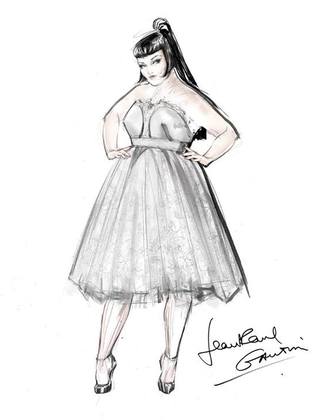 Jean Paul Gaultier released his sketch for Beth Ditto‘s wedding dress earlier today on Facebook, with his congrats for the new couple. As we reported yesterday, Ditto wed her longtime girlfriend Kristin Ogata in Maui recently and shared a wedding shot on (where else?) Facebook. Though we’ve gotta catch these kids up and spread the 411 that the new place to debut anything is on Instagram, as evidenced by Oscar de la Renta’s successful campaign debut on the gram of insta.