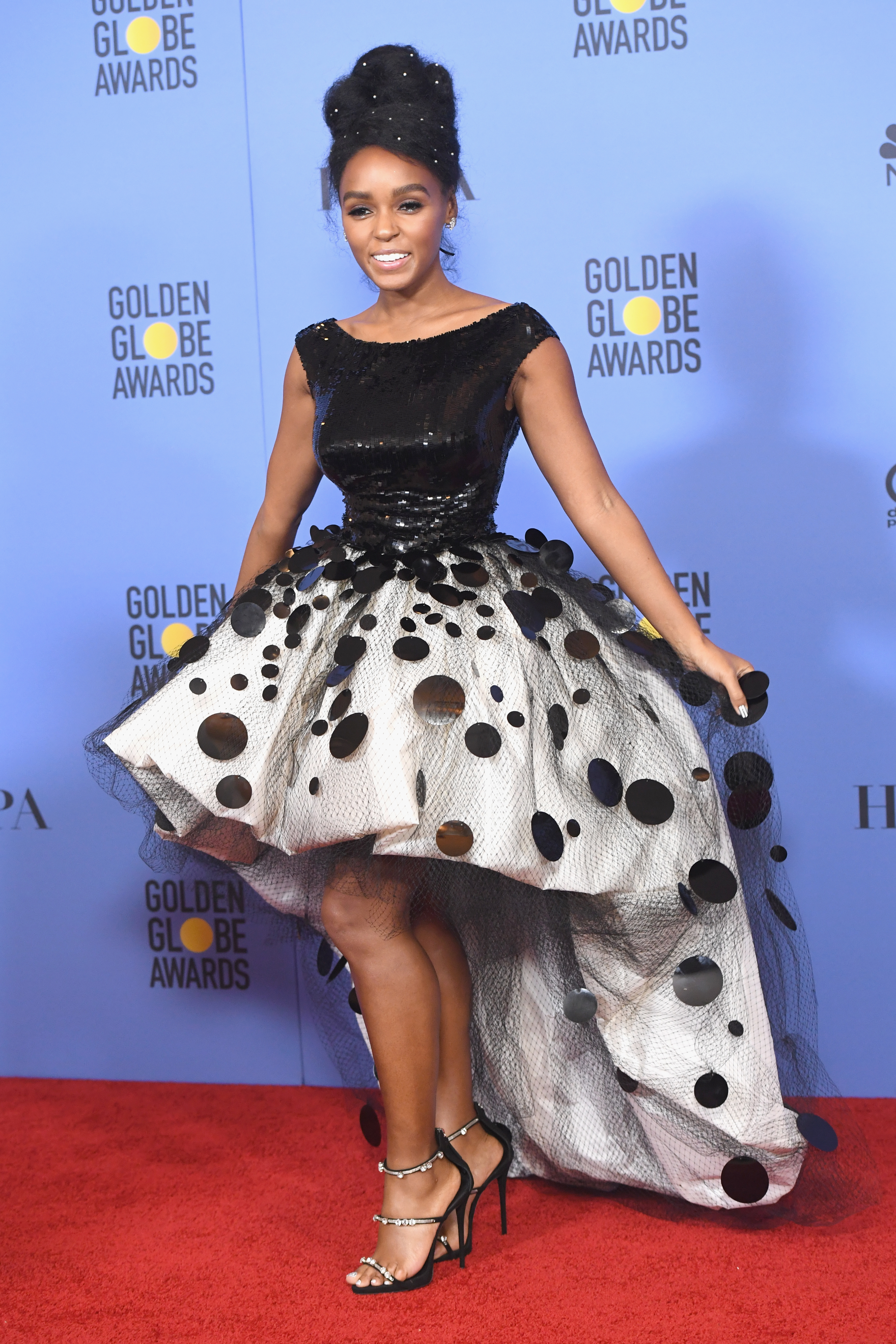 Black and white was the theme of Janelle Monae’s ensemble at last night’s Golden Globes, and it’s apparent that her stylist Maeve Reilly had a master plan. The singer, who made her acting debut in Moonlight, the film that took home the award for Best Picture, Drama, made a red carpet statement in custom Armani Prive and Forevermark Diamonds, and Reilly says Janelle’s face lit up the moment she tried on the sequin and polka dot number. We talked to Reilly about the look, working with Janelle for the past four years, her background in styling, and who else she’s dressing these days.

How did you and Janelle decide on a custom Armani Prive for last night?
They had reached out really early, around the end of October. We had a relationship with them in the past and knew we’d be in great hands. We sent them some ideas we had ourselves—we definitely wanted to do something high-low with volume—so they came back with some different sketch options. We went back and forth twice, and between Janelle, myself, her publicist, her manager, friends, and family, we voted on that dress. It was honestly a wonderful, easy process. The Armani team is incredible!

Do you think the dress could’ve worked on an actress like Emma Stone?
I don’t think that particular dress could be pulled off by anyone else, and that’s why we loved it so much and why it was an obvious choice. Not only was it so specific with the color palette, but it was still so her—quirky, fun, and youthful. When she put it on, her face lit up, which is what you want. I will say I was really surprised and impressed by the carpet last night. I thought a lot of people took risks and a lot of actresses who maybe haven’t in the past definitely amped it up. I think there was sort of a theme, and Janelle definitely fit in really well with it. Originally I thought she’d be the musician-turned-actress who’s edgier and quirkier than most actresses, but at the end of it all a lot of people went in that direction.

Besides Janelle, what other looks topped last night?
I loved Kerry Washington, Naomie Harris, and Ruth Negga. I loved seeing people take risks instead of being just pretty and safe.

What’s your ultimate goal when dressing a client for an awards show?
The most important thing is that they feel like they’re representing themselves to the world in the way they want to feel—that’s what my job is really about. Someone like Janelle, whose clothes are such an extension of her brand—if she feels good, I feel good. After four years of [working together] I know her so well—I just know when she is loving a dress.

You also dressed Hailey Baldwin for the InStyle after-party.
It was a pretty mature dress for her! We usually go a lot sexier. Granted the slit was super high, it was still a different feel for her. It was the mood she wanted to go for—she wanted to feel more mature and polished and I think the [Elie Saab] dress hit the mark. For me, it’s never about pushing a personal agenda. It’s about how they feel.

Do you pay attention to the best-dressed list?
Yeah, I do—I definitely look to Vogue, you guys, and the big heavy hitters. It’s important to me and why I do my job, but other times, if I feel really strongly about a look I don’t care if people don’t like it. But to be perfectly frank, Janelle’s almost never not on it, so it’s a good reason to pay attention! We are really diligent with the pieces we choose—the team, not just me and Janelle, but all the people who are involved in the choices we make, which is why I think we’re consistently strong. Her looks are really critiqued by us, in the best way, before everybody else.

When did you start your career in styling?
Twelve years ago when I was an intern at a TV show that my dad executive produced on the Hallmark Channel. He was like, “Girl, you need a job,” but all I wanted was to have the summer off since I was going to college. I just wanted to hang out with my boyfriend! I didn’t know what a stylist was, but my dad basically forced me to get an internship. I fell in love with styling. When I moved to LA six years ago I started working with Jamie Foxx and Russell Brand. I was working with all men until I met Ms. Monae. That’s also why she hired me—because I could tailor a suit, which is all she was wearing at the time. It’s been a long journey for me—I appreciate all the accolades now, but it’s definitely not an overnight job. It’s been a long road with a lot of hard work. 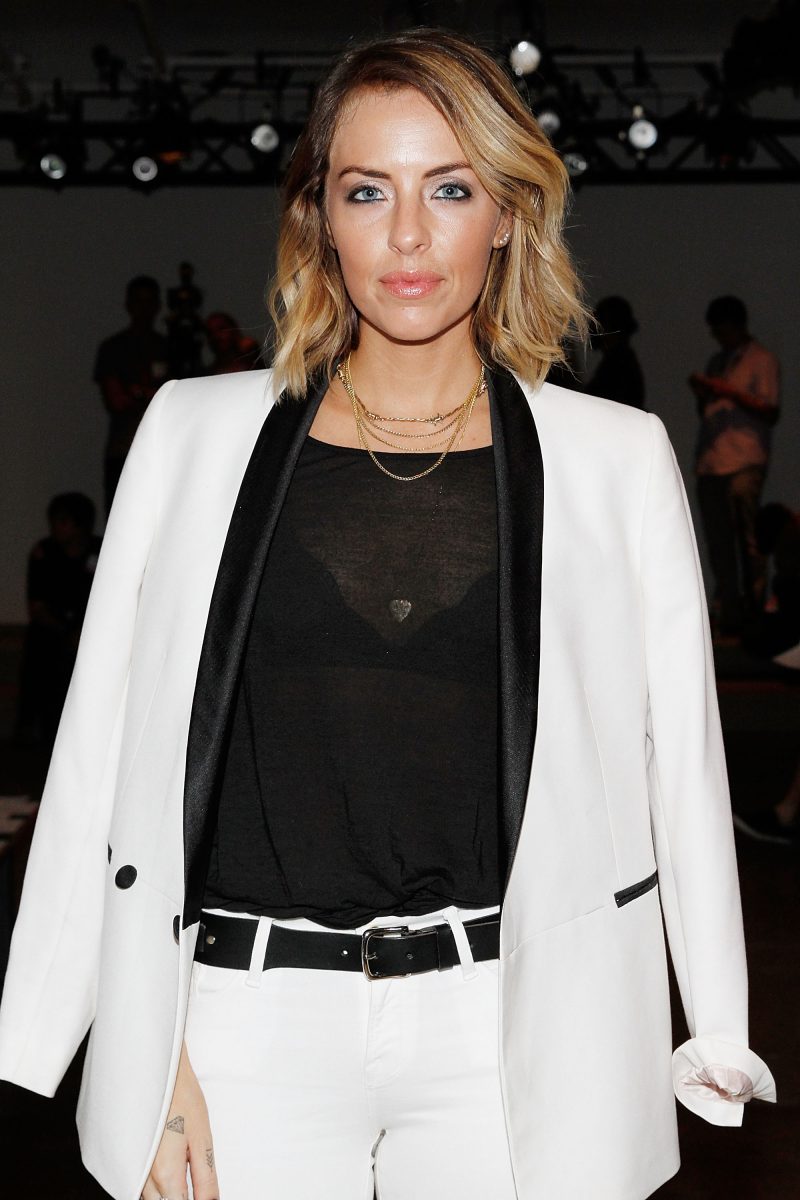 Who else are you working with these days?
Halsey, who has some new music coming out soon, which I’m excited about, and Jordan Fisher, who’s in Hamilton on Broadway.

Were there any looks you really disliked last night?
I’m going to plead the fifth on that one! 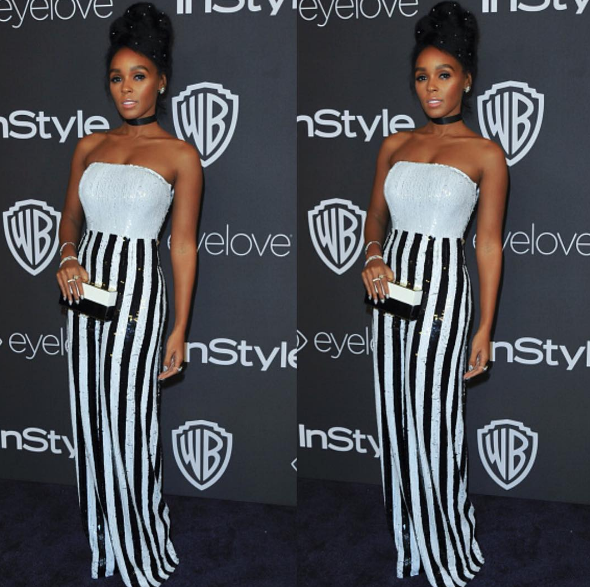 The Golden Globes Instagram Breakdown: Who Had the Most Likes? Who Has the Most Followers?

How Stylist Maeve Reilly Is Creating Those...