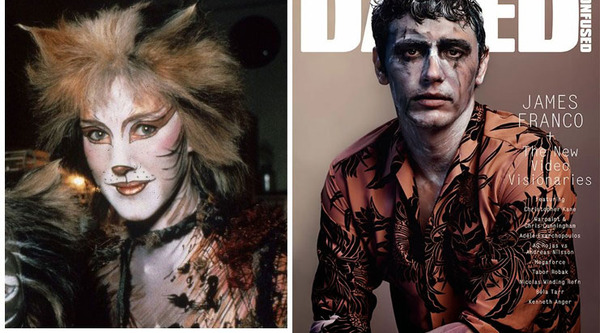 James Franco pays homage to the Broadway musical Cats on the cover of the latest issue of Dazed & Confused. OK, maybe that’s not where he was going with this, but it did cross our mind. Josh Olins shot Franco, the latter of whom continues to hold the world record for never saying no to anything, ever, ever. The new issue, which hit stands yesterday, is also the inspiration for a new online series, Visionaries, launching next week. They asked over 50 auteurs from Bjork to Kim Jones to take over their video section for a week at a time to premiere their own original work. Obviously Franco got in on the action and is their first curator, premiering a “surreal self-directed art film about a masked couple who invade a gallery and run riot with a ton of paint.” Just a typical Tuesday for him.

Designer Katie Ermilio On Her Fashionable Genes And More

What Does Carlyne Cerf de Dudzeele Really Think Of Bloggers?

Kate Moss Enjoys Another Visit To Her...