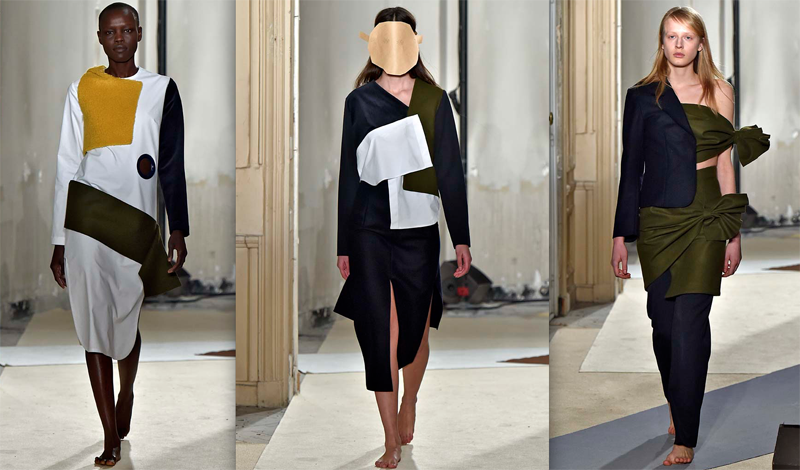 Simon Porte Jacquemus is young (he’s only 24!) and making quite a name for himself on the French fashion scene. He played up his youth in his Fall 2015 collection, offering up wares that sort of harkened to playtime in preschool. While they definitely weren’t designed by a tot, they had an underlying playful, naïve tone, something that Jacquemus has become synonymous with. Skirts were fashioned out of mere scraps of fabric, while shirts were haphazardly pieced together from swaths of crisp poplin and wool. Plenty of mods were sent down the runway completely topless, with their visages shrouded by masks. Meanwhile, oversized details added polish to the unexpected silhouettes, like enormous grommets offering up a peek of skin or as a vehicle for a big belt. A hybrid blazer/crop top look was emboldened by a tie detail jutting out to one side, while two black hands emerged as an off-the-cuff top. Topping off the unfinished feel to the collection? A total lack of shoes on this runway. Even Jacquemus himself took a barefooted final bow.

TOMS Debuts A Nolita Boutique Plus A Handbag Range