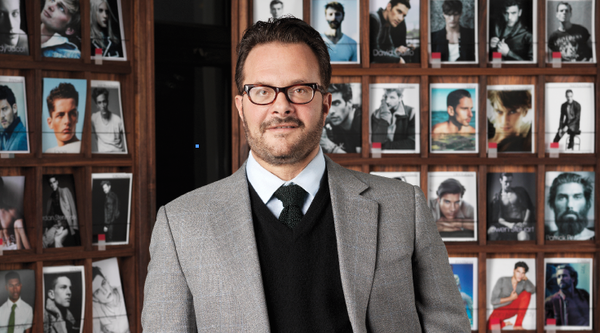 (NEW YORK) IMG Models maestro Ivan Bart has been guiding the careers of fashion’s top girls since Karlie was in nappies. Now, he’s on a mission to change the way we look at women. Are you ready?
BY EDDIE ROCHE

You were a psych major in college. Does your training come in handy?
Of course! Every day I’m dealing with people’s issues, whether it’s a model that’s having a breakup or a manager who has an illness in the family. It’s part of the job description. For models—as glamorous as their lives may seem—it can be pretty lonely. They don’t know if they’re flying to Rio or Peru tomorrow, or if this person or that brand is going to book them. There are a lot of unknowns, and nobody likes to always live in limbo. It’s also hard for them to build relationships when they’re flying around the world constantly. So, yes, my training is quite useful.

Do you warn newbies about the pitfalls?
In the very first interview, we always ask them why they want to model. You see a lot of people with stars in their eyes that think it’s all glamorous and wonderful. They imagine models just travel the world and hang out in limos. That happens, sure, but you’ve got to work for it. It’s also a lot of pounding the pavement and being judged solely on what you look like, which is hard for even the most confident human being.

So what’s the right answer?
It’s great if they say that they love being photographed and are sincerely interested in fashion. I remember Stephanie Seymour looking at a rack and saying, ‘I can flip a skirt this way and move this way to make it look elongated.’ She understood that her job as a model was to make the clothes look amazing.

What happens after they pass the test?
Once we sign someone, they go into development, which is where we educate them on how to walk into a room and completely own it.

Do female models still have an expiration date?
Everything’s transitioning and changing. Many of our most successful models now are 40 and over, which is a huge shift. Look at Kate Moss, who’s having a hell of a year, or Carolyn Murphy, or Stephanie Seymour. If you’re good at what you do and love the business, you’ll stay around. I predict Karlie Kloss will still be modelling at 40, no question. Our society has changed and people want to see real women. One of the most exciting moments for me in 2013 was booking China Machado for Cole Haan. She’s 83-years-old!

What girls do you work with directly?
At this point I’m running offices in New York, London, Milan, Paris, and now Sydney. I spend most of my time working with the managers, but I still dip my hand in to work with a few. I’m very involved in Carolyn’s career, and I also do a lot with China, Karlie, Chrissy Teigen, and Kate Upton. But if I can add value to anyone’s career, I will.

Who’s your all-time favorite model?
Oh, dear. [Long pause] That’s like asking a mother to name her favorite kid! I’ve had so many inspirational experiences with so many different women. Right now, my inspiration is really the men. There have been supermodel men in the past, but lately it’s just a revolving door. We want to bring back the male supermodel.

Sounds doable. A few years ago you told us to keep an eye on Kate Upton. Who’s next?
Gigi Hadid all the way. She has tremendous potential. She walks into a crowded room and you can feel her presence. Everyone is like, ‘Who is that?’ I can’t help myself when someone like her comes along. I get on the phone and just start calling people. She’s done a few shoots lately that are going to be game changers. We’ll be seeing a lot of her from the second half of 2014 and into 2015. I have a very good feeling about this girl.

Is there a particular look brands are after right now?
Healthy, sexy, and naturally beautiful. We’re also really trying to push diversity. We’re selling talent, so by introducing men, women of different sizes, and various backgrounds, we want to be weightless, genderless, and ageless. We want to represent the best of every body type— more size sixes, eights and 12s. There are people who are naturally thin and can slip into a size zero, but I’d really like a more diverse group. I don’t know why it’s so set on the sample sizes. I don’t know why we can’t see what a good size eight looks like on the runway.

So you’re actively trying to change things?
I mean, I can’t convince anybody to choose an aesthetic that they don’t feel is right for them, but I can try. Had we not tried, nothing would have changed. Either you sit back and let people say what they want, or you sell them something, which is our job. A lot of these top models would not have made it if there wasn’t someone behind them pushing. It’s like when you walk into a department store and see a fabulous coat you’ve never seen before and aren’t quite sure if it’s right for you. You need a great salesperson telling you to put it on and just try it! That’s all I’m asking people. I’m asking them to try something new and see if they like it.

What makes this the right time for your new vision?
When you think of a business growing and diversifying you think of new ideas. I started thinking about it in 2010. It was like, Okay, we have Gisele [Bunchen], we have Kate, and we have all these other top models. What’s next? So we relaunched the men’s business in 2012, and they’ve been a great addition. We also signed Tara Lynn, who’s a plus-size model, and who was just on the cover of Spanish ELLE in November. That just says to me, Oh, right, we can do that, too! She wasn’t on the cover because she was a plus sized model; she was there because she’s a beautiful woman.

So all this sounds promising, no?
Don’t get me wrong, it’s a wonderful industry and the models walking down the runway at MBFW are all great, but why can’t we see something else, too? Why can’t we ask the question? That’s how change happens.

Speaking of changes, Joan Smalls was on the cover of ELLE’s January issue. Do you see the glossies shifting back to models?
I do. I think there’s real celebrity fatigue. We all have it. The public doesn’t want to see a 20-year-old singer fronting a campaign for an anti-aging cream, and they don’t just want to see celebrities promoting their movies. The thing about models is that they allow you to fantasize and project how you feel when you see them, because you don’t really know them like actors.

Do you still love your job?
I really do! There are such tremendous opportunities right now in so many different areas that it’s hard to get bored. Society has evolved, and I just think the fashion community has to evolve, too. We’ll get there.