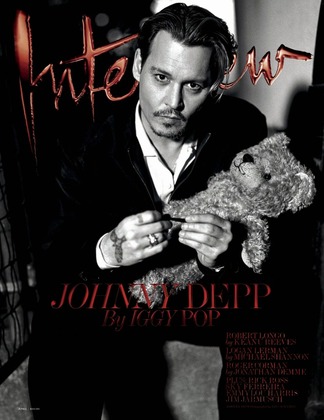 Bruce Weber shot Johnny Depp avec a teddy bear for the latest issue of Interview, and the 50-year-old-actor shared his feelings on reality TV for the cover story. “People get famous for I-don’t-know-what,” he tells Iggy Pop. “People have reality shows because they’re a Hollywood socialite, and these things become very successful. It is like watching a fire. You can’t take your eyes off of it.” Depp also reveals that his first acting role was working as a telemarketer: “I marketed pens – on the phone,” Depp recalls. “But the beauty of the gig was you had to call up these strangers and say, ‘Hi, how ya doing?’ You make up a name like, ‘Hey, it’s Edward Quartermaine from California.” Ha! Anybody who has ever watched General Hospital will get that reference.

Look of The Daily: Katy Perry in Versace