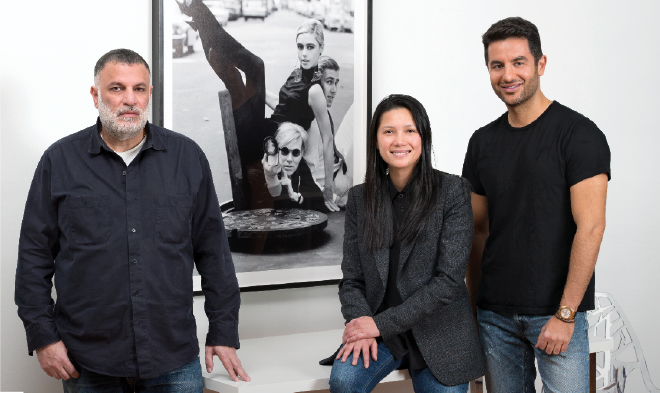 Fresh from the pages of the first issue of The Daily’s Models Issue: It’s been a little over a year since Ali Kavoussi, Christiana Tran, and Louie Chaban got their roar on to create their very own agency, The Lions Brand, with top talent like Anne V, Karen Elson, and Jessica Hart.

What’s the history of the company?
Ali: I came here about a year ago to start the Lions Brand, and Christiana and Louie joined me. We worked together in the past, so we knew we would be good partners.

How do you all know one another?
Louie: I worked with Christiana at DNA, and when I went to Women, Ali and I started the same day.
Ali: I’ve been doing this a long time and we all have such different styles, but watching what we did together as a group was magical. We started and revamped so many careers. There was nobody else in the industry I wanted to work with.

What do you each bring to the table?
Christiana: We have three distinct personal management styles. Ultimately, they all complement one another. At the same time, we share an overall vision. Personal management is the heart of our business, but we’re also a branding agency.
Louie: I love to work on image.
Ali: I have a more commercial eye. I love sexy girls. I like taking the commercial underdog and getting people who might not like her to like her. It’s challenging. When there’s a girl that everybody wants, it’s easy. When there’s a girl that everybody knows they don’t want, I’ve been good at revamping that impression.

How do you find the new faces?
Ali: Christiana spearheads scouting. We’ve also had a lot of friends who have contacted us to tell us about great girls.
Christiana: We’ve built relationships with other agencies around the world, and that’s an integral part of the scouting.

Do you go to the conventions?
Christiana: No. I’ve done a lot of those, but it’s really like finding a needle in a haystack.
Ali: We’ve sent a junior assistant to some because people have reached out to us, but it hasn’t been a primary focus. Other agencies have scouts going to everything.

Who have you worked with the longest?
Ali: I’ve been with Anne and Jessica for 11 years.
Louie: I started Karen Elson years ago and she’s been with me for about 17 years. We’re like siblings. She’s had a great career because not only is she a great model, but she’s had pretty good management! We try to integrate things outside of modeling. Karen is a musician, Agyness is an actress, Guinevere designs jewelry. Our talent is completely well-rounded.

What’s it like when a client walks away?
Christiana: It’s a challenge, emotionally, but I look at it in a healthy way.
Louie: Every case is individual. Sometimes you feel rejection more than others.
Ali: It’s happened to me a couple of times, and I was really upset, but the girls ended up coming back.

Was opening up your own agency always the plan?
Ali: I was waiting and waiting. I didn’t know how I was going to do it, but it was in the cards. A big part of my career was spent fulfilling other people’s numbers and dreams.
Louie: It was definitely inevitable! I don’t remember ever really working for someone that I truly liked. That could be my problem! I’ve turned agencies around and haven’t really felt the reciprocation. These days, most people who own agencies don’t know anything about the industry. It’s hard to keep your passion going working for someone who doesn’t have a clue about what you do. Had this not happened, I might have ended up doing something else in the industry.
Christiana: Without a doubt! I’ve been around for a long time. One of the things that stunted the creative process in other companies was the bottom line or a corporate environment.

Why are girls sticking around longer these days?
Ali: A lot of it has to do with the photographers.
Louie: The industry has changed—people want names. They also want a girl who can show up and be a slam-dunk. They don’t want to take chances on a new face. It’s much harder to develop a new girl than it used to be. Very few photographers want to take the time—they want a girl to come in and know exactly what she’s doing.
Christiana: I noticed a very noticeable change during the most recent recession. Designers or companies didn’t take as many risks.

How do you develop new talent?
Louie: A lot of it has to do with personality now. I used to say it was 50 percent of the equation, but now it’s 90 percent. Even the most beautiful girl doesn’t last five minutes if she doesn’t give it to the camera.
Ali: Social media is such a big component. I had to have a conversation with the girls and tell them this is no longer your personal account—it’s part of a lucrative business, and the way you portray yourself is important.

Which photographers do you work with?
Louie: Quite a few! Steven Meisel, Inez and Vinoodh, Tim Walker, Mario Testino, as well as some of the lesser known, but very powerful, ones. We also have great relationships with designers like Marc Jacobs, Anna Sui, Riccardo Tisci.
Ali: Carlyne Cerf de Dudzeele is like family.

What is it like to work with Meisel?
Louie: Part of the reason I’m in this profession is because he encouraged me to do it. He’s an old friend. I don’t think I’ve ever asked him for a favor, but I’ve certainly sent him girls. If he likes them, he’ll work with them; if he doesn’t, he doesn’t. With someone like Inez and Vinoodh, whom I’m also friends with, it’s a little more of a business.

What makes you good managers?
Ali: We always put the models first. A lot of our competitors work for the client, but for us, the client is the model.
Louie: A lot of agents work day to day, but good managers have a sense of where a career should go. Imagination is key. Where do you want to see this career 10 years from now? What we do is create hype, myth, and illusion.

PLUS! Lovefest From The Lionesses
Irina Shayk: “I have been with Ali pretty much my entire career. He has inspired me, pushed me, and most importantly, never given up on me. As a result, we have developed a special bond and a partnership based on mutual respect and trust. Ali doesn’t see just one thing when he looks at models. He sees the layers that he will peel off. He does it with great passion and full commitment to build long-lasting careers.”
Cameron Russell: “I love working with the Lions team. They have a real respect for me and my work and recognize that there is no simple formula to build a career. Christiana has supported me in making many nontraditional decisions, from choosing university classes over important jobs to giving a TED talk about image and fashion. Without her, I don’t think my career would have lasted so long.”
Jamie Bochert: “For me, it doesn’t get any better than Louie. He’s not just the best agent; he’s also a person with the best heart and mind.”