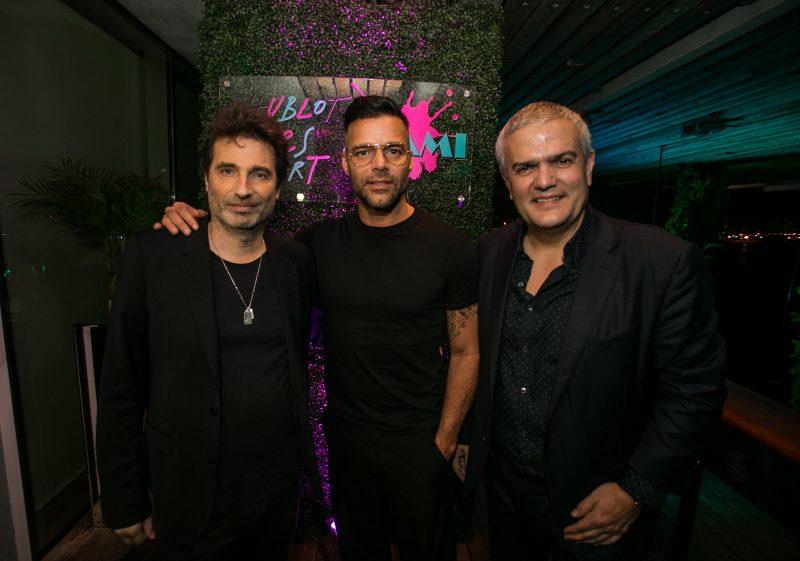 Hublot celebrated its sixth year of doing events and special projects linked to the art world at Art Basel Miami this year as part of their #HublotLovesArt program. The luxury Swiss watch brand is led by watch legend Jean-Claude Biver, who owns a minority stake in the company, and by CEO Ricardo Guadalupe. This year, the brand launched three new watches in collaboration with artists including street artists Tristan Eaton and Hush and French sculptor Richard Orlinski. To kick off the brand’s week-long series of events, Hublot held an intimate event in their Bal Harbour boutique to unveil their new “Fame vs. Fortune” watches, which were first unveiled in New York City at the end of last month just before Art Basel. Tristan Eaton, who was collaborating with the brand for a second time, created the Fortune watch inspired by Wall Street and New York City while Hush created his first watch for Hublot called Fame, which represented Hollywood and the West Coast hustle. The duo unveiled their respective watches which feature their art on the back of each watch’s case back and signed renderings of the artwork for each guest at the event. 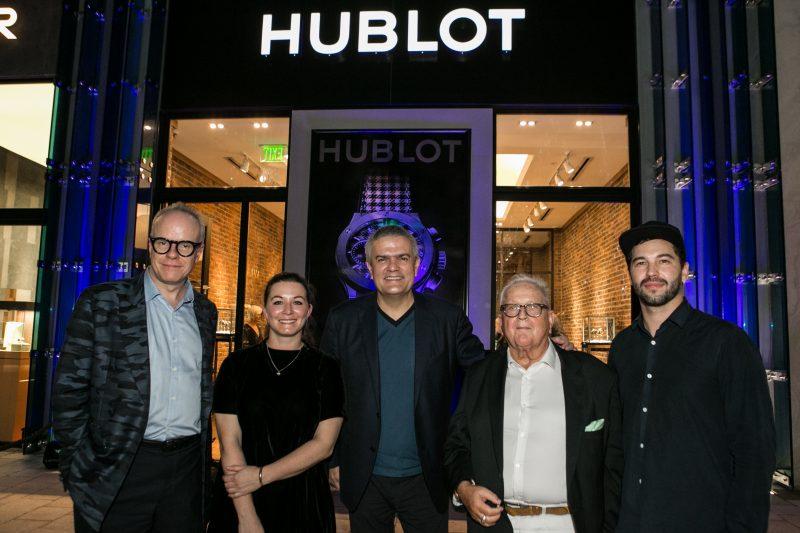 Next up, the brand hosted an event in their Miami Design District boutique (their second location in the city) to celebrate The Hublot Design Prize, which is currently in its third year. “For us it was really important to start the celebrations we are having in Miami with The Hublot Design Prize,” said Hublot CEO Ricardo Guadalupe. “Hublot represents the Art of Fusion in watchmaking, connecting tradition and innovation. At Hublot, innovation is very important for the brand. We always say, ‘For us no innovation, no future.’ So it’s important that we have this creativity and innovation in the watchmaking industry.” The prize is chosen by a jury independent of Hublot and was created with Pierre Keller, the famed former director and founder of ECAL, Switzerland’s university of design and art based in Lausanne. “The Hublot Design Prize is the most important recognition for young designers and the winner takes home 100,000 Swiss Francs each year,” said Keller. “We try and discover young designers who try to really be on the edge of new design. When you speak about design, everyone thinks of a chair or a table or something like that, but we discovered fantastic designers doing things out of the realm of what you can imagine.” He was hardly exaggerating. This year the prize went to Carolien Niebling for her ideas and design concepts on the future of food in her tome The Sausage of the Future, which explores sustainable food ideas through the process of sausage making. “We have been consuming sausages for 5,000 years, but her book isn’t only about the history of sausage, but also a really important reflection about the reality of food today and a reflection of how we can make food more sustainable,” said Hans Ulrich Obrist, the Swiss-born artistic director of the Serpentine Galleries in London. “Three years of meticulous research has gone into this book.” Obrist, who has been called the most powerful figure in the field by ArtReview, sat on the jury for the prize this year. So what’s so great about this unlikely theme for a design project? Niebling has developed new techniques for the age-old food process to create things like a vegetarian salami that doesn’t have to be refrigerated and can last up to two years. “We looked at many different proposals and the meeting happened in the Serpentine Gallery, designed by the late great Zaha Hadid,” said Obrist. “I want to remember her here in Miami, a city that was so close to her heart and where she spent so much time. And Zaha, of course, told us that there should be no end to experimentation and I think that is very much at the core of what we are doing with this prize.” Guadalupe added that the idea behind the design prize was also to find designers that might also offer Hublot some ideas for the future. “Our winner from last year, Christophe Guberan, was developing some new techniques in 3D printing and we can really imagine how we might be able to use this technology in our watches one day, for instance,” said Guadalupe. “We believe we always need new sources of inspiration. We want to be leaders in our industry and come up with new ideas.” 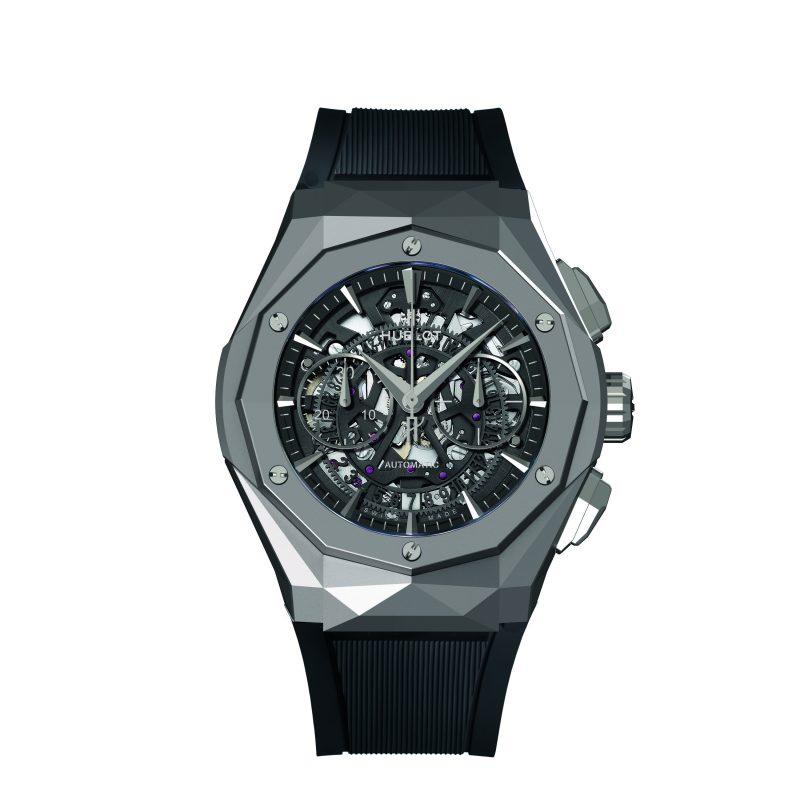 Rounding out their series of events was the unveiling of the brand’s new watch with French sculptor Richard Orlinski, who is known for his geometric large scale sculptures often featuring animals. The Classic Fusion Aerofusion Chronograph Orlinski is available in two models in titanium and blue ceramic in a limited-edition of 200 pieces. Orlinksi unveiled his new design at the brand’s Miami Design District boutique and told The Daily that, as a watch collector himself, he worked closely with Hublot on the design and was interested in the process of doing something on such a small scale compared to his much larger sculptures in his art work. “Hublot is the only brand that has allowed me to do something different—not only just to customize a watch, but also to create a real watch from scratch,” said Orlinksi. “I’m also a watch collector and have been collecting watches since I was very young, so I really know this universe. I was invited to the factory. I normally work with large things and they are working with very, very small things so it’s incredible to see the process. I don’t collaborate with a company unless I feel like it’s a win-win.” Expect to see more of Orlinski’s designs with Hublot in the future—the artist said that there were plans for other watches down the road and he hopes to continue building on his story with the brand. “We always try to have an evolution in our partnerships,” said Guadalupe. “We want to continue working with the artists that correspond well with what Hublot represents.”

The Orlinski unveiling was followed by a grand rooftop dinner at the Perez Art Museum to celebrate the new watch. Ricky Martin was the guest of honor at the event and was joined by friends and family like his fiancé Jwan Josef, his brother Daniel Martin, and Martin’s longtime manager of 31 years, Jose Vega. The singer kept a low-profile at the event mostly having a good time with his close friends and family. The dinner was held specifically for Hublot collectors and guests were treated to Dom Perignon and specialty cocktails as well as cigars before sitting down to a dinner of steak and branzino.

Next year the brand also has big plans as it prepares to sponsor the FIFA World Cup in Russia in June.