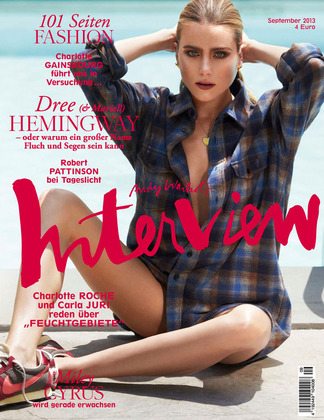 Another fresh cover from our friends at German Interview who go where no (or very few) magazine dares to go and put their logo right in the middle of the cover. Brave! Dree Hemingway covers their September issue, donning a flannel shirt, with Emily DiDonato and Charlotte Gainsbourg fronting alternative covers. Hemingway tells them what she really thought of that other famous Hemingway’s work. “I had to read “The Old Man and the Sea” in school and barely made it through, I was so bored,” Hemingway tells the mag. “People kept staring at me, expecting me to love it. I mean, those people had read American Literature at university and were huge fans of Ernest Hemingway. They were obviously freaking out about his great-granddaughter taking their classes, but she didn’t give a shit.” Hilarious.