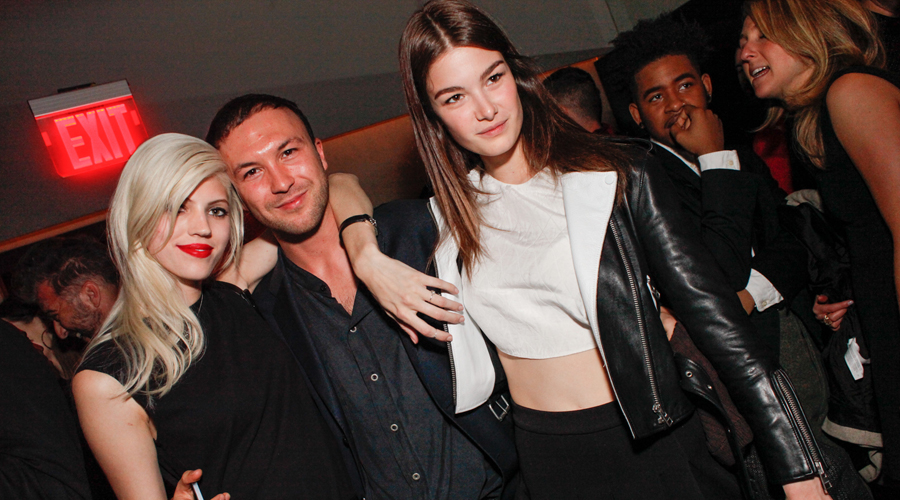 (NEW YORK) Document mag feted the launch of issue No. 4 on Friday night, and kicked our weekend off at the Hôtel Americano in Chelsea. For the uninitiated, Document’s culture-fed content is geared toward not just fashion, but beauty, boasting features on art, architecture, and literature as well, keeping in mind how disposable content can be to consumers today and striving to create something that is worth keeping. Since the biannual luxury glossy co-founded by Nick Vogelson and James Valeri debuted in September 2012, a slew of high-profile contributors have collaborated on the book, which was created to fill the void of an American publication that was as “fresh” as comparable European periodicals. This time around Document addresses the zeitgeist with Liya Kebede and Bethann Hardison on the topic of diversity in fashion, Willem Dafoe and Erykah Badu on individuality in film and music, respectively, and hair visionary Didier Malige and stylist Joe McKenna look back at fashion past and forward in anticipation of the future. (Not to mention stunning editorials styled by Document’s own fashion director, Valeri, and fashion editor Jodie Barnes. Spring/Summer 2014 also welcomes Malgosia Bela and Freja Beha Erichsen to the roster of Document cover models including Karlie Kloss, Lindsey Wixson, Kebede, and Andreea Diaconu.

Downstairs at Bar Americano, the Brazilian-style bar served each individual their own personal poison and for the adventurous: a shot of their signature, house-made Mezcal. We rubbed elbows, literally, in the crowded basement with the likes of Camilla Akrans, Daria Strokous, L.A. Laker Nick Young, Oh Land, Mark and Alexis Abrahams, Ophelie Guillermand, Mark Holgate, Chiara Barzini, Tony Irvine, Livia DePaolis, and Alice Lane while the group collectively pulsed to sounds by DJ Honey Dijon and DJ Wreck Tech.

With their fill of Euro-dance beats and Peroni, the set of downtown scenesters wound down (or moved on, rather?) surprising early around midnight. We’re not going to say it had anything to do with the appearance of the Narcissister clones in nothing but their dancing shoes and the guise of their doll-face masks…It was probably just a coincidence.
JULIANNE ZIGOS

Shot Of The Daily: Peter Marino and Marc Jacobs Get Free

W Magazine Releases ‘I Am A Woman’...

Stars and Their Kiddos Attend Screening of...

Liya Kebede on Her Gurney’s Pop-Up