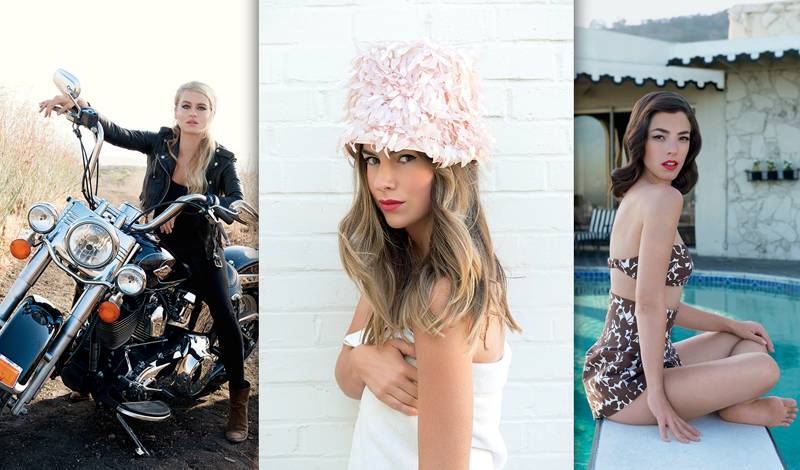 When Vogue alum and photographer Claiborne Swanson Frank met Michael Kors, it was a match made in heaven. The two have collaborated on Frank’s latest project, the portrait book Young Hollywood, which features portraits by Frank and clothes by Kors. So how did the magical images come about?
BY EDDIE ROCHE

How did you come up with this idea, Claiborne?
My first book, American Beauty, came out in 2012. I shot over 100 women for that. After that my husband got a job offer in L.A. and I kind of had this moment of “What’s the next body of work about?” The book is about all these girls on the verge. I thought Hollywood was an amazing place to dig in and tell a new story.

What did you do when you worked at Vogue?
I was Anna Wintour’s assistant. That was amazing; the best thing I ever did was work there. It was so frightening for me and such an education.

How did you transition to photography?
I always loved photography and went to Vogue in the hopes of being a stylist. Now I style all my work; I style everything. I pick the locations; I shoot. In the case of Young Hollywood, it was about the marriage of old and new, telling a story through these iconic homes, landscapes, old cars, and diners.

What were some of the cool locations you used in L.A.?
I’m from San Francisco, so I have a great love of the West Coast. I did a ton of research, and had an ongoing list of what I felt was super important to shoot: a motorcycle, an old car, a mid-century home, the desert, the beach, the lifeguard chair, a circus.

So the clothes were all vintage and current Michael Kors?
It was about 50/50. Michael was wildly generous in supporting my book and opening all his beauty and fashion collections for me to use. You really can’t tell what’s vintage and what isn’t, which really also speaks about his brand as well…how iconic his collections are.

How did you meet Michael?
I did a very small collaboration with him in the fall of 2012, styling 10 girls from my first book with the fall collection. So I pitched the idea about my second book to him. I think it was very much an act of faith [on his part.] Having such a brand backing my vision was such an honor.

What did Michael say about the final product?
He was thrilled. He loved it. I think it’s a fun project for Michael to be connected with this next generation of Hollywood.

Where there any particular actresses whose stories spoke to you?
I think Isabel Lucas was pretty much my cover choice for a reason beyond how beautiful she is. She is focused on creating from such a positive place, being accountable, and having integrity and substance. I love the cover with Isabel Lucas. It’s the idea of hope, of who she is, who she will be. I love that shot in the canyons of Malibu with the unique Californian light.

PLUS! Michael Kors On Young Hollywood…
“I first saw Claiborne’s work in her book American Beauty and it immediately caught my eye—her style is all about laid-back American glamour, which I love. I was also intrigued by this idea of Hollywood that she wanted to portray—it’s not an approach that we are used to seeing. She manages to transform [the stars] through the clothes and the styling—Ireland Baldwin looks like a model from the ’50s. The book captures the idea of transformation, glamour, and possibility, which is what we want from Hollywood. [I love] the spirit of it. These women are not like the Hollywood players from the ’20s or even the ’60s—they’re looking to make their mark on the world in ways that no one has before them. They’re doing it all.”