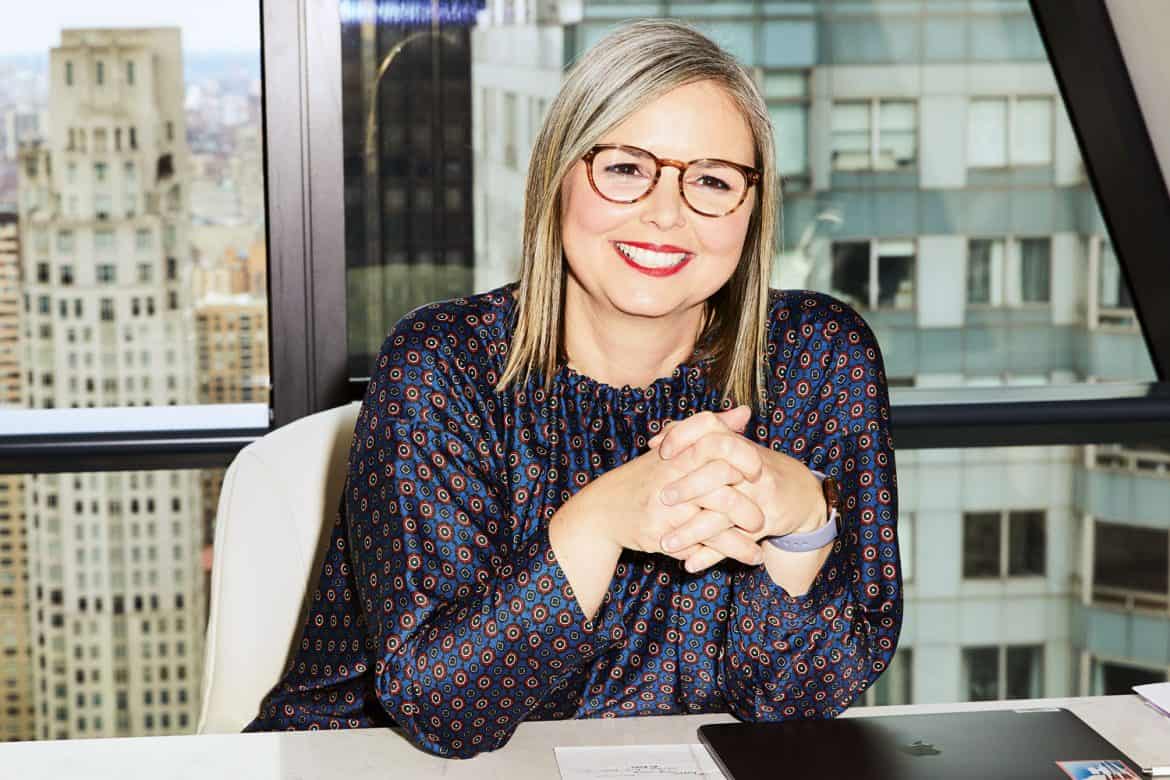 Hearst’s Kate Lewis reveals her strategy for navigating the publishing world in period of unprecedented change. 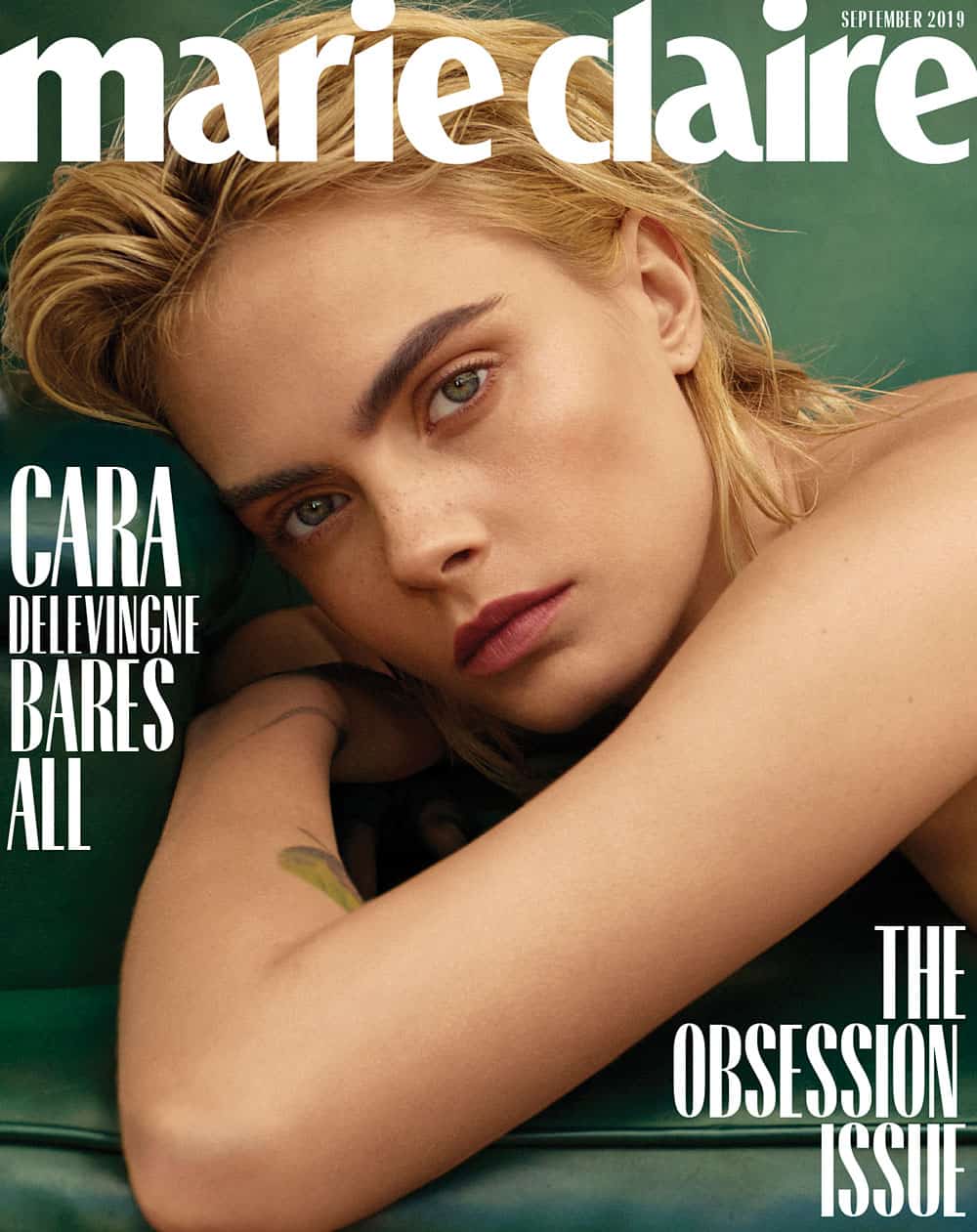 You’re a year into your chief content officer position. How’s it been so far?
One of the things I delighted in when I was in the digital role [as Hearst Magazines Digital Media’s SVP and editorial director] was the collaboration and communication across the brand. There are too many editorial leadership people to get everyone in a room and think it will be productive; you’re not going to be honest and open. So we’ve broken out a bunch of smaller groups meeting as courses, to tackle everything from sponsored content to, “What should the Front-of-Book look like?” to “How do we work with celebrities?” Many print EICs already have relationships with each other, but getting people who aren’t—or are—on the same kind of brand to talk was a personal goal for me. Another goal for the company was having brand teams begin to coalesce. My thinking: it isn’t so much about integration, which is the word people use, but more that content teams should think of themselves as platform agnostic. You’re not a print editor, video creator, web editor, or social editor. You’re a person who makes great content and delivers it across whatever platform that content is appropriate for. That’s why all of our teams now co-mingle, to a degree; some are fully integrated.

What are you in the weeds working on now?
Video. It hadn’t been a priority for a long time, and obviously having a greater mandate, it’s been easier and harder at the same time to execute. A couple months ago, we hired Zuri Rice, a new SVP of video [head of video development and content strategy for Hearst Originals], and we bought Clever, which is a YouTube channel, and it helps us understand how to accelerate our own growth on YouTube. For example, we have a hit series, Seventeen, called Bestie Picks Bae.

How do you prevent burnout among staffers, when multiple jobs fall on one person?
This is a conundrum, actually, that we go through all the time. Can you dig in deeper if you’re on a single brand? Probably, but could you burn out faster because you’re in a certain place? That may be, too. Because we now have a much more transparent and fluid conversation around content creation, from brand to brand, it means that people will move around. We have a star player on Delish who came from Cosmo. We have a star player on House Beautiful who came from Delish. We do try to take people and give them opportunities in other places here because I think you’re right—you don’t want to do the same thing over and over, year after year. I mean, one thing that’s nice about right now is that everything that we hold sacred today will be irrelevant tomorrow. You could be a writer on Esquire and that job over the course of a year might change a lot.

Does it help with retention by not having staffers as pigeonholed?
The DNA of Hearst—not just the magazine division, the whole company—is one of loyalty. I want the people that we have grown and raised and taught to stay with us not to walk away with all these valuable skills. We want to make sure that people feel like they can develop here. Troy says that we are in the transition from hierarchy to hive. There is a lot less upper management structure. My management team is very small.

Has this hive instead of hierarchy approach changed Hearst’s hiring strategy?
Our new head of HR, Keesha Jean-Baptiste, is my favorite person. She came from advertising, so she wasn’t a person who had been finding magazine people to work on magazines. We make sure to find a mix of people, including those who maybe don’t have the right experience at all, but come from a different place and bring a different perspective.

How are you feeling about the media landscape in 2019, beyond Hearst Tower: The good, the bad, the sad, the ugly…
The state of the industry makes me hopeful because never in all our days has there been more consumption of this content. I’m a little bit obsessed with Tina Brown’s Vanity Fair Diaries, which is a phenomenal, wonderful read. If you have the time, listen to it; she reads it herself and she’s just such a raconteur. In her big heyday of Vanity Fair, the circulation was in the hundreds of thousands, and it was a huge, huge win. Right now Town & Country here is, like, 12 million [unique visitors]. Never before have we seen such an appetite for content broadly. That means we’re on to something, right? Sometimes, you’re quite overwhelmed and you think, “Well I haven’t hit the I haven’t hit the jackpot yet,” and sometimes you’re like, “My day is full of twists and turns that make it super stimulating.”

How do you react when yet another mag title bites the dust?
When brands shutter now, I’m in such a space that I really look at it clinically, and we do that even when brands don’t shutter.

How do you measure quality of readership, not just quantity?
For us now, the idea is and has been for some time: What’s the retention rate? What’s the habit-forming relationship cap with readers? Our editors have been very focused on the amount of people we have every month and also on the content that creates that deeper engagement. So either they’re sent down a rabbit hole, like with [our coverage of] the MTV Video Music Awards, but sometimes, we have a story on Cosmo that went up last month, or even the Woody Harrelson cover story on Esquire, which had, like, nine minutes of reading time as an average. 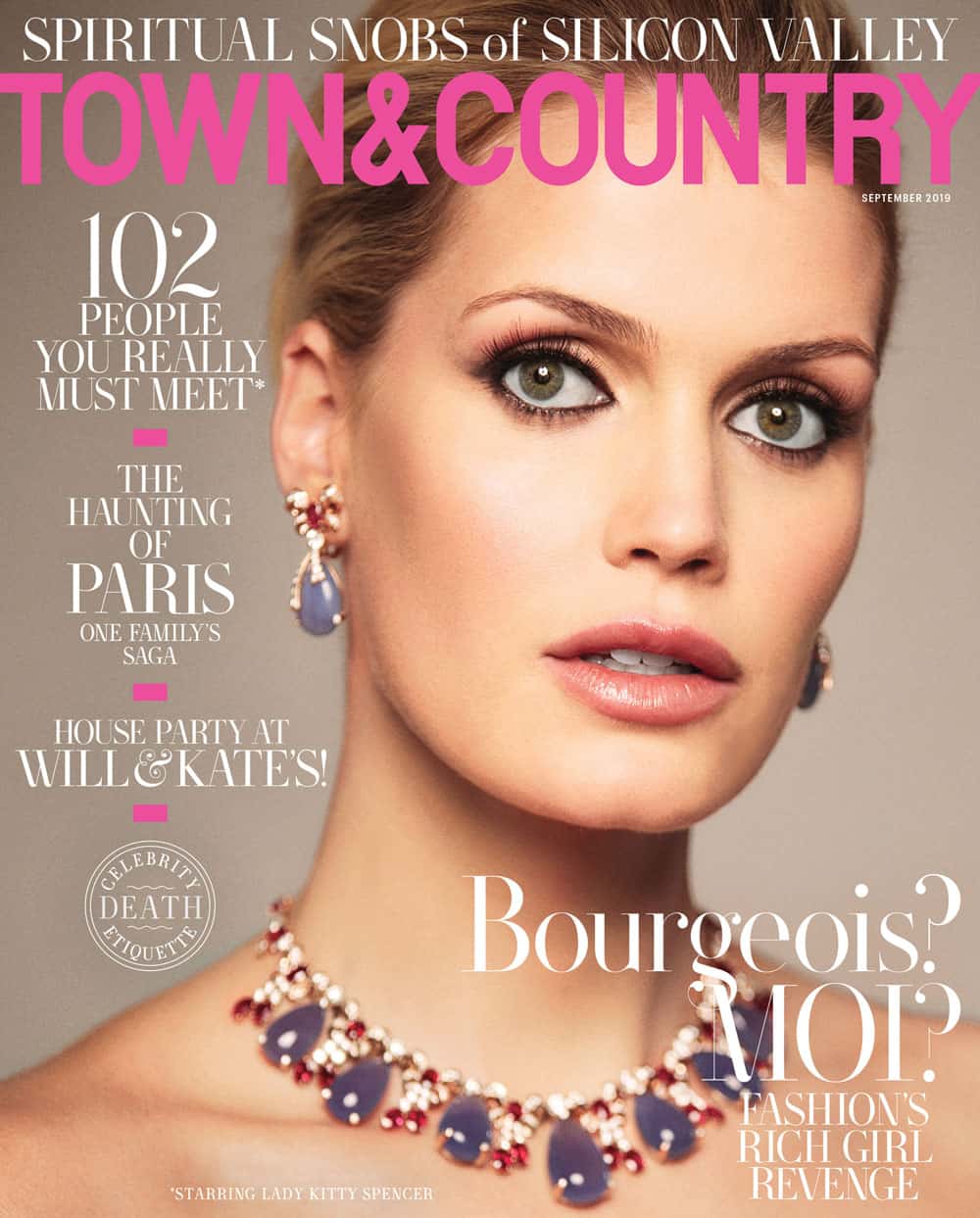 Hearst was a pioneer of syndicated digital content across brands. How has that approach helped traffic, without losing or diluting a publication’s integrity?
If there’s a piece of e-commerce content that’s doing really well on one site, then by all means, clone it and make some money. If something is deeply commoditized, like “Meghan Markle wore this,” having four people write that story is a complete waste of time. If you’re able to pull some of that commoditized content from other brands, it gives you the room to do the deeper things. I think we say now that no more than 20 percent of [a Hearst publication’s] content can be syndicated. If 80 percent of your content is original, it’s still going to feel like you.

But we also lose something when everybody’s covering everything…
I’m with you. I think that there’s a risk. It’s hard to be a generalist brand in digital, especially men’s brands. So much of what defines brands is a sense of brand fidelity that the Internet doesn’t necessarily reward. That is what makes it essential for brands to have daily newsy content of some kind, whatever it is.

What is your management style like?
As you’ve probably gleaned, I am inherently optimistic. I also love a conversation. I’m a listener, and everyone says good management is about listening—I think the piece that has to come with that is also hearing. Many of my best ideas are not my own. They’re from the people that I work with who are constantly thinking about their slice of the pie or the overall picture, or something that isn’t their slice of the pie but just has their mind buzzing. But at the end of the day, someone has to make decisions, and I really like decisiveness. It’s not that my decisions are always the right ones, but there’s so much potential to do a billion things on any given thing you just, at a certain point, have to say, “This is where we’re going.” 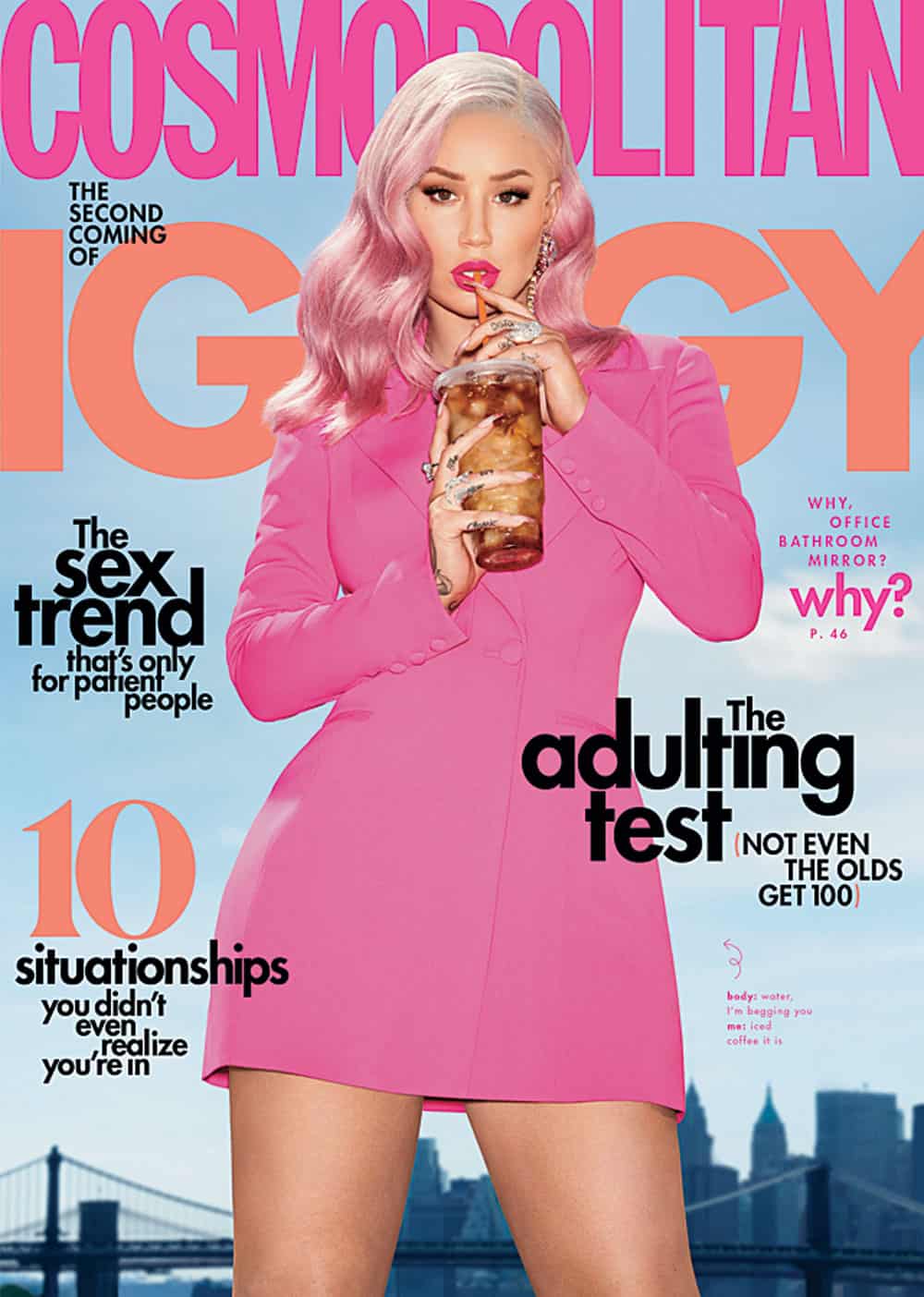 Any advice for less decisive folks in the industry?
There’s a “tiresome trigger.” If a topic is tiresome, you’re done. We’ll talk about things and there comes a moment when the conversation just ceases to be productive for anybody. I’m known for summing up every meeting at the end. I’m like, “Here’s what we said, here’s what we need, and here’s who’s doing that.” I just don’t have time for that s**t. You don’t want to stop conversation when it’s still productive, but I often come into meetings or scenarios where I’m thinking, “What is the outcome I want to get?”, and if we’re not getting there, I end it.

The gig economy and freelancers are an increasingly bigger part of our industry. Thoughts?
My husband is a consultant, so he works on his own clock; I cannot believe how efficient he is. He gets so many things done in way less time than I do. I have an appreciation for that. I think I wouldn’t survive because I would be distracted. I would do the laundry or organize my sock drawer. In media, as a whole, we produce a product that requires a team, so this may be extraordinarily old school of me, but I do still feel like the core group needs to be together in an environment. It would be hard to do this remotely. Before I got this job in this nice, big fancy office, I sat in the pen, eight of us in a little pen and no walls or anything. I miss that, and I think to some degree that has hurt the team. All the editors were smooshed together too. I’m just a sucker for people, so I do miss that contact piece of it.

Are you able to read magazines without it feeling like work?
Yes. I read all our competition. I still consume media like a media lover. The things I absolutely read every day are The New York Times and a newsletter called Media Star. And Instagram, which I wouldn’t call reading; that’s my addiction. Although now I have it screen time locked, so I can spend only half an hour a day.