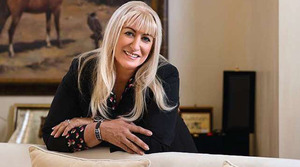 (NEW YORK) Exec updates from the joaillerie crowd: Harry Winston has appointed Nayla Hayek as its new CEO after Frédéric de Narp quietly stepped down from the role in April. Also last month, Harry Winston was acquired by the Swatch Group in March for a cool enterprise value of up to $1 billion. In 2009, de Narp was hired away from Cartier. The brand’s new chief exec is the daughter of Nicolas Hayek. Does that name ring a bell? The elder Hayek is the co-founder and CEO of the Swatch Group, the world’s biggest watchmaking company. His daughter Nayla has served as chairwoman of the Swatch Group since 2010.

While de Narp’s exit was an unsurprising result of the Swatch Group buyout, some have said his showiness was a factor. But don’t cry for de Narp: according to the NY Post, he was rumored to have pocketed $15 million as part of his exit deal. Pas mal, non? As for Hayek, she’s off to the races. (Fun fact: she is a member of the World Arabian Horse Organization and is an international Arabian horse judge). But we imagine there will be no horsing around in this new role.