Hanging Out With Betsey Johnson…Inside A Macy's Window 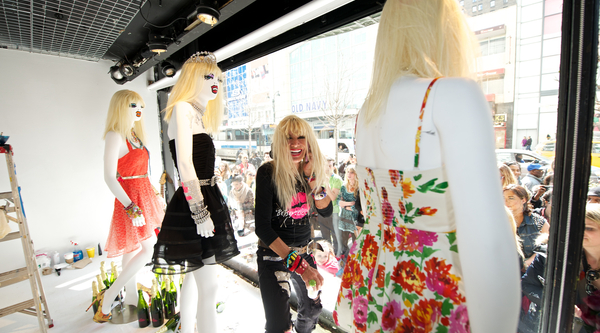 (NEW YORK) For a few hours yesterday afternoon, Betsey Johnson took up residency in a window display of Macy’s Herald Square. The shock factor, considering Johnson’s track record of kooky antics, is fairly low, but the throngs of Betsey fanatics clustered outside the 34th Street window can attest to how riveting it is to watch le Betsey in action as she decked out mannequins in frocks from her eponymous frock line. Especially when there’s paint splashed everywhere, (empty!) champagne bottles strewn on the floor, and the designer’s adorable granddaughter making a cameo. Aww alert! Paying close attention? Good, because you‘ll need to in order to follow Betsey’s delightfully scattered trains of thought. She was busy painting when the Daily dropped by (literally, inside the Macy’s window) after all…

Have you had any visitors in the window?
My granddaughter Ella was here! She was in the window for half an hour, scribbling in lipstick. It was hysterical. She had a great time, though she was very shy in the beginning. [leans back on ladder to reassess what she’s been painting] Oh, look how I’ve f*cked up the word champagne! I can’t make that [letter ‘O’] into an N! [Macy’s visual display staffers cheer her on: “Yay! You can do it! Now paint an E…”]

Is this your first time in a window?
Nooooope! I’ve been in Macy’s windows in the eighties. I was in three windows for three days, painting murals. Oh, no! It’s dripping too much! Tomorrow, I’m going on the road to Florida to do an appearance, and that’s different. Being in the window feels more personal; at an appearance, you rattle through it so fast. It’s like, “Sit and take a picture! Sit and take another picture! Hi, bye! Hi, bye!”

Did you consider doing one of your signature cartwheels in the window?
Oh, my God. That was not even a thought! No, no, no. Cartwheels are a superstitious thing…[trails off, peering a little wistfully across 34th Street, dripping paintbrush in hand] There was a huge accident across the street. We heard it in the window! We thought it was a bomb or something! I love the number 13, and today is the 13th, but now I’m not so sure…
Sounds scary! Have you ever experienced a miracle on 34th Street?
It’s kind of a miracle that I was in Macy’s way back then doing windows, and it’s happening again now.

Have you tried to get into a window often since you did so over two decades ago?
No; Macy’s just really got behind the collection. A few years ago, I really wanted to do three windows, including one as a retrospective, so the germ of an idea has been there.

Has there been any champagne involved in today’s window dressing?
Oh, yeah! Look, there are bottles on the floor, surrounding one of the mannequins.

Do you window shop much?
I’m a big window shopper. I like to do my fashion research…

How’s the reality show going?
Oh, I don’t know! I’m sure you’re as excited as me. It’s been amazing to do over the past year. We don’t see any footage, though. As they’re filming, you kind of get the idea that they’re filming, but you can’t help but forget after a while. There’s a lot of real stuff, and a lot of not-real stuff. [Gets distracted by her paint job once again] I’m trying to write “rock ‘n roll,’ and I can’t even spell that right! Is there is hyphen around the ‘n’s? I don’t even know.

Seems like it’s particularly tricky to spell whilst painting…
I drew all over the mirrors and the walls of The Plaza once, and I went back the next day and realized I’d misspelled a lot of stuff. It was beautiful!

Betsey Johnson on Her Trolls Collaboration and...

What Was Your Best Summer Ever? Volume...