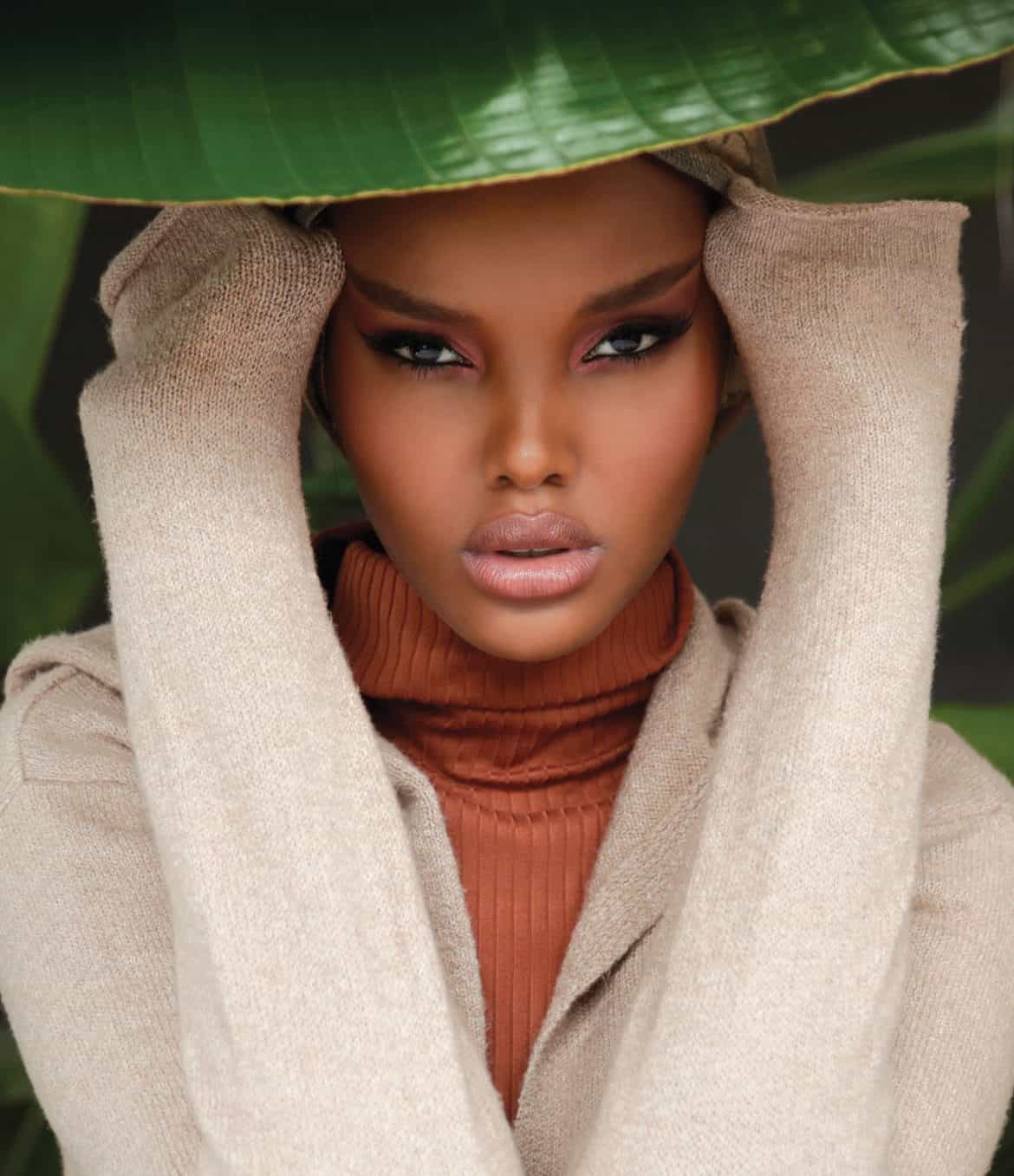 Halima Aden went from leaving a refugee camp in Kenya for America to become homecoming queen and Miss Minnesota, then swiftly captured the attention of Carine Roitfeld. Now a fashion darling, the 21-year-old credits her mother, childhood teachers, and Ashley Graham with changing her life. Prepare to fall in love! 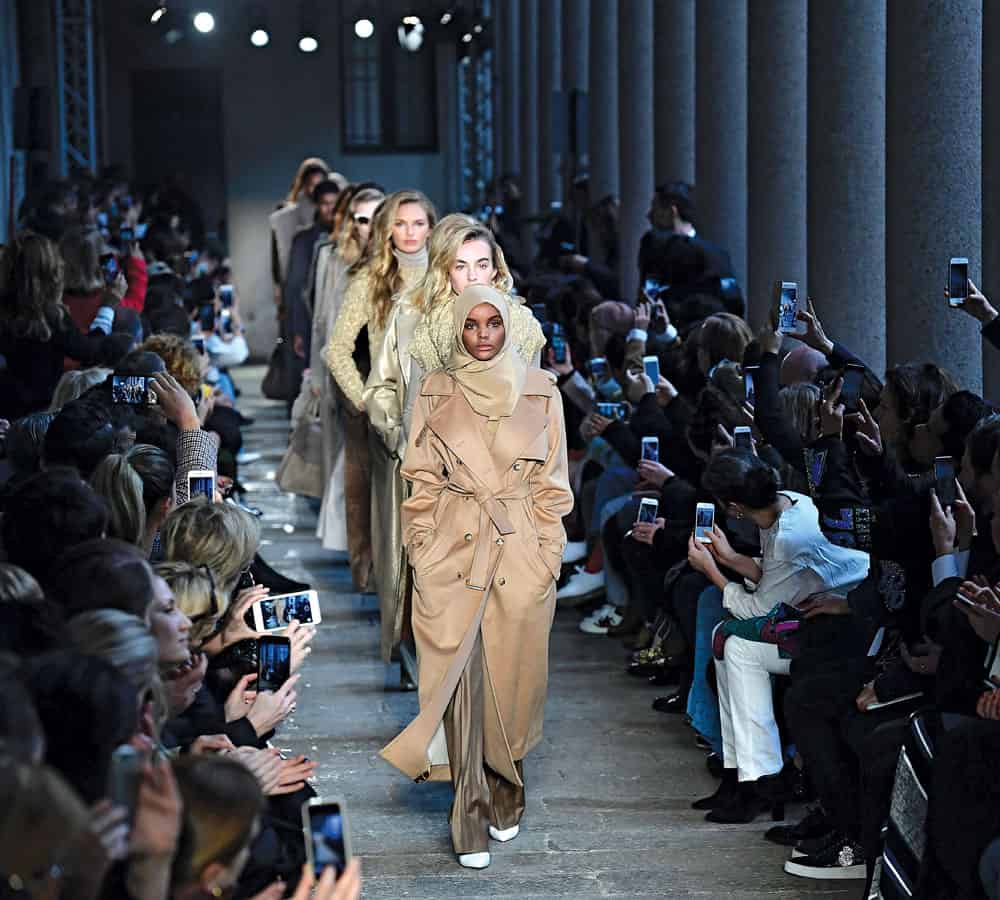 You left Kenya at age 6. What do you remember from that time?
I remember so much. I remember my childhood friends and the camp I was born in. Despite the circumstances of being a child refugee, it was still a beautiful and hopeful childhood. Growing up, I thought we were wealthy, in our way, because we moved around the camp so much. If it rained one day and our house was slumped [down], everything was no problem and nonchalant. My mom would just be like, “Okay!” and our neighbors would get together and build a new house. I remember a lot of happy moments like that. I also remember more challenging, difficult moments, like not having access to food and not having a good education system in the camp. I was young, so I didn’t understand anything about refugees or legal status. I could tell my mom was stressed because our future was in limbo, but she would always force me to have hope and not see ourselves as victims. Despite what life throws at you, you are so much more than your circumstances. 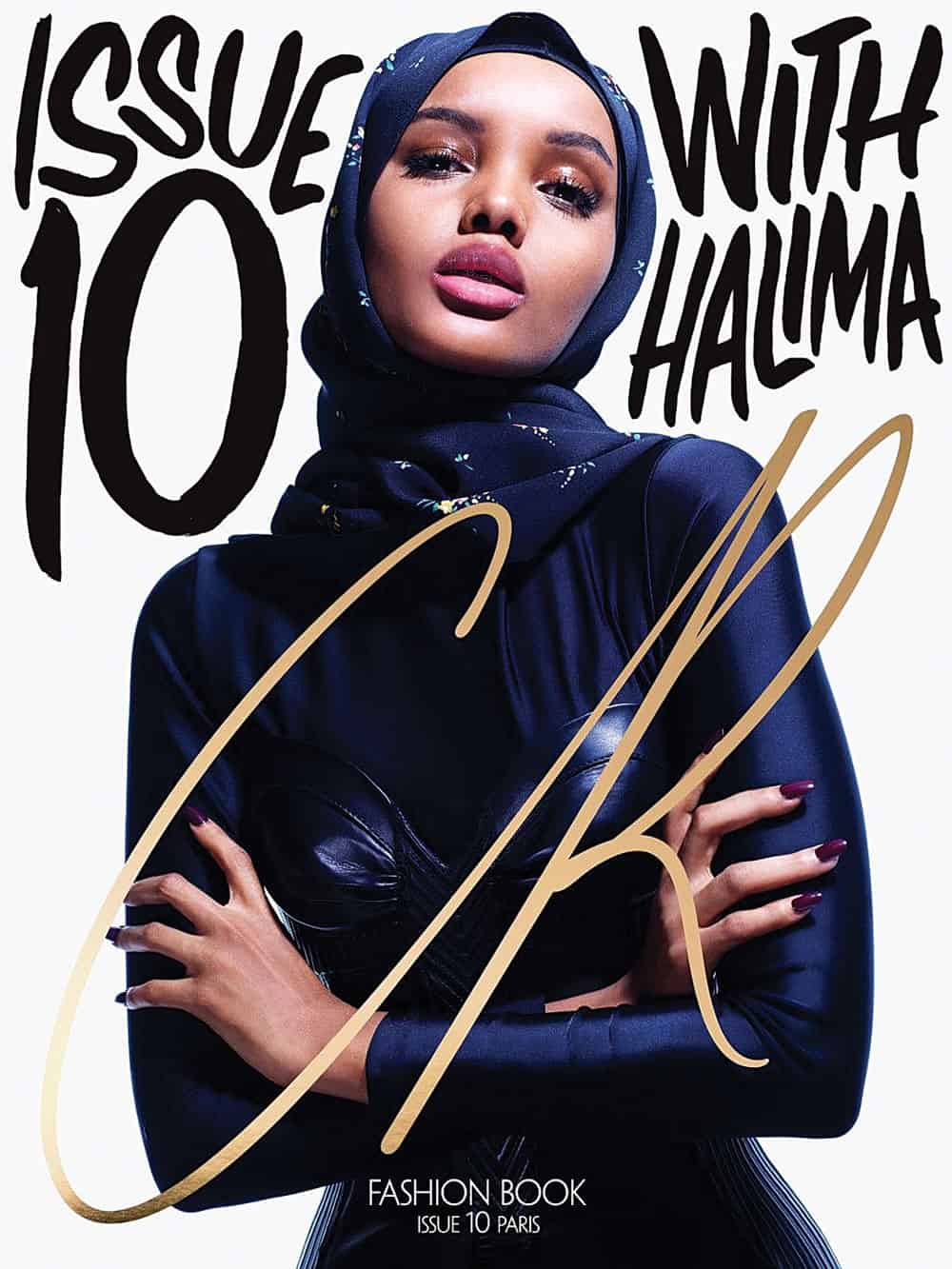 What was it like when your family moved to America?
When we left all that behind and moved to America, we didn’t have a say where we would live—it’s actually one of the biggest misconceptions [about refugees]. You don’t get a say in where you’re going. It’s so random and determined for you. We ended up in Missouri. When we landed in the States, in a lot of ways, the struggle had just begun, believe it or not. We left behind an area we could navigate, a world we were familiar with. I grew up in the camp—it was all I’d ever known. I didn’t know what we were missing. I was content. To leave that behind and move to Missouri was hard. That was the first time I ever heard gunshots at night. We were placed in a poor, violent neighborhood. The school I went to didn’t have an ESL program, so every day I’d sit and not learn anything. I thought that was normal. My mom escaped the Somali Civil War, walked 12 miles on foot, raised my brother and me in a camp. Then we won the million-dollar lottery to come to America; she wasn’t going to let us miss an opportunity.

Your family moved to Minnesota soon after…
People there did so much for my family. I’m so grateful. Immediately I met teachers who would study with me after school. My mom came to school every day, and even though she didn’t speak English, she wanted the teachers to know she was present and believed in us. My teacher saw that if they sent us home with homework, nobody could help us. They took it upon themselves to be the second parents. I could go on and on about Minnesota and what it’s done for my family. I’m never moving. People always ask why I haven’t relocated to a fashion capital. I’m so loyal to the state that gave my family so much. I refuse to let go of it. 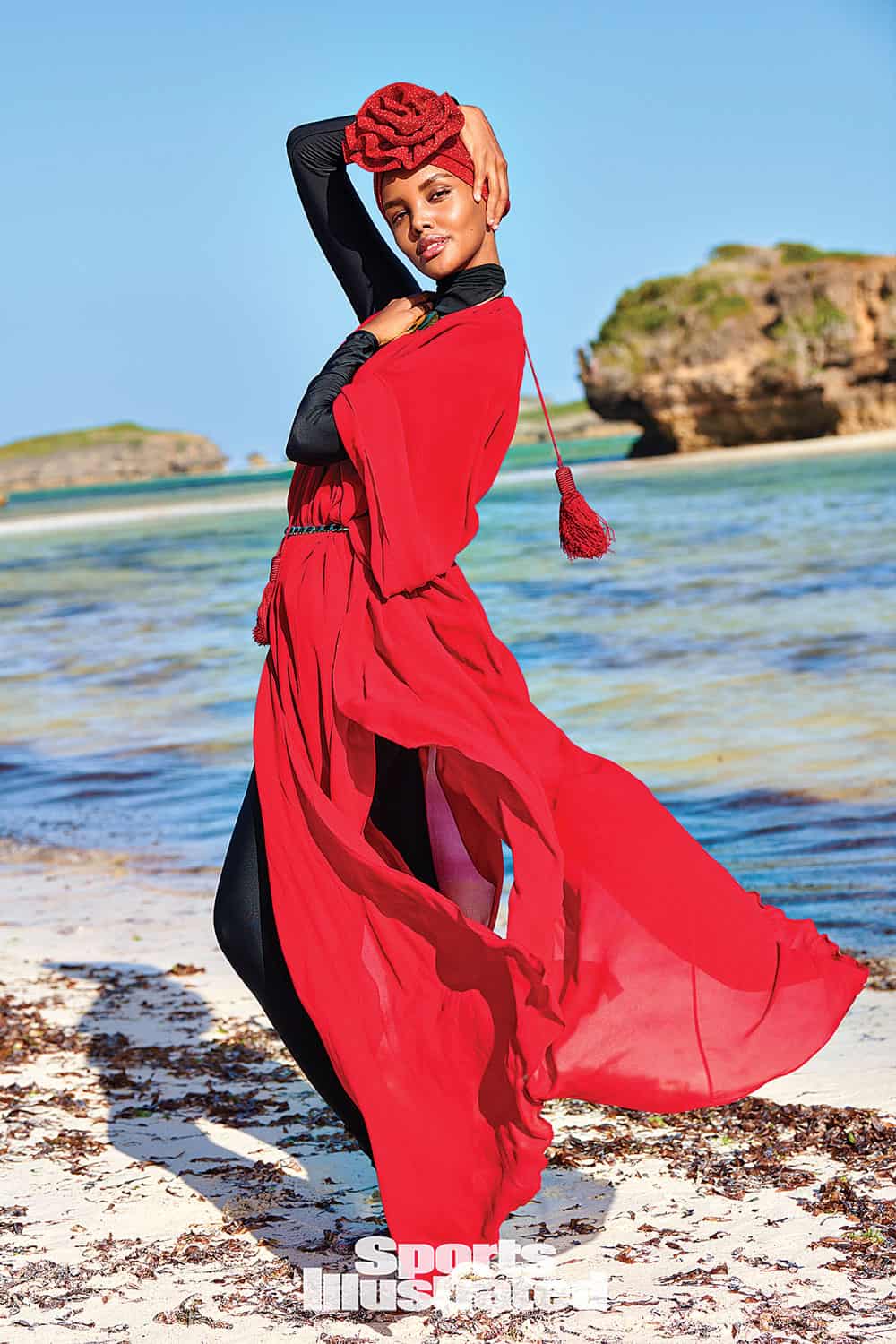 You were homecoming queen in high school.
I think if you’re open to people, people will remember you for how you made them feel. A lot of people were drawn to me as the only black person who was nominated, and I was wearing the hijab! I think the entire school was kind of pumped to make it happen, because it had never happened in our school history.

That’s awesome!
I realized with homecoming that I could still do things like everyone else, but it looks different because of who I am, and there’s nothing wrong with that. That mentality led me into college. I was the Muslim Hijabi student senator. That representation led me into having the guts to enter pageantry. Pageantry is not in Somali culture. It’s not a Muslim tradition, but it’s definitely big in Minnesota. I wanted to participate. My life literally changed the next day after being in the Miss Minnesota pageant. There was so much attention because it was the first time the Miss Universe [Organization] allowed a woman to wear a burkini. I was just as confident and beautiful, and had the same experiences as the other girls on-stage, but I looked a bit different. Carine Roitfeld called the next day. 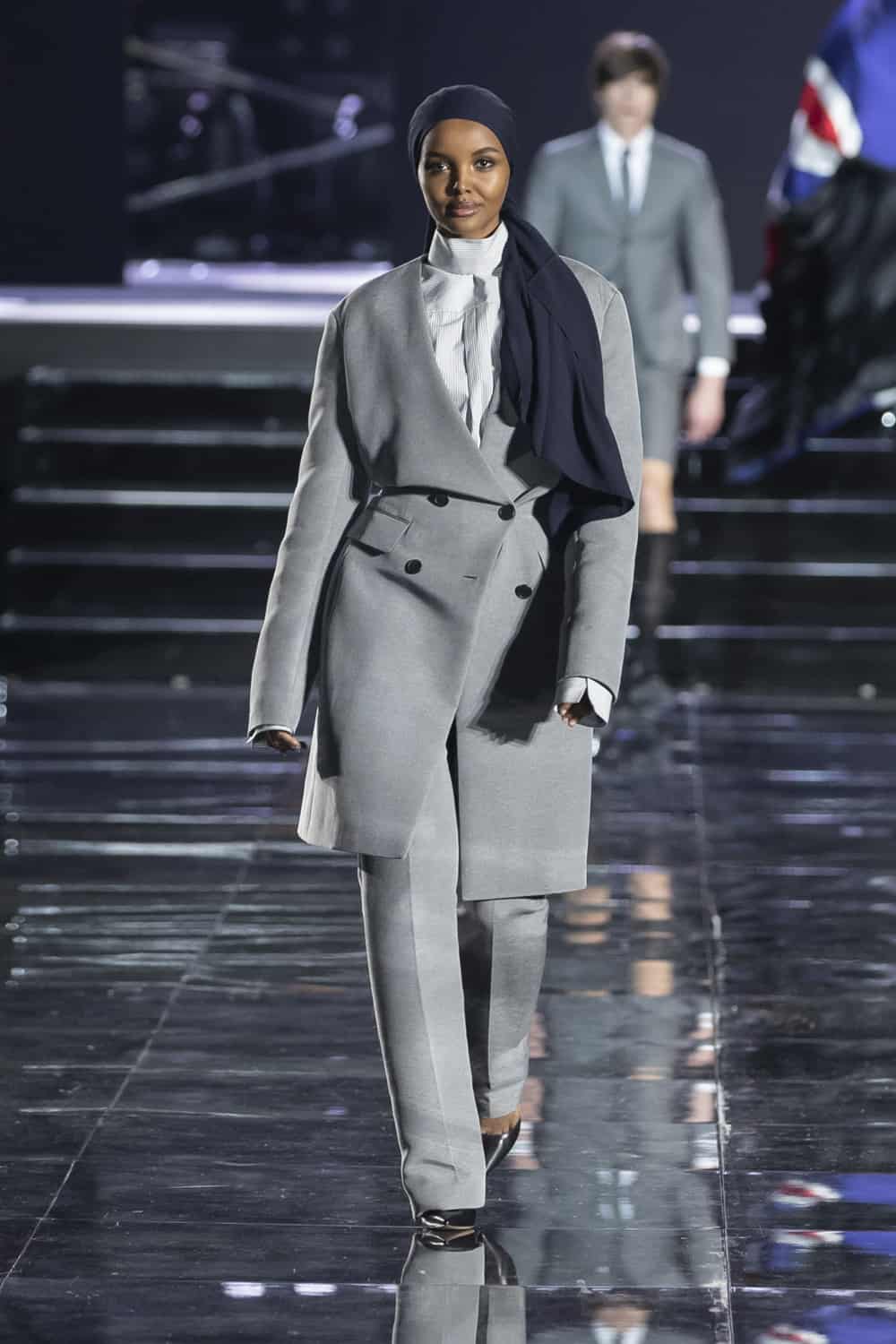 What was that like?
In 24 hours, it was zero to 100. The thing is, I always kept my housekeeping job due to my refugee background. It was critical to me that I was a hard worker. At one point in high school, I worked three jobs—two full-time jobs, one doing housekeeping and another doing PCA [Patient Care Assistance]. Even seven months after modeling, I still kept my housekeeping job. People didn’t believe me. I came from Milan Fashion Week, and the next day I clocked in at St. Cloud Hospital.

What do housekeeping and fashion have in common?
You need a lot of patience. I’m kidding. Housekeeping was structured: 3:30 p.m. you clock in, 11 p.m. you clock out. Modeling is spontaneous. You meet so many people every single day in housekeeping, and gain a new understanding of life. You see people at their most vulnerable, like the elderly, or when a patient passes. It reminds you that life goes in a blink. It was always a constant motivator. 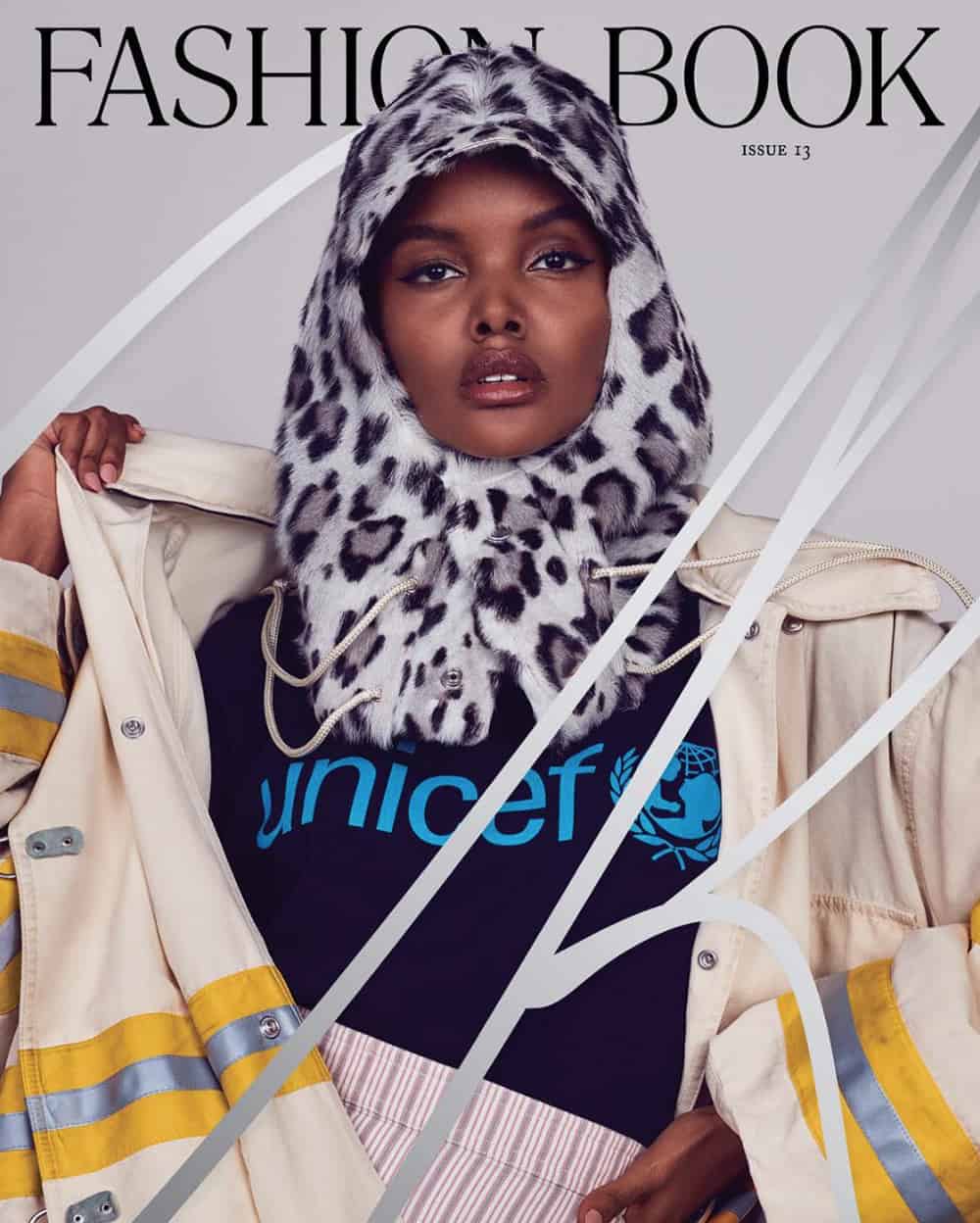 What happened when Carine tapped you for CR?
I googled her! I didn’t know anything about fashion. Before my first shoot, I watched America’s Next Top Model, so I was fully prepared for a snake to be draped around my shoulders. I didn’t know who Mario Sorrenti was, so I wasn’t nervous. It wasn’t stressful because I wasn’t trying to impress anyone. Afterward, I found out he’s one of the big photographers. I had no idea I would end up on the cover! I was supposed to be on a page inside, and it turned into the cover. It was hard for me because my mom didn’t understand.

Does she understand now what you do?
A little bit better. She doesn’t get the concept. She doesn’t get that a lot of days [on set] are 14 hours. The combination of fashion and activism is what’s big for her. I come home with a cover and she reminds me to wash the dishes! When I brought home [a copy of] CR Fashion Book, where I wore a UNICEF shirt and the full story was dedicated to the work UNICEF is doing, she was so proud. She wanted to hang up the story. She brought it to neighbors! She loves the fact that I’m not just modeling but am really trying to use this platform to speak about UNICEF. I was a UNICEF baby in the camp. Sometimes it doesn’t connect for people that not only do I love the organization, but it’s so deeply personal for me. 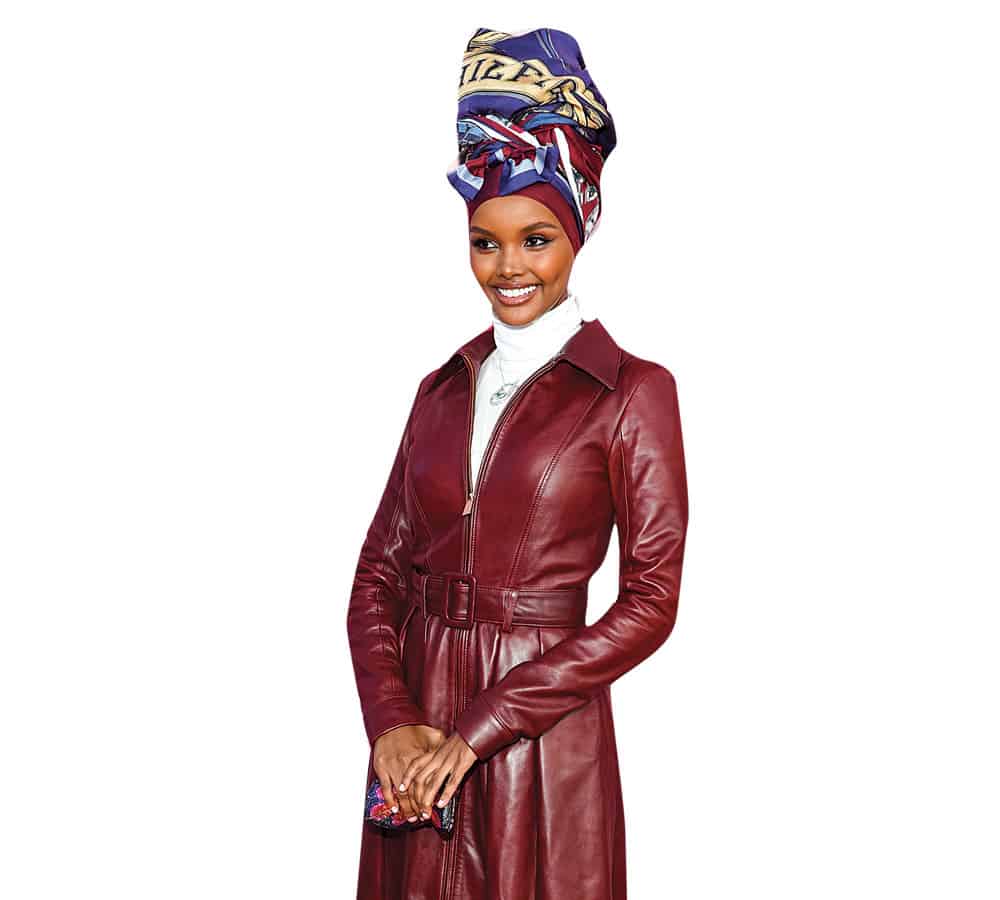 What was it like returning to your camp?
It was probably one of the craziest trips. I was going back home for the first time, so that was a whirlwind of emotions—good, bad, excitement, sadness. There are still workers in the camp who knew me and my family. I was also preparing for my first-ever TED Talk, which was happening for the first time ever in a refugee camp. I thought it was no big deal, but it kind of was a big deal.

Tell us more about your UNICEF ambassador role.
For a lot of people it’s hard to see beyond the scars and pain. I want to show what happens when we invest and believe in our children; when we give them help and nurture their needs. I want there to be millions and millions of Halimas. I got to become successful. That’s ultimately what I want for every single refugee child. I want them to never lose hope.

How are you so confident and wise at 21?
It’s funny you say that, because I’m so nervous. I speak from the heart. I never prepare my speeches. It comes out naturally. I think if you’re speaking from the heart, it will resonate. You have to share your story. We all have something to say, and it needs to be heard.

Who’s your role model?
My mom. She’s an incredible woman, but she’s also a big pain. She is my biggest critic, only because she believes in me. She always pushes me to be better. It’s not the material stuff; I think that’s in part due to the life she lived. Money and success aren’t important. How you make people feel and the lasting impression and mark you leave on people is what matters. 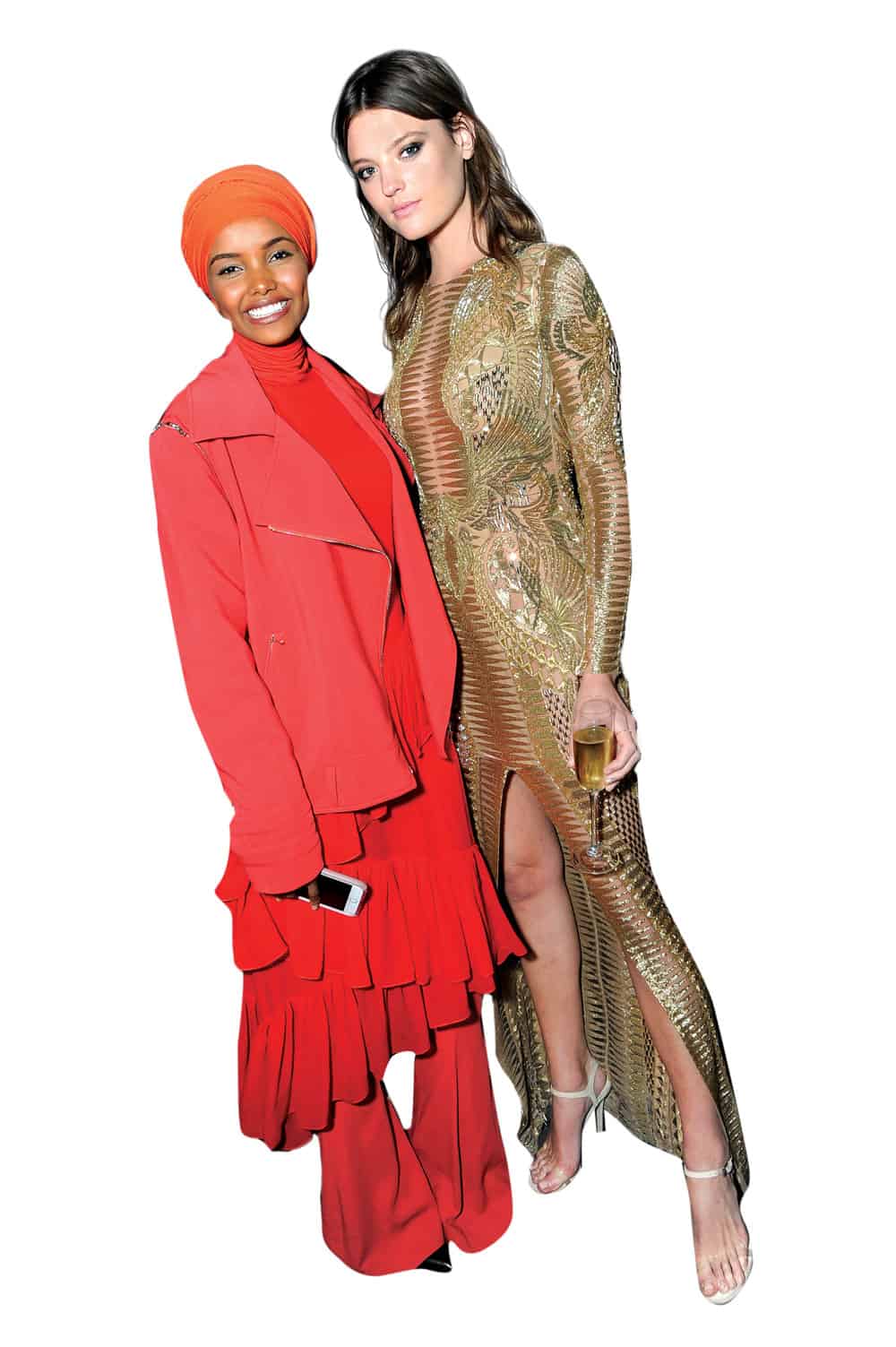 In the industry, are there any models you look up to?
Ashley Graham. She’s a big role model, mentor, and friend. She’s using her platform not just to be a model and fashion icon; she’s also a businesswoman. She’s thinking about ways to make women not only feel accepted but beautiful in their own skin. She walks the walk and talks the talk. I want to be somebody like her, using my platform to make people feel empowered.

You prefer to work with women. Why?
There’s something so powerful about sisterhood. Just inviting every woman from every walk of life to the table. I always tell girls, “If you don’t see yourself represented in any given space, don’t wait for the invite, pull up a seat.” It was important to me that everybody on my team was women. Not just Muslim women. Women from all different backgrounds; powerful women!

What do you hope to do beyond modeling?
I definitely want to continue doing more field visits and more collaborations with brands who are giving back. Fashion is fun, don’t get me wrong.… I love getting my nails and makeup done, but it’s so much more fulfilling to see the work being done in the camp. Especially now that the refugee migration topic is so relevant to us. I want to go back to my camp one day and see changes happen. I’ll do whatever I can do.

All the Highlights From Inside the 2019 Fashion Media Awards