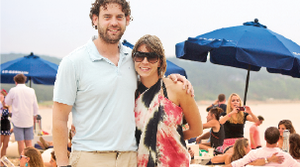 What’s it like going for midday lunches at downtown perma-celeb hautespot Da Silvano…while you’re in elementary school? Just ask Leyla Marchetto, whose dad is Silvano Marchetto. She’s clearly inherited his resto-running genes: just check out Montauk’s Navy Beach, which Marchetto runs with her husband, Franklin Ferguson. All in the fam!

What was it like growing up as Silvano Marchetto’s daughter?
I had first grade class lunches at Da Silvano. I also waited up past midnight on a schoolnight when I was four or five to have Tina Turner and Tom Cruise sign my autograph book. And I roller-skated inside the restaurant knocking over glasses and a bottle on Cyndi Lauper’s table. Oh, and Gianni Versace once signed a napkin for me!

Might Da Silvano head East?
It’s been discussed! Six or seven years ago we looked at a Southampton location, but decided against it. Two years ago I saw a space in Bridgehampton. But now that we have a great team on the East End, you never know what might happen…

How did you meet your husband and business partner, Franklin Ferguson?
We were introduced in Manhattan through a close mutual friend. Franklin had just moved to NYC from L.A. and Vegas, working with China Grill Management and SushiSamba. We just clicked!

How did Navy Beach come about?
In 2009 Franklin was itching to leave SushiSamba and open his own project. We went to dinner at Minetta Tavern with Frank and Kristina Davis. They were interested in opening a restaurant as well.

What happened next?
We visited a potential project location, in Montauk. The prospect of living near and working at the beach didn’t sound too bad! Then, Franklin’s friend and SushiSamba alum Martin Cabrera pulled up on his motorcycle; he’d heard through the grapevine that Franklin was working on a new restaurant and offered to help for the afternoon. He never left!

Are there any dishes on the Navy Beach menu inspired by your father?
This season I suggested doing something like my dad’s Linguine alle Vongole; we ended up with Bucatini alle Vongole with casino breadcrumbs. It’s been really popular. Also, we’ve eaten Burrata at Da Silvano for years. We finally added it to our menu this season. Our version is served over prosciutto with heirloom tomatoes and crispy basil.

It’s quite the tucked-away spot! Do people get lost often?
At least three times a week someone at the host stand explains directions over the phone. Many GPS don’t even accurately describe how to get here, so that doesn’t help. But, isn’t the journey part of the destination experience!?

Nordstrom Expands Its Offering Of Topshop And Topman Duds