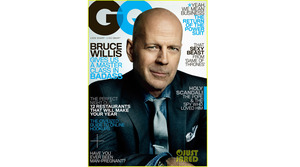 (NEW YORK) Today GQ revealed the menswear designers selected for their annual Best New Menswear Designers In America awards. Who made the cut? L.A. designer Paige Mycoskie‘s laid-back après-surf brand Aviator Nation, Kansas City-based Matt Baldwin‘s denim line Baldwin, which recently expanded to t-shirts and chinos, made-in-America traditional work wear brand Ernest Alexander from New York designer Ernest Alexander Sabine and Bespoken from Liam and Sam Fayed, a Savile Row inspired collection of dress shirts and unstructured jackets from the sons of Ali Al-Fayed, CEO of the legendary suiting brand Turnbull & Asser. For the second year, GQ has partnered with Gap to bring these designers’ duds to the masses through a special limited-edition collab. The clothes will hit Gap stores around the globe in the Fall and will be featured in the October issue of GQ. And for the ladies? Take note that Mycockie’s Aviator Nation also does womenswear for any beach bound babes.
PAIGE REDDINGER