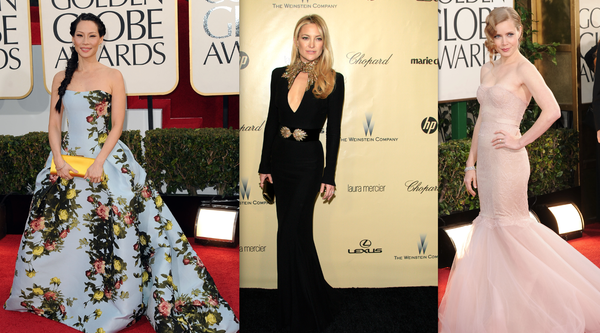 (NEW YORK) The 70th annual Golden Globes was a particularly boozy one, with some actors forgetting exactly what award they were presenting (ahem, Salma Hayek) and others butchering the name of the designer they were wearing (Kevin Dior, anyone?). But amidst the mayhem, many of the celebrities wowed in their designer duds, and of course, others didn’t quite hit the mark. Hosts Tina Fey and Amy Poehler were dead-on with their comedy, and seemed to choose comfort on the red carpert—Poehler in a Stella McCartney black tuxedo number with cropped pants and Fey in a calf-length L’Wren Scott strapless dress with black lace. Then there was comedienne Lena Dunham, dressed in an eggplant off-the-shoulder Zac Posen gown, whose labored trek to the stage was a tad awkward. As Dunham candidly put it, “My stylist keeps telling me to pull the dress down and then shove it to the left. For some reason my breasts have a tendency to sort of shove my dress to the right and I have to fight it back to the left.” Got it, Lena!

As it turned out, neutrals reigned supreme on the carpet with degrees of noir, white, and nude leading the pack. Cue Megan Fox in Dolce & Gabbana, Hayden Panettiere in Roberto Cavalli, Amanda Seyfried in Givenchy Haute Couture, Lea Michelle in a white, leggy number by Elie Saab, and Amy Adams in Marchesa. Anne Hathaway also opted for white (yet again!) in a strapless, sequined gown by Chanel. J’adoring! As for the dames who dared to flaunt their true colors? Top honors went to Claire Danes in red velvet Atelier Versace, Halle Berry in another (revealing) Atelier Versace, Marion Cotillard in an asymmetrical, orange-red velvet dress from Christian Dior, and Jennifer Garner in a burgundy sequined strapless dress by Vivienne Westwood Couture.

Other designers with major red carpet victories last night were Miu Miu with an eye-catching blush sequin dress on a flawless Kerry Washington, Jessica Chastain in an ethereal sea foam Calvin Klein Collection dress, Julianne Moore in a custom dress from her bestie Tom Ford, and Nicole Kidman and Kate Hudson in black and gold dresses from Alexander McQueen.

And finally, it wouldn’t be the tapis rouge without a little skin-bearing drame. Julianna Margulies wowed in a black Emilio Pucci, while J.Lo wore a figure-hugging Zuhair Murad dress that showed off all of her favorite assets, rather unsurprisingly.

Gucci, Michael Kors, Salvatore Ferragamo, Giorgio Armani, Naeem Kahn: all of the usual suspects were there. Missing from the parade were the likes of Narciso Rodriguez and Bottega Veneta. But where were the up-and-comers? Jason Wu, please stand up!
PAIGE REDDINGER

Where The Boys Are