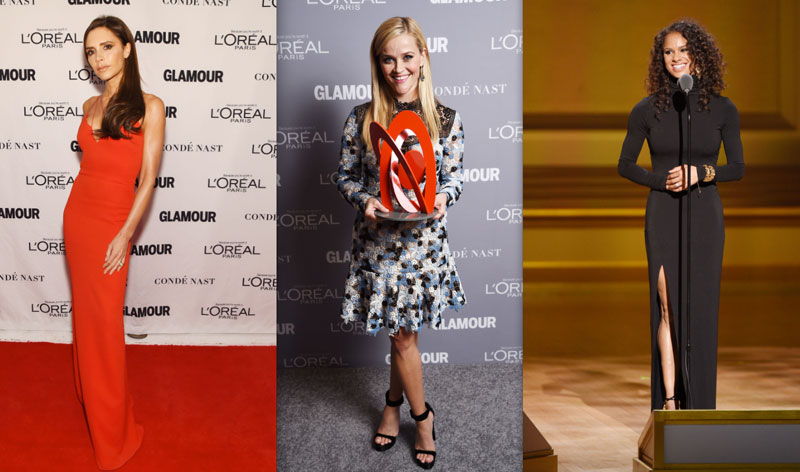 It was a packed house at Carnegie Hall last eve as hundreds joined Glamour for its 25th Women of the Year Awards (that’s WOTY, to insiders), and like years before, the event was equal parts inspiration and emotion. Editrix Cindi Leive kicked off the night with memories of her first time attending WOTY, as an assistant’s assistant—the evening did not end in jello shots with Madonna at Danceteria as she had hoped—before she drove a few points home: “Yes Congress is stuck at just 19 percent female—I think the technical term is a ‘sausage fest.’ No, Hollywood doesn’t think it’s a problem to pay Katniss Everdeen less than the dude from the hangover. But the world only spins forward…the women we honor tonight are helping us along.”

The evening wasn’t without some serious entertainment: Jennifer Hudson took to the stage for a hair-raising performance, and Amy Schumer, for the second year, made the audience cry with laughter. “I poke fun at women’s magazines a lot because it’s easy and it’s fun, and they write hostile articles like, ‘How to trick your stomach into thinking you ate that week!’ But Glamour is one of the good ones. Fighting the good fight, putting true leaders and badass bitches at the forefront of their pages.” Ellie Goulding sang her hit “Anything Could Happen,” before introducing Sophia Bush, who was there in support of The Girl Project, an initiative created by Glamour (Michelle Obama recently got behind the movement, and sat on a panel at the Apollo earlier this fall).

And then, the winners: Misty Copeland, Cecile Richards, Victoria Beckham, Caitlyn Jenner, the women of Charleston Strong, Elizabeth Holmes, the U.S. Women’s soccer team, and Reese Witherspoon. Each woman, from a different background and making changes in  different community, commanded the stage with unique words of wisdom.  Without further ado, the most quotable moments of the evening…

Lupita Nyong’o presents “The Showstopper” to Misty Copeland
“I have to say that ballet is one of a kind in that the woman is essential—without the prima, there is no ballet. And without my mentors, there is no Misty,” Copeland said.

Eve Hewson, Elisabeth Moss, and Uzo Aduba present “The Health Advocate” to Cecile Richards, president of Planned Parenthood
“No mother in this world wants her daughter to have fewer rights than she did,” Richard said. “I want to thank my own mother, the former governor of Texas. She received this exact same award here 24 years ago. I just want to say thanks to all the mothers who encourage their daughters to do whatever it is they want to do.”

Carolyn Murphy and Brooklyn Beckham present “The Fashion Force” to Victoria Beckham
“I love what I do, and I feel blessed to have been given the chance to pursue my career ambitions,” Beckham said. “It started with the Spice Girls and girl power…[pauses to wink and throw up the signature Spice Girls peace sign]…and now I am channeling that same message to women through my collections. I want to support, empower and really make women feel like the best version of themselves.”

Judith Light presents “The Transgender Champion” to Caitlyn Jenner
“Let me first say, getting up those stairs in this dress is more difficult than hurdling,” Jenner said. “My transition was long…It started with Diane Sawyer, and then the pictures came out. Boy oh boy did the conversation change. No one in the media was saying terrible things because it would be homophobic. All of a sudden these new questions came into my life. People were wondering, What’s your style? What are you going to wear? Who are you heroes? Are you a feminist?”

“Finally, last week, I got my driver’s license!” she continued. “Picture and gender marker F. So it’s always the little things in life you notice…I never in a million years thought I would be here, and I’m sure you didn’t either.”

Viola Davis presents “The Peacemakers” to the women of Charleston Strong
The group of women took the stage to a standing audience with glossy eyes. “Racism is taught,” said Felecia Sanders, who lost her son Tywanza. “Learn to respect each other in spite of the color of our skin. We need to love, not hate. It is love that binds us all, and hate that divides us all.”

Jared Leto presents “The Entrepreneur” to Elizabeth Holmes
Leto, with Glamour-pink hair and man bun intact, welcomed Holmes to the stage, who he considers “the only person who makes me feel like a lazy bastard.”

“I’ve been so inspired in my life by this concept that this generation of women could change Madeleine Albright’s quote, ‘There’s a special place in hell for women who don’t help other women,'” Holmes said, as Albright watched from the audience. To the girls in the balcony invited as part of The Girl Project and Girls Inc.,she said, “Be the best in science, in math, in engineering. Go all into it, and build this stereotype that we can be the best in the fields. Because as we change that, we will change the number of female founders, CEOs, glass-ceiling breakers and world changers.”

Seth Meyers presents “The Game Changers” to Team U.S.A.
“Inspiration is probably the greatest gift women can give other women,” coach Jill Ellis said. “If something we did over this summer somehow pushed some girl in the rafters to believe in herself, to push herself to achieve, then certainly I think our legacy becomes more powerful than just winning this award.”

Goldie Hawn presents “The Hollywood Hero” to Reese Witherspoon
On when she started asking studio heads about plans for female leads, Witherspoon recalled the blanks stares. “No one wanted to answer the question because the fact was the studios weren’t developing anything starring women.” Today, she added, girls are forced to watch “talented accomplished women saran-wrapped into tight leather pants, tottering along in very cute but completely impractical shoes, turn to a man and ask breathlessly, ‘What do we do now?’ Do you know any woman in any crisis situation who has absolutely no idea what to do? I mean, they tell little children in crisis that if you’re in trouble, talk to a woman.”

“Films with women at the center are not a public service project,” she continued. “They are a big time, bottom-line enhancing money-making commodity.”

Gigi Hadid: On That Italian Vogue Cover with Steven Meisel