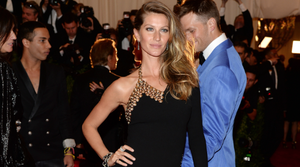 (NEW YORK) Forbes released their list of the world’s highest paid supermodels and it’ll probably come as no surprise that Gisele Bündchen came at the top of the list. It is, after all, her seventh consecutive year snagging the number one spot. However, Bündchen’s net worth dropped about $3 million this year, but don’t cry for the Brazilian beauty. With earnings at $42 million, that’s seven times as much as second place holder, Miranda Kerr (netting $7.2 million in earnings) and is $3.7 million more than her husband, Tom Brady.

Bündchen can thank much of her big fortune not only to her good genes, but also to her partnership with Brazilian footwear company, Grendane, the shares for which doubled in 2012. She also earns millions from her eco-friendly cosmetics line Sejaa and international campaign contracts with Pantene, Oral-B, and Sky HD-TV.

New to the list this year are Joan Smalls and Liu Wen. Smalls comes in at number eight on the list with $3.5 million and is the first Latina ambassador for Estée Lauder, while Wen comes in at number five at $4.3 million and is the first Chinese model ever to walk the Victoria’s Secret fashion show. And how about Kate Moss? The ultra-famous waif, who made her name in the ’90s, still holds a top spot at number four at $5.7 million. Not bad for the 39-year-old supermodel, whose good looks are still landing her big campaigns for the likes of Stuart Weitzman and Versace, amongst others. Not to mention, Moss will be posing for Playboy for her upcoming 40th birthday. If that’s not a way to celebrate four decades of hotness, we don’t what is! Check out the full list here.

From The Daily Stylist: All In Theory