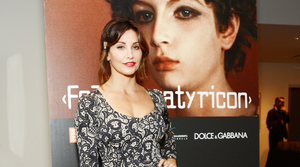 In perhaps the greatest news of all time…Gina Gershon has been cast as Donatella Versace in a LIFETIME MOVIE!!!! (We are dying!) The Showgirls actress will star in House of Versace based on Deborah Ball‘s nonfiction book about the Versace family who have had their fair share of ups and downs. And for the second greatest news of all time...Raquel Welch will portray Donatella’s Aunt Lucia. Gianni will be played by Veronica Mars actor Enrico Colantoni, which isn’t as campy, but we can’t have everything. The movie is set to air on October 5th on (we need to repeat this) Lifetime!