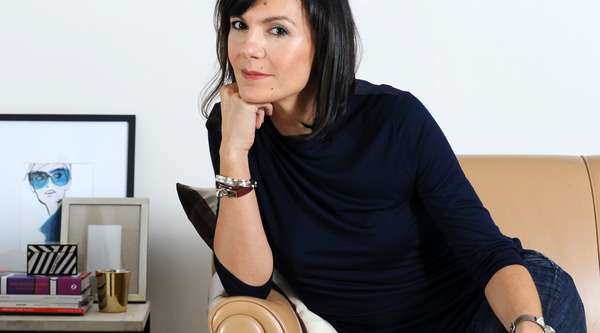 (NEW YORK) Since landing the land of  brown and white striped everything in July, Henri Bendel’s creative director, Pina Ferlisi, has been hard at work devising original accessories collection for the former department store turned specialty boutique. Ferlisi’s an alum of Marc by Marc, McQ, Gap, Coach, and Perry Ellis, so she’s seen it all across the high-low gamut. We chatted up Ferlisi as she recently unveiled Bendel’s Fall goodies: rife with plenty in the bauble department, including lots of stackable wrist sparklers, plus a spate of interesting handbags befitting of Ferlisi’s extensive accessories design experience.
BY ALEXANDRA ILYASHOV

What’s your pre-Bendel backstory?
Before Henri Bendel, I was at Alexander McQueen—I was creative director for McQ, overseeing the entire brand, ready-to-wear, and accessories. I launched handbags, shoes, and jewelry for them.

Your industry experience started way before McQ, right?
Before that I was executive vice president of design at Coach, overseeing pretty much the entire brand except for men’s. Before that, I held the same position at Gap, which was great because it’s such an iconic brand.

What’s your Marc Jacobs connection?
I launched the accessories line of Marc by Marc Jacobs. My first job was at Perry Ellis—I worked with Marc there on the grunge collection with him. He’s so great. When Marc got the job at Louis Vuitton, moved to Paris, and started Marc by Marc, he called me and asked if I wanted to work on Marc by Marc. I said yes, of course! I’ve done the high-low thing and I really like creating a language and a designer point of view but really talking to a lot of people. I like seeing stuff I do on a lot of people. That really excites me, and it’s why I’ve been attracted to more mass brands as well as designer brands.

What do you think of Marc by Marc today?
They’re probably ready for a reboot. But it’s amazing what they’ve been able to do. A lot of the team that I started with there has lasted. It’s also just nice to see people on the street still wearing bags that I designed when I was at Marc by Marc. That even happens with Gap stuff; I’ll see someone wearing a style I designed years ago and I’m like, “Oh, I did that!”

What’s totally different about this job versus your previous gigs?
This is so much more fun. So that’s completely different! I love coming to work every day. At Henri Bendel, I have this complete ability to say what I want to say. I’m overseeing artistic direction, so I’m very involved in all the mailers and catalogues; I’m also involved in visual merchandising and the artistic direction on web design. I just love retail: being able to create something, see it in stores, and have the customer experience that and wear it. At other brands, you’re wholesaling; they’ll buy the collection and put it together from their point of view in their store. I’ll see a display and think, “I wish they would’ve done it this way.”

So, is Bendel’s is such a fun place, what’s the second most fun job you’ve held?
Probably Marc by Marc, because it was just a start-up then. It was inspired by how models dress, so it was creating a new language that didn’t really exist in the contemporary market at that time.

How do you design the mailers and other Bendel-branded materials? That’s an interesting part of the gig!
I really like a clean, focused point of view on the web. It’s not a lot of little things; it’s one clear message. I’ll focus on one bag, for example, as opposed to putting a ton of things for people to sort through and be confused by.

What’s new at Henri Bendel? Sounds like a lot of changes…
We’re a specialty shop now, which, in itself, is very unique. You’re able to create a brand, which is different than a department store—that’s multi-brand. In our Fifth Avenue store, we do carry multi-brands but a lot of our product is in the store as well. But all of our other stores across the country exclusively carry Henri Bendel products. Just being able to focus, specialize, and create a brand language is the difference between a department and specialty store.

Have you been a Bendel fan for awhile?
When I moved to New York 20 years ago, it was my favorite store because of the fact that young designers were lining up to show their stuff. We still do Open See, where people come and pitch their product to buyers. You can be from anywhere; your business can be two months or 20 years old. It happens in March and October. Designers will line up the night before and wait! They get great feedback, because our buyers are really honest. If they love it, they’ll buy it, and it’ll be in the store right away. Bendel’s is very fluid, as opposed to maybe Bergdorf’s or Saks where it’s cumbersome [to get on the selling floor] because they’re so big. We really act like a small shop: if we like something, we’ll find a spot and put it in the store. There’s no bureaucracy.

What else sets Bendel apart, besides the lack of red tape?
I call it “the Kate factor.” We’re not about the Kates! We’re not about Kate Moss, Kate Bosworth, Kate Middleton, Kate Hudson, Katie Holmes, Kate Winslet; I can keep listing the Kates. So many brands will pick one of those Kates as their girl, but for me it’s more about the personalities.

Who’s the modern Henri Bendel customer?
I use five girls as my filter for the brand’s personality: we have the chic girl, the glamorous girl, the fashionista, the sporty girl, and the quirky girl. You can also be all five girls, or a combo!

Which Bendel girl are you?
I’m probably the fashionista, with a little bit of the sporty in me. I’m probably not the glamorous girl; well, maybe on New Year’s Eve, but not on a day-to-day basis.

Is this the kind of job you’d ever saw yourself ending up in?
It is. I love the heritage and New York aspects of Henri Bendel. It’s different from my past positions, but it’s probably my most fun job. There’s so much that I love about the brand, the company culture. And, the ability to do things quickly here! The design process is much faster than it was at some of my past jobs; it’s not so labored. There’s this really authentic character about this brand.

Where should the next Henri Bendel outpost open?
London! We’re an American brand, yet we have a lot of heritage—which is something that really comes naturally to the English.

Thoughts on the brand’s signature stripes? Is your life stripy-er since landing at Bendel, down to your shower curtain?
I love stripes, and I love brown and white, so it works for me! When I started, my first thing was to do an in-store heritage shop. I thought there should be a place to have all of the stripes in one place! Everybody thought that was a little crazy—that you’d get a seizure if you walk into a stripe-filled shop. But we did it for holiday, and it really worked. We put our entire striped product in one destination it was kind of cool.

Any special projects happening this year?
We’ve got a few things going on! We’re doing some great things with celebrities that love our stuff…but nothing we can share yet.