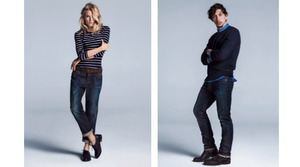 (NEW YORK) Gap is launching their Fall 2013 “Back To Blue” campaign starring Dree Hemingway and Adam Driver, from HBO’s Girls, and shot by Inez and Vinood. Said to be the broadest-reaching campaign in the brand’s modern history, Gap’s latest plan of action will span everything from print, outdoor, direct, in-store, digital and a return to TV for the first time since 2009 as part of the marketing initiative. What’s more? The brand is partnering with Tumblr’s mobile platform and will do a global art partnership with VICE.

Starting today, Gap is launching a contest with Tumblr for digital artists to compete by creating original content on their interpretation of “Back To Blue”. Fashion blogger FashionGif will create the first piece of digital art for the Gap Tumblr. By August 29th, the digital artists’ winning pieces will be featured on the Tumblr page and be turned into mobile ads. It will mark the first time ever that a brand has dominated Tumblr on the ad front, for an entire day.

VICE, whose origins are rooted in street culture, will be taking the Gap campaign to concrete jungles around the world by partnering with street artists like Zio Ziegler, Andrew McAttee, and Roman Grandinetti to create 10 outdoor murals under the project title of “Art of Blue”. The murals will celebrate individualism, optimism and democracy, and will debut in New York, San Francisco, L.A., London, Paris, and Rome. Want to get a first hand peek at this project? On Saturday, August 24th, street art enthusiasts can watch as Grandinetti creates his mural on New York’s Kenmare and Elizabeth Streets. But don’t forget about the clothes! Take a peek in the gallery to see what’s on tap for Fall.

Carolina Herrera Pairs Up With Ari Dein To Debut Sleepwear

Vogue Cancels Collaboration With Vice at the...

Garage Is Here to Resurrect the Arthouse...

Haley Bennett Is the New Face of...