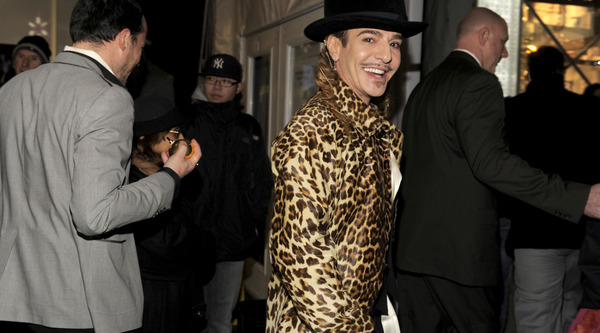 (NEW YORK) In the midst of his super secretive gig with Oscar de la Renta, John Galliano exited a Paris courtoom today with another small victory towards his road to redemption. The news? The French Labor Relations Court ruled that they were qualified to hear the designer’s side of the story, which is bound to come out in his $15 million lawsuit against his former employer Christian Dior and namesake label John Galliano. This is just the first step in what will undoubtedly be a long battle. Galliano’s lawyer, Chantal Giraud-Gaver, said it could take years due to a back-up of cases at the court.

How will Galliano handle all the legal fees? According to the report on his income, which was made public in the case, Galliano was paid an annual salary of $1.3 million at Christian Dior, a percentage of the brand’s sales, plus additional compensation totaling up to $906,400. And how much did it cost to maintain his eccentric style? A clothing allowance of $38,850 and a grooming budget of $77,700. As for his namesake brand (yes, there’s more!) the designer received $2.6 million a year and a clothing allowance of $90,650. These numbers don’t even include other consulting fees he raked in. We’ll let you do the math.

(Not So) Mellow Yellow

Inside The Modern Vice Shoe Factory With Jensen Adoni