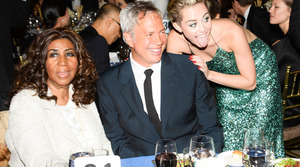 (NEW YORK) Last night Fashion Group International celebrated its annual Night of Stars “Galaxy” awards at Cipriani’s on Wall Street. Tout le monde turned out for the event to honor big names in the fashion, beauty, and interior design biz. Simon Doonan was back again this year to take on hosting duties and he didn’t disappoint. In a “where were they then” monologue, Doonan dished out his own imaginary scenarios of the honorees past 30 years ago in honor of the anniversary. He placed the likes of Carine Roitfeld in the gutter of Montparnase doling out fashion critiques to Angela Missoni taking a vow of poverty in a convent. This would make for a great SNL-inspired comedy skit, non?

After Doonan delivered the laughs, Kate Upton was the first up to the podium to honor Roitfeld for the media award. “Carine sees the opportunities for change,” said Upton. “She was the first editor to put me on a cover wearing actual clothing. Thank you by the way, what an honor.” That was followed up with Upton and Roitfeld hilariously singing Marilyn Monroe’s famous Happy Birthday Mr. President song to Stephen Gan. Hamish Bowles presented the star honoree award to Alexander Wang, mentioning the good times they’ve had together singing karaoke in Shanghai for one of Wang’s store openings. Wang followed up telling Bowles, “Nobody could ever beat you in a special rendition of Elton John‘s song from The Lion King.” We wish we could have been a fly on that wall! Who knew we had all of these fashion industry luminaries that like to sing?

Christopher Kane and Angela Missoni were also awarded as star honorees alongside Wang. Alexa Chung presented Kane’s award while Stefano Tonchi honored Missoni. Diane von Furstenberg honored Nadja Swarovski with the brand vision award, Deeda Blair honored Deborah Needleman with the Lord & Taylor fashion oracle award, and Evie Evangelou and Franca Sozzani were awarded the humanitarian award by Chris Collins, although Sozzani couldn’t be present to accept hers. In the beauty realm, Gilles Andrier from Givaudan took home the sustainability award and Leslie Blodgett, the beauty award. Jamie Drake was awarded for interior design. Taking home the corporate leadership award was Coach, Inc. CEO and chairman, Lew Frankfort who just put a whopping $15 million towards Mayor Bloomberg‘s Hudson Yards project (a.k.a. fashion week’s new home!). Before presenting the award Mayor Bloomberg quipped, “I may not have the creativity of Alexander Wang or Marc Jacobs, but I did create 12 years of mayoral outfits with two pairs of loafers and countless business suits.” Gotta love that.

Meanwhile, leave it to superstar award honorees Marc Jacobs and Robert Duffy to bring down the house by inviting the legendary Aretha Franklin (escorted by Clive Davis) to perform her 1967 hit Respect. Now that’s one way to get a party started!
BY PAIGE REDDINGER

Editors Talk Models Vs. Celebs With DvF At The American Magazine Media Conference