From The Daily’s Hollywood Edition: Jeremy Scott, Womenswear Designer Of The Year 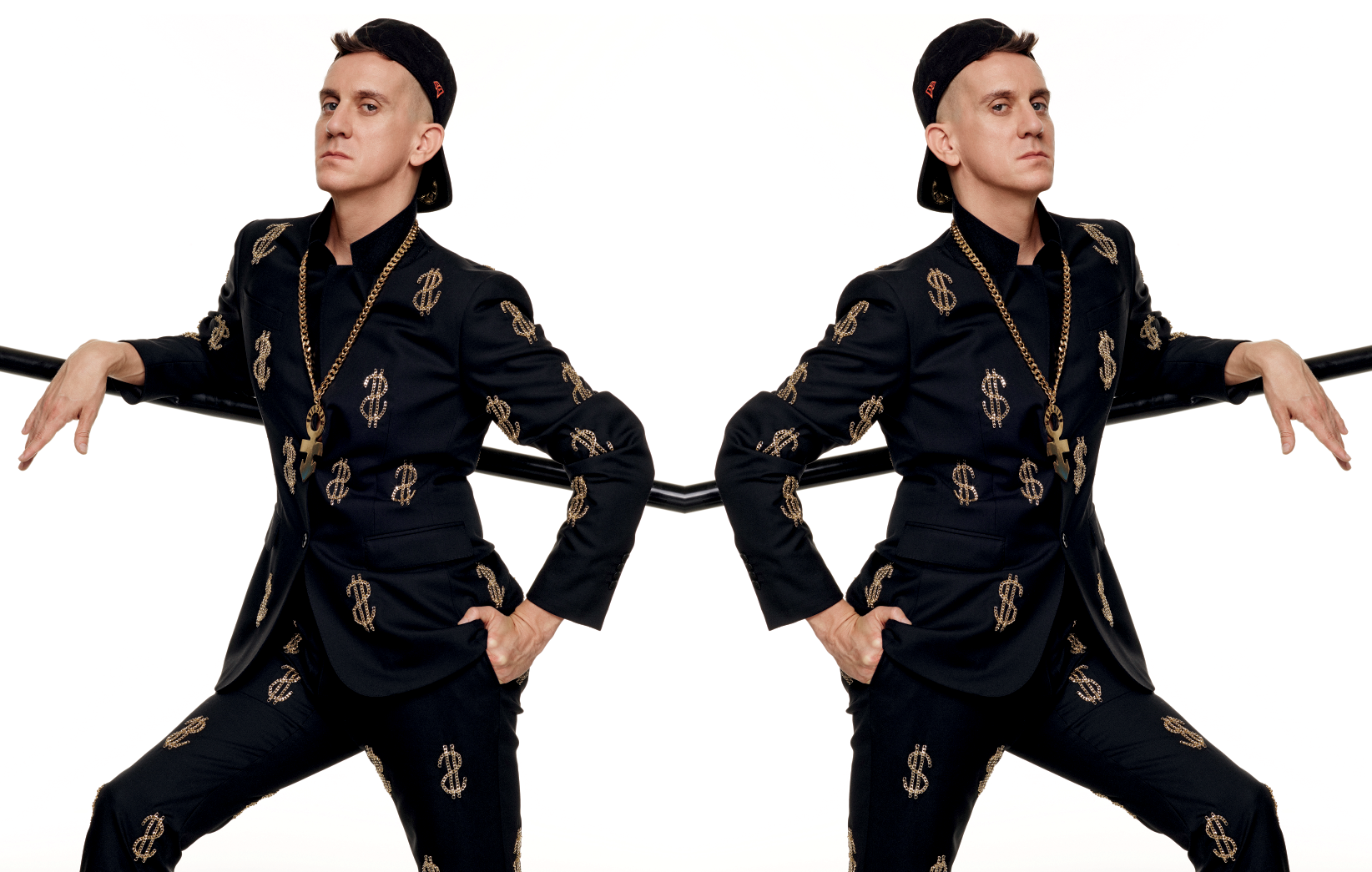 After one short year ruling the roost at Moschino, Jeremy Scott has emerged as the fashion world’s most in-demand enfant terrible. A little bit kitsch and 100 percent catchy, he also designs his eponymous line, as well as a collection for Adidas. No wonder he’s the outfitter of choice for the style set, including Miley Cyrus, Katy Perry, and Rihanna alongside their scores of fans and imitators. And he does it all from his home base in Los Angeles!

What a year you’ve had! First, with your buzzy debut of Moschino…
It resonated way beyond fashion—it resonated with pop culture. It became an ubiquitous thing that everyone understood.

How did you know it reached beyond the fashion world?
I was shocked by all the fan art on Instagram. It was pouring in. There were also daily encounters with people at the gym. Someone would be riding a bike next to me at SoulCycle and say, “You’re everywhere!” Between the debut collection for Moschino, the work I’ve already been doing, launching a fragrance, launching a book, and shooting a documentary, I was busy. Even Katy Perry was like, “You’re having such an amazing year!” I just keep my head down and do my work.

How do you measure your success?
My work has always been about touching people through pop culture and using fashion to speak to them. When people are passionate, I’m excited. It’s also great seeing the clothes on the street. That’s the highest level of compliment. I love dressing all my girls, but it’s different to run into people who have spent their hard-earned cash to buy things they identify with. It’s a very thrilling and humbling experience. Other designers have clients; I have fans.

You’ve described yourself as a “vessel.” What does that exactly mean?
Creativity is like water in a vessel, and you can pour it into different shapes. Creativity comes to me from a higher level, if you will. People always ask where ideas come from, and it’s magic! There’s not a formula for me. These ideas are instantaneous. In that way, I’m a vessel for ideas and then I put them onto paper and onto the runway.

Where do you get your pop culture news?
I read the newspaper, the Internet, TV news, and my daily e-mail from The Daily! I glance at a lot of different things. I have a horrible fear of throwing out a newspaper that I haven’t read.

How does living in Los Angeles inspire you creatively?
I’m just happy here, and I believe that one does their best work when they’re happy. Right now it’s cloudy and gray, but generally, it’s very sunny and there are beautiful blue skies year-round. Los Angeles feels very optimistic. I love the politics of California, which L.A. is a big part of. Part of it is it’s the land of make believe. It’s Hollywood, where you can be whatever you wanted to be and you can make up your own story. I feel like I can cocoon and do my work and be in my own world and be slightly apart from the hubbub of fashion.

Is your house decorated like your collections?
Currently, not at all! I just moved into it in July, so my house basically has nothing in it. My old house was decorated in black and white, which most people don’t generally associate me with. This house is a little bit sexier.

You have a reputation as a partier, but you’re not really a party boy.
I’ve never smoked a cigarette in my life. I do drink on occasion, but rarely.

What do you love about a party?
Parties are joyful—or they should be, at least. You never know what’s going to happen or who’s going to show up, and I love that. I love music, too, which is a key component to a party.

You’re also very family-oriented.
My brother and sister are about 10 years older than me, so in a way, I grew up with a second set of parents. I’m very close with my parents as well. I speak with them often. Generally, my mother and sister come to my show in New York and then they started coming to the show in Milan. My sister has a son, so he’s been coming to the shows since he was born. They’ve been very supportive of everything I do.

Where do they live?
Kansas City. They all live almost within walking distance of one another. I’m the one that broke out. They’re still huddled together like a little pack of wolves.

What does your family think of your life?
They just roll with it. I’m sure there are times that it’s beyond their comprehension. No one’s asked me for anyone’s autograph. They’ve met Katy [Perry] on occasion. There’s a famous photo of her with my nephew at the first Moschino after-party, and he looks like he’s about to burst into tears. And I took my brother and sister to see Miley [Cyrus] this summer in Kansas City. I was home filming a documentary about the farm where I grew up. Miley happened to be there on tour, so they came and met her and fell in love with her because she’s adorable. It’s hard not to.

You’ve appeared on Wheel of Fortune and The Young and the Restless. What would you like to do that you haven’t done yet?
I want to be a judge on RuPaul’s Drag Race. I love that show! That was always a guaranteed night of laughs. I love when people have humor and self-reference. That’s what I did with The Young and the Restless. They had me play myself. I had this whole scene where I was showing sketches and talking about how it was my dream to sell at their store.

You’ve also worked with Miss Piggy. Details!
You get so drawn into the personality that the puppeteers don’t really matter. I was instantly transported to childhood. She and Kermit were kind of bickering and I was in the middle of it. I loved it. She’s a diva, but I’m used to working with divas.

Why are icons drawn to you?
My work synthesizes a message that they often are trying to convey. I’ve always loved musicians the most, because their job is to turn up the volume on their personality. My work does that, too. It’s very bold. It’s a love-it-or-hate-it situation.

Are you comfortable with that?
I am now; I might have been less so in the beginning. It’s like, “Why do you hate me?” I never understand why people get so bent out of shape about something that they don’t like, especially when it’s not political. I understand when people want to fight about Ferguson, but this is literally about clothes, style, a haircut. I don’t get myself bent out of shape about boring things.

Why did Style.com refuse to cover you for years?
It all stemmed from [the collection] “Sexibition.” There was never an explanation of what happened. In one way it’s amazing, and I have to look at it in a prideful way because if my work is that powerful, it can be strong and inspirational. I feel like I’m one of the few designers who elicits a strong reaction. There’s was a New York Times article about the rise and fall of Jeremy Scott, but I’m still here.

The Daily loves Jeremy Scott. Thank you for accepting our award!
I am so flattered. I’m very blessed. I never win anything, so I’m really touched.

PLUS! Chicsters Weigh In On The Power Of Scott
Suzy Menkes: “Jeremy should have been born British! He has a sense of irony—in life and in fashion—that I rarely see in the U.S. Although in many other ways he acts typically American, as those of us from outside see it. Having first met him and seen his work in his early days, I believe I actually wrote in the International Herald Tribune that he was in the spirit of Franco Moschino. I know this because his sister claims she still has the clipping! Jeremy is close to his family, and there is something of the eternal child in him. I have always felt dispirited by ‘grown-up’ fashion, so I enjoy his sense of cartoon fun.”

Arianne Phillips: “Jeremy is a fashion iconoclast. His ability to translate and turn popular culture on its head and feed it back to us makes us hungry for more. He has the uncanny ability to create play and fun in a world that is often overdramatized and full of itself. His lust for life and his wink and a nod are a constant breath of fresh air that reminds us to dress up and have fun.”

Anna Dello Russo: “Jeremy is a magician of marketing communication, beyond the product itself. In this era where communication is 70 percent of the social connective tissue, Jeremy is a highlight.”