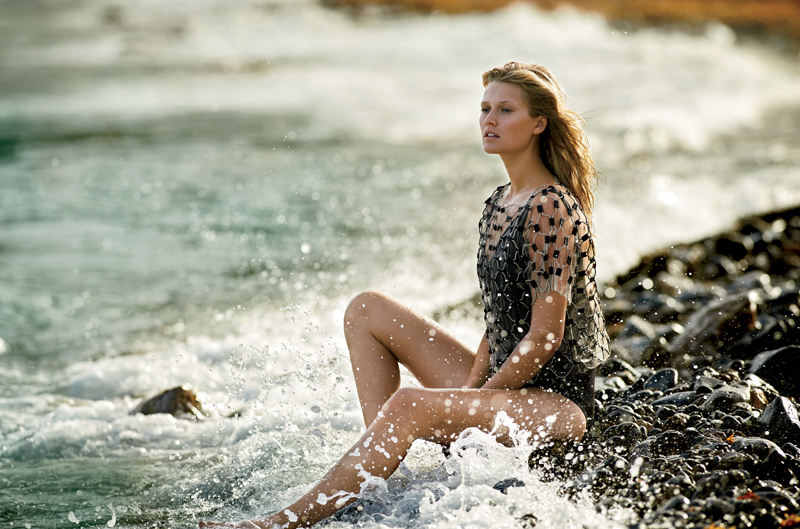 Who better to show off l’esprit of St. Barth than 22-year-old Toni Garrn? The German stunner spills on her impressive career, childhood memories, and the extracurricular project that’s near and dear to her heart.

This isn’t your first time in St. Barth. Why is it so beloved?
It’s in the Caribbean, which is beautiful and has perfect weather. It’s stunning—my favorite part of the world! St. Barth is special because it has everything you want.

This isn’t your first time shooting in St. Barth with Gilles Bensimon, either.
Gilles shot us here for French Vogue with Karlie [Kloss] and Andreea Diaconu. We’re really close friends. This shoot was fun, because I usually stay by myself in hotels, and The Daily Summer put us in a villa. It was like having roommates.

Did you have trouble getting any shots?
There were a lot of rocks, and Gilles wanted me to move a lot without looking down. There were sea urchins everywhere and I was barefoot. I didn’t want to get stung! I’m also very aware that there are a lot of paparazzi on the island. I’ve never really shot here without being snapped, so whenever we had to change clothes right on the beach, it was a little tricky. But I love the beach and being outside.

What’s special about working with Gilles?
He’s so funny! He makes fun of everyone on set. He gave everyone different names. He makes things very relaxed, and everyone is in the best mood ever. We’d also have a long lunch break. He really believes that when everyone is comfortable, especially the models, we get the best pictures. I agree!

What were your childhood summers like?
I was brought up between London and Athens, and I moved to Germany when I was 10. I was very lucky because when we were living in Greece, my mom took us straight to the beach after school. I had to do homework on towels! At the time I would complain that it was sandy, but now I’m really thankful that we did that because I feel very connected to the ocean. I sometimes wonder if my hair is still so light because I got so much sun! When we moved to Germany, I had a bunch of cousins living there, and we’d travel to places like Denmark, where my grandparents spent their summer.

What is so special about summer?
To me, it means family. My birthday is in July, so I usually take some time off. But ever since I was 16, I’ve been traveling to amazing places throughout the whole year, so my summer doesn’t limit itself to just a few months.

How has modeling changed since you started out?
Models have more of a voice and a say. Social media has changed things a lot since I started out seven years ago. With Instagram, I’m getting so much back from the fans. They also post so many pictures of me that I might not otherwise see. Everyone who follows me gets to see what I’m about, and it makes my job more fun.

Do you stress over what you post?
A little bit, since there’s such a big following on social media. I want it to be very real and me. I don’t want to come across the wrong way, which is hard when being funny or sarcastic at times, but I also want to make my posts more interesting.

Tell us about your work with the charity Plan International.
Plan International is a child-focused organization operating in more than 50 countries and founded over 70 years ago. They protect the rights of children and young women, and I’m an ambassador for the “Because I Am a Girl” campaign. I started working with them by sponsoring children when I was 16. As I got older, I told my mom that I wanted to do more, and she suggested I work with someone on a larger scale. My first foray into collaborations was with this German jeans brand called Closed, where I designed a pair of jeans and two T-shirts. The profits from the line went directly into a project in Africa that provides scholarships for the impoverished women of Burkina Faso, which is one of the five poorest countries in the world. As a result of the money we raised, about 140 more women were able to be educated as primary teachers. I keep asking where they need help and what I can be doing. I did a flea market in February where I sold half my closet and asked the other models to join in. We raised about $25,000 in two days! Those are just baby projects—I really want to do more. Natalia Vodianova and Christy Turlington Burns are big inspirations.

What do you get out of this?
I love helping kids. If there’s a kids’ corner at a party, that’s where you’ll find me. I want a lot of kids myself—at least three boys.

Are you a tomboy?
All my friends are girls, and I like girl talk and girlie music, but I can do whatever. Give me a backpack, and I can travel for a month.

What’s your definition of girlie music?
I love Latin music. Samba and salsa—no rap at all!

Any plans for college?
I’m taking a public-health class right now, which is related to my charity. It’s teaching me about illnesses worldwide. As for going to university, I already have so much going on that the class is enough for now. Maybe in 10 years if I’m working less and living in the same place—these days, I’m only in New York less than half the year because I also have a place in Germany.

Are you interested in acting?
I’ve always loved theater in school, especially comedy. My friends who know me well know that I’m not very serious. I’m very sarcastic.

Do you have to be outgoing to be a successful model?
I think so. It can be quite boring if you take it very seriously, so I dance around and I say, “Let me know when you’re all ready!” I don’t like being the center of attention necessarily, but I like being a clown.

Your full name is Antonia. How did you end up as Toni?
In Germany, lots of Antonias are called Toni! So when we moved there when I was 10, they just called me that, and I loved it.

Have you been to many of the farms in the East End?
Not really, but I love the beach here. It’s so wide and beautiful. It reminds me of Denmark. I’ve also been in the area in the winter and it’s really cozy. We shot the Tommy Hilfiger campaign in Sag Harbor.

You come off as a very happy person.
I am, and ever since I’ve been working with Plan International, I appreciate everything a lot more. I want to be even better at this job, and have a bigger voice.