From The Daily Summer: The (Francisco) Costa Living 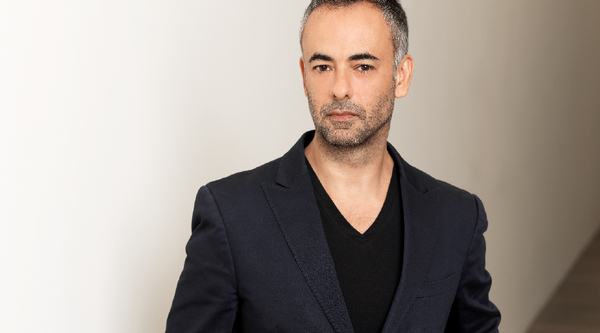 (NEW YORK) Creative director Francisco Costa is about to celebrate his 10th anniversary with Calvin Klein Collection in September, but even a genius needs to take a little time off. The Daily Summer sat down with him to ask about how he spent his vacation and what he’s been cooking up lately.
BY EDDIE ROCHE

We’ve seen you in the Hamptons a lot over the years!
I love it. The whole lifestyle is expensive, but very chic. It is incredible that on a little island like that there is such an incredible influx of wealth. I love to go to the Hamptons and shop. I enjoy it even more in the fall when you can stroll the beach in a cashmere sweater. I did have a house in East Hampton for a period of time, but I ended up selling it.

And now you summer in Bellport…
It’s wonderful because Bellport is so unorthodox and so un-Hamptons. It’s a special pocket and you have to be a certain kind to enjoy it; some people get flustered and others say there isn’t enough to do. You can go on a bike in your pajamas to get coffee in the morning! It’s very quirky and unpretentious.

What’s the aesthetic of your house?
I have a one-of-a-kind Georgian home. It was built in the Twenties with bricks from another house, so it is rather formal and the rooms are very symmetric. It carries some great history with it. The Natalie Wood and Pat Hingle movie, Splendor in the Grass, actually shot there! It’s romantic and has a very English feel to it.

What are your favorite summer activities?
I swim a lot and I love to read. I also cook a lot! I’m not very good with recipes, but I have made attempts this summer. I [recently] tried to make a meal for my friend’s birthday. It was so much work because I really paced the dinner; there was a first course, second course, and third course.

What did you make?
For the first course, I made this delicious asparagus soup with artichoke hearts and a touch of truffle. The second course was a chicken terrine with a salad, and the third was this blend of cheeses like ricotta with peppers and pesto, and then there was a fig dessert. It was very nice! But it had to be timed because the terrine had to be done overnight. It was a whole process.

Sounds exhausting! Do you watch TV to wind down?
I don’t.

Music?
I don’t listen to music.

Movies?
I recently saw Foxy Brown. It was kind of cool to see something quirky like that. There is a camp sexuality to the film, almost like Superwoman. There was a brutal sense of style.

Are you giving us a hint that your spring collection is going to be Foxy Brown inspired?
[Laughs] No!

You’re rocking quite the tan. Do you worship the sun?
I don’t actually! As a kid, I was always on the beach. My parents had a house on the beach and we used to spend about 20 days there in the summer and I remember really worshipping the sun. Now, I just don’t put any sunscreen on. If I’m working outside gardening or in the pool, I’m  getting tan, but not trying to. I’m dark already!

What were summers like in Brazil?
I have great memories there. I grew up inland and so we had a house in Quarapari. I come from a middle class family so it was a big deal for my parents when we got a beach house! We used to picnic on the beach and would stay on the beach from morning into night. My mom used to bring a lot of people there; we had guests all the time. There was never a dull moment. I have great memories from that time; my father eating fresh oysters and all the nut trees on the beach. It was so lovely.

Do you think the beaches in Brazil are better than in America?
They’re just different. In Brazil, you are exposed to it all the time, but here people go to the beach depending on the weather, so there is almost a romantic aspect to it. The beaches in the Hamptons are just amazing. In Brazil, they are tropical and there are miles and miles of palm trees.

Have you taken a vacation this summer?
I took the two weeks in Bellport, but I actually came back to the office one or two days in that time. I also rented a house in Fire Island, but the weather was so crappy.

Why do you think so many fashionable types are attracted to Fire Island?
It’s very sexy and it’s very private. It’s aesthetically gorgeous and there are so many beautiful bodies…so many beautiful men. I can’t speak much of Fire Island because I never lived there, but everyone who lives there finds it magical. There are no cars, but just boardwalks and there is something romantic about that. Fire Island has its own character.

August must be a crazy month for you with the show coming up.
It’s lockdown. You go into that mode of working every single weekend in August without exception and it gets very intense. I get to the office at 8:30 in the morning and leave at 11:30 at night. But that is the fun of it! You get to see all of the material come in and put the silhouettes to work and see the clothes evolve. It is an ongoing process and I find it fantastic. Some designers just get their collection done really quickly and once it’s done, it’s done. But I’m not like that at all.

Do you wish you were?
I don’t think so. I have so much fun doing it my way! It is so representative of the moment.

Carolyn Murphy walked in your Fall 2013 show. Why did you bring her back to the runway?
There is a lack of stardom today. When you think of the Nineties, you think of Calvin, Kate Moss, Carolyn Murphy, and they were very established. Today it is too fast, and we are not giving time for girls to become girls, and to establish themselves. Carolyn started with Calvin and so did Karlie [Kloss]. Karlie was actually an exclusive with Calvin and she was so shy and so lovely. Today she is so confident. She has really taken ownership for the way that she moves and acts and that is beautiful.

Why Is Zosia Mamet A Double Threat?