From The Daily Summer: Sant Ambroeus~ology 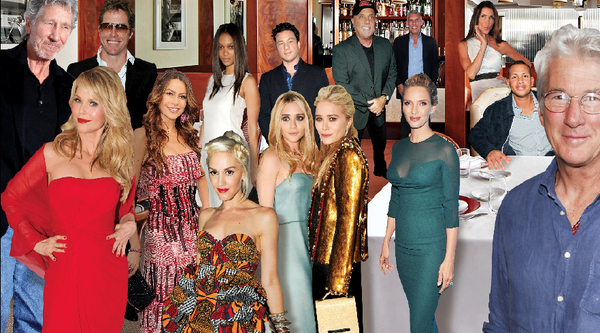 (NEW YORK)  A morning jaunt, whether it’s a leisurely, pre-beach Saturday in Southampton or a busy, pre-work Tuesday on the UES, isn’t complete sans a cappuccino at Sant Ambroeus. Just ask the elegant Milan-founded spot’s fashionable regulars. The Italian original is 77 years old…and much has transpired since its birth! Dine on the tasty tale of a hautespot that feeds the fanciest crowd.
BY ALEXANDRA ILYASHOV

PART UNE: Saints And Sinners! The Secret History
Craving the scrumptious story of Sant Ambroeus, aka the Euro-chiciest spot out east? Bon appétit!

1936: A modern classic is born! Sant Ambroeus Pasticceria and Confetteria in Milan debuts on Corso Matteotti.

1983: Hans and Francesca Pauli open Sant Ambroeus’ first stateside location! The UES outpost on Madison Avenue between 77th and 78th Streets. The gelato quickly becomes the stuff of lust and/or lore, rumored to be the best outside of Italy.

1986: Franco Festorazzi snaps up the Milan location and has kept the chicster classic in the family ever since. Currently, Simonetta Festorazzi Lange, daughter of Franco, runs the delectable institution.

1992: Hans, Francesca, and Dimitri Pauli open a Sant Ambroeus in Southampton. Pourqoui? A dearth of suitable local spots near their Hamptons home to caffeinate, Italian style.

2001: Much to the dismay of legions of loyal customers, Sant Ambroeus on Madison closes. Quelle horreur! The well-heeled breakfast club has to find their perfectly poached eggs elsewhere.

2003: A third location opens in the West Village, on the corner of West Fourth St. and Perry St. Downtown fashion types and myriad famous faces quickly make the spot a key paparazzi perch.

2005: Joie for Sant Ambroeus’ Park Ave. posses and Fifth Ave. fanatics! The beloved restaurant reopens its doors after a four-year hiatus. The Upper East Side breathes a collective sigh of cappuccino-craving relief.

2010: Redesign time for the West Village location! The aesthetic chicification hews to the eatery’s Italian roots, thanks to Murano glass chandeliers and booths gussied up with vibrant Etro prints.

2011: Southampton’s Sant Ambroeus gets a decor reboot, thanks to Robert McKinley, the same design whiz who refreshed the resto’s West Village location (plus Nolita’s GoldBar and Montauk’s Surf Lodge). McKinkey was inspired by Italian style circa the ‘60s and ‘70s, avec B&W photos of Milan and the Hamptons.

2013: Come fall, Sant Ambroeus will take over the storied power breakfast at Loews Regency Hotel, once the hotel’s revamp is complete. Plus! Two more  eateries bearing the Sant Ambroeus name will hit NYC in a few months: one will be housed in the spruced-up Loews and the other will be situated in Nolita.

PART DEUX:  A Moment With Sant Ambroeus Co-Owner Dimitri Pauli
How did the Hamptons location come about?
I was vacationing there and couldn’t find a place for Italian cuisine, a good cappuccino, and espresso bar like there is in  Manhattan. A lot of our Manhattan clients felt that way too. This gave us the extra push, if we ever needed it, to open a Sant Ambroeus in Southampton.

Are there any particularly meaningful dishes on the menu?
Fried calamari. It just evokes memories of summer, and of my childhood in Italy!

How often are you at the Southampton location?
I spend every weekend out there!

Does the East End location feel different than Sant Ambroeus’ other outposts?
I love it because everybody is more relaxed than in the city.

What’s Sant Ambroeus’ scene like out in Southampton nowadays?
Our clientele is local, from Manhattan, and international! Especially Europeans and South Americans on vacation. It’s recognized as a “not to be missed” destination for lunch, dinner, breakfast…and afternoon gelato.

Sant Ambroeus  is adding two new restos this Fall! What’s next?
We always keep our eyes open for new opportunities, but we pass on many more than we take.

Which dish do customers fawn over the most?
Cotoletta alla Milanese [veal cutlet].

What kind of grub is most fun to whip up?
Branzino alla Griglia, as well as the fresh catch of the day. I can get creative with new recipes and cooking methods!

What are the best local ingredients on your menu?
Local sea scallops, striped bass, baby calamari, and fresh herbs.

What’s the toughest ingredient to source out in the Hamptons?
Non-frozen Dover sole.

How did you join the Sant Ambroeus kitchen club initially?
I came to Sant Ambroeus’ Madison Avenue location as a baker 15 years ago, and worked myself up from garde manger to line cook. I was fortunate to be taught classic Italian cuisine by Sant Ambroeus’ executive chef, Mario Danieli, during those years.

How did your current gig come about?
I was given the opportunity to become chef de cuisine at Sant Ambroeus Southampton, and I combine what I learned in Italy during my time at Sadler restaurant in Milan, traditional Milanese techniques, and my personal taste and love of native Italian food!

ALSO! Pretty Packaging Alert…
Adoring the Sant Ambroeus logo’s pretty grapefruit hue and delicate, script-y typeface festooned on all of its restos and tasty products? NYC branding firm Mucca Design is to thank for the vintage charms of the eatery’s aesthetics. The logo pros also worked on sister resto Casa Lever. Sant Ambroeus is in stylish company: Balthazar, Rizzoli, and GQ Italia are among Mucca’s clients.