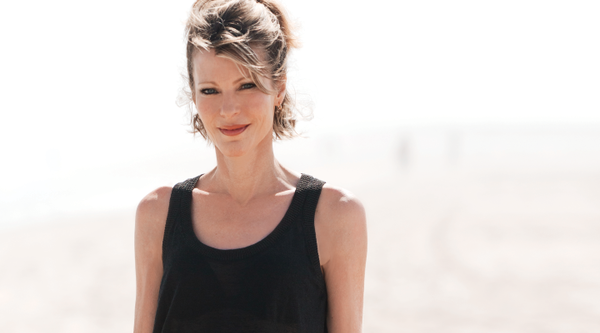 (NEW YORK) Elle editrix Robbie Myers has been coming out East since the Sixties. Her summer M.O.? Marathon sessions at Indian Wells Beach, hanging with her cousins, and reading three books at once.
BY ALEXANDRA ILYASHOV

You grew up in Colorado and Florida, but have been coming to East Hampton longer than most people. Please explain!
My uncle and his family moved out here full-time in the late Fifties, and we’d come and visit them every summer. He was an editor at Playboy, and then ran Modern Screen, which was a big deal back then. He moved out here to write books and got immersed in the whole writer and artist scene.

Is your family still out here?
Oh, yeah. They all live, like, five or six houses apart from each other, so it’s like a mini-compound. I love having that for my kids. Both of my cousins have children the same ages as mine, which is so fun. One cousin owns a restaurant in East Hampton, called Highway Diner, and my other cousin is a writer. She sometimes writes for Elle. My aunt teaches tai chi.

Do you practice?
No, not yet. She says that I’ll discover tai chi “when I’m ready.” She’s so hilarious.

What do you think of the ‘hood today?
East Hampton is such an interesting collision of cultures—artists and writers, very old money, new money, a big immigrant population, parts that are ultra-conservative, parts that are ultra-liberal. For such a small place geographically, that’s a lot of different cultures. And they’re not all seamlessly integrated.

What’s special about Indian Wells?
It’s one of the beaches I’ve been going to since I was a kid. It’s big, beautiful, and super family-friendly. Everyone gets slathered in SPF 55 and we spend all day playing sports, swimming, and running back-and-forth to the snack shack.

What else do you get up to out here?
I know it’s a great weekend if we don’t use the car. My daughter and I like to bike to town a lot. We’ll go to Sam’s, Dylan’s Candy Bar, Scoop, Ralph Lauren.

Do you garden?
There is gardening done, sure, but my husband does most of it.

Bless him! What else don’t you do?
Clubs. We definitely do not do clubs anymore.

Are you a big beach reader?
I am. The problem is, you can’t read anything on the iPad in the sun, so I’ve gone back to old-fashioned paper books, which I’m actually quite enjoying. I just finished The Marriage Plot, which was really good, and Joe Kennedy’s biography, and also a  thriller, though I can’t remember the name of it right now. I usually try to read three books at the same time, so can go back and forth.

Are you a skimmer?
Well, I don’t have a lot of time, which is why I overlap what I’m reading! If you consider social media, then I do a lot of “reading,” but I don’t have an enormous amount of book time.

What about magazines? What’s at the top of your pile?
Psychotherapy Networker. There’s a lot of good research around psychological issues that we sometimes use to back up articles in Elle.

Do you ever read Elle?
I can’t. I’ve read it so many times already by the time it hits the newsstand. My mind has already moved on to the next one!

How does it feel to see someone else reading it?
Great. I fly a lot, so I see that often. We do well with travelers. I always look at how many magazines are in stock at the airport.

Any major new developments afoot?
We’re doing a redesign for September. We’re ready, and it was time. It’s been a very careful process. The magazine is doing really well, and that’s when you make changes, rather than waiting to respond to a crisis. We’re going to have our biggest September issue ever. In fact, it’s the biggest issue Hearst has ever published.

Congrats! How long has the redesign been in the works?
We’ve been talking about it for about a year, and we really only started ramping up four or five months ago. It doesn’t just involve the magazine; it’s the website and the tablet, too. It also involves a different way of thinking for the staff and what it is that we’re doing here, exactly.

Why Kate Upton for the September cover?
Because she’s sexy, and the way she thinks about her career is very interesting. And we loved the idea of using a model for the September issue. It’s a fashion statement. It’s not what everyone else is doing.

What’s your all-time favorite cover?
I wouldn’t say it was my favorite, but my very first cover was Britney Spears in couture. It was 2000 and she was still an up-and-coming pop star. She hadn’t gone through all her different identities yet. It made some people really mad, which made me happy.

You’ve been in the news a bit yourself lately defending womens’ magazines. A recap?
It started with that Port magazine cover about the best American editors, who were all men, and picked up after the New Republic did a story about women’s magazines and serious journalism, questioning whether they value good writing about important topics. Of course we do! I felt I needed to challenge some of those ideas. I was on the ASME [American Society of Magazine Editors] board for a long time and it’s something that’s such a part of our mission. For someone to dismiss our mission was upsetting.

Have you gotten much feedback?
The comments are very interesting. Everyone who’s contacted me has been very positive. Some people are going to have alternative ideas, of course, but strong opinions are good.

From The Daily Summer: Olivia Chantecaille In Bloom