From The Daily Summer: Olivia Chantecaille In Bloom 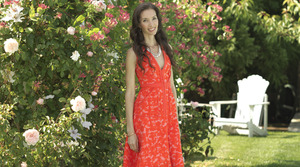 (NEW YORK) Franco-American cosmetics heiress Olivia Chantecaille might have been born into the beauty biz, but she’s never been one to rest on her laurels. Her formula for global domination? Botanical stem cells, Parisian pluck, and 24-karat gold. Spending weekends in East Hampton helps, too. BY PAIGE REDDINGER

Your mother, Sylvia, founded Prescriptives and then Chantecaille. Do you remember the first time you got into her makeup?I can hardly recall I was so young! I remember we had a bathroom with an enormous countertop and closet that was just filled with products. When she was at work I was in there all the time putting makeup on my dolls.

What’s in your beauty bag these days?
It’s a pretty big bag! In summer, definitely our Ultra Sun Protection SPF 50. The sun is getting stronger and the damage is just getting worse and worse. In general, I’m also a big blush person. I definitely like to have a little bit of something on my face, whether it’s a tinted moisturizer or foundation.

Are you involved in creating new products?
Oh God, yes. That’s what I do! I create all of the new products, do the trend forecasting, and come out with all of the collections and colors. Right now, I’m working on next spring and summer, which is so much fun. It’s warm, so I’m inspired to actually create stuff. I’m really influenced by fashion. I have a lot of friends who are designers, and it’s great to see what they’re creating and what we’re going to be wearing because it relates to the kind of makeup people are going to want. If there’s a really strong trend color it’s going to translate to makeup.

What are the cool colors for Fall?
A lot of earth tones. A lot of browns, neutrals, beiges, and burgundy—deep, rich colors.

Is it hard to keep coming up with new products? There are only so many shades of lipstick…
It’s tricky, but the fun thing is the technology. There are always new formulas and formulations—ones that are better, more comfortable, more wearable, with more treatments and fewer irritants. People are becoming more adventurous and comfortable with makeup.

There’s a whole subgenre of self-help books now extolling the virtues of French women—they don’t get fat, they don’t sleep alone, etc. What else do they do that’s special?
This actually has a lot to do with why our line was created in the first place. The big secret with French women is that when they dress, they dress for the men in their lives. American women dress for the women in their lives. They want to impress their friends. They wear a dress because they want their friends to say, “Wow! That looks great on you. Where did you get it?” In France, they don’t care what their girlfriends think. They want to know what their husbands or the guy down the street thinks.

Was taking care of your skin a big deal when you were younger?
My mother was pretty easygoing, but she was definitely always there for advice and always had these amazing products. A lot of my vacations were spent with her going to labs to see new collections. It was always really interesting. I was always drawing or painting, so I’d use the lipstick pencils and the eyeliners.

Any major new trends we should know about?
We’ve been doing a lot of research work on plant stem cells, and that’s definitely a growth area. We were the first ones to come out with products using apple stem cells, and we’ve been doing a lot with raspberry stem cells, too. Plant stem cells actually marry themselves with our own stems cells better than anything else. Animal stem cells are rejected by our cells, whereas botanicals actually merge with them. The other thing is gold. The healing powers of gold are truly fascinating. We have a whole collection now using gold. It was something that my mother grew up with. They would use colloidal silver and gold to treat people with burns. I know that in Russia they used gold thread to seal people’s cuts and wounds. They use it to treat multiple sclerosis and arthritis, too. What we’ve noticed for the skin is that it’s an amazing healing agent. For people who’ve had a ton of skin damage, it’s a great product. Also for people going through chemotherapy; we’ve had so many clients come to us. Our gold line is something that actually saves their skin!

What’s the craziest treatment you’ve ever had done?
Bliss used to sell this oxygen cream. No one told me this, but it would turn my eyebrows orange! I’ve never had one, but the knife facial is also pretty extreme. It involves using a sharp knife as an exfoliator. They scrape the surface layers of skin off your face! I just think, “What if I sneezed?”

Tell us about your other foundation—the charitable one.
Basically, since we’ve launched the line we’ve been wanting to give back in some way, so we now create special palettes every season that are focused on a charity that is either ocean-related or focused on an endangered species. We work with specific people to make sure that the money we make goes directly to the cause and really makes a difference. We try to find things that are urgent—the emergencies in nature that need attention right away. Interestingly, we’ve realized that when we do pick a charity, all of a sudden it’s in the New York Times every day. We did this great thing on elephants to help prevent poaching in Africa, and it turned out to be in every newspaper around the globe. It bubbled up into something big. This spring, we did something with shark finning. I know a lot of people are afraid of sharks, but they are actually a big part of the ecosystem. Without them, there would be overpopulation of other species.

What are your favorite things to do in the Hamptons?
Well, I’ve been coming out here my whole life. I love going to the beach, paddle boarding, and picnicking on the boat. I really love being near the water. It’s just so calming after a crazy week in the city.

What are your summer go-tos?
They’re probably everyone’s favorites at this point! Round Swamp for picnic foods, definitely. I also love Tiina Laakkonen’s store in Amagansett. As far as restaurants, Tutto Il Giorno and 1770 are terrific. We like Dave’s Grill and Joni’s, too.

You’ve seen the Hamptons evolve. Do you remember the moment when it started changing?
It was gradual. It was creeping up slowly and slowly, and then it just exploded. It’s still beautiful. You just need to know what back roads to take.