From The Daily Summer: (Joe) Zee Of Tranquility 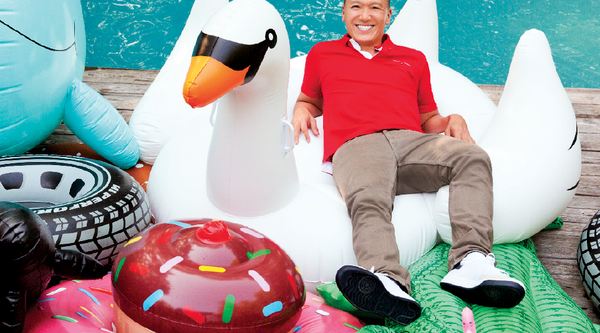 (NEW YORK) When super-stylist Joe Zee needs a break from the fashion madness, he heads to Sag Harbor to hang with his inflatable friends. Here, Elle’s main homme walks us through his weekend routine—and the fashion summer camp he’s launching in East Hampton.
BY ALEXANDRA ILYASHOV

What’s your first memory of the Hamptons?
I was working at W magazine in 1995, and we had a photo shoot out here. I was just a kid. I remember thinking it was kind of nice, but that everybody was so much older. I didn’t think it was for me!

What changed?
Well, about a decade later, I came out for an engagement party for my friend Rebekah McCabe at Chanel. That same weekend, I decided to look at houses; a friend of mine recommended a real estate agent to me, and everything just snowballed really quickly! My friends told me I had to buy something. The following weekend I rented a car, went back out, looked at some houses, and got one right away! Things can happen that are meant to be. The price also went down on the house I wanted.

What’s your pad like?
I’m in Sag Harbor, a couple minutes from town. It’s just a teensy bit off the beaten path, set back on over an acre of land, with a pool. When I bought it, it had wood paneling from floor-to-ceiling. It was a bit like Disneyland’s Frontierland. The only thing missing was a bear jamboree.

But then you Zee-d it up? I did indeed. I renovated in ’06—it took, like, a year-and-a-half to renovate. Now, it’s a modern black box. It looks like a Fire Island house. I’m just a really modern and contemporary guy; that’s what I’m most comfortable with. I’m not really a countryside, English Tudor, shingles kind of person. I wish I was sometimes, but I’m not! The neighbors are really nice. It’s a very motley crew out here.â€¨

You’re starting a fashion camp, called Stitched, with your boyfriend Rob! Pourquoi?
There are after-school programs that teach kids how to sew or draw, but putting fashion industry elements into a two-week program is new. Technical stuff is the camp’s thrust, and that’s all Rob. â€¨

Who else is involved?
Our friend Nicole Miller tweeted that she’s obsessed and wants to come by! And Stacey Battat, The Bling Ring costume designer, is also a friend and wants to be actively involved; so does our friend Esther Song, who does Tory Burch’s celebrity dressing.

Would you have attended Stitched back in the day?
I’d be freaking out. I’d haul myself out to East Hampton! When I was 16, someone told me I should be a stylist and I said, “I don’t want to do hair.” I had no idea styling clothes was a job.â€¨â€¨Have any adults tried to enroll? Totally. Some woman said, “I want to do it with my daughter!” We didn’t completely say no…but we don’t want to turn this into a mother-daughter night.

Ha! So what’s your weekend routine like?
Everybody always wants to come, so my boyfriend Rob and I end up hosting different people. We watch movies, cook, and swim. It really is a place where I get to hang up my [creative] director hat and be a caterer. I love cooking for, like, 15 people. Even if there are only two people coming, I’m still gonna cook for 15! I’m gluttonous, I love trying new things, and I’m obsessed with food. I’m always telling guests to give me a cuisine theme, and I’ll try to master it.

Where do you shop?
There’s incredible homemade mozzarella and herbs at Red Horse Market, fresh fish at Citarella, and Loaves & Fishes is also a favorite. If I want it, I get in the car and go. I have no shame. I’ll drag my guests to five different grocery stores when they’re visiting. I could literally go to the grocery store every single day. There’s something about them. Walking through grocery aisles is my jam.

How about farm stands?
I love the cherry tomatoes at Pike Farm Stand. If I see a sign that says “local zucchini,” I don’t know what I’m doing with those, but I’m getting them and I will go home and figure it out. When I lived in L.A. last summer, I’d go to the farmer’s market at, like, 6 a.m. every weekend, get the weirdest vegetables and fruit, and concoct something.â€¨ Does Rob, help out in the kitchen? We’re really good; we’ve totally mastered a rhythm. We do things simultaneously. Rob’s great with drinks and dessert. I’m not methodical in that way. I have no problem deviating from a recipe, but Rob would never do that.

Do you go out much?
Oh God, no! We’ll go to restaurants sometimes, but never to bars. Suki Zuki in Water Mill is a great Sunday stop to eat at and then drive home, and we sometimes take friends to Almond on Friday because it’s a ruckus—just a fun gay party. We also hop on the ferry to Shelter Island for Vine Street Café. It’s become a tradition to go there the night before New Year’s Eve with friends. It’s not packed, but it’s not deserted, and the food is amazing.

What’s the deal with the inflatables?
I have an obsession with pool floats! I did a W shoot a long time ago with Bruce Weber and a bunch of pool floats. My fantasy of fantasies is to have beautiful girls and beautiful guys in the pool with beautiful floats. My friends tell me I have too many floats. Every year I have a Shamu and a crocodile. This year, Rob picked up the giant pretzel, so I wanted a food and animal theme. Our friends bought us the cupcake and the doughnut. There are probably 10. They’d literally clog up the pool if I didn’t rotate them. We also have pink flamingos that hold drinks. It’s the best kind of tacky to me, but I barely go in the pool! I fell in the other day. It was the first time I’d gone in in two years.â€¨â€¨â€¨

PLUS! Getting Campy With Joe’s Beau Rob!
So, Rob. You’re starting a fashion camp for  tweens at East Hampton’s Guild Hall in August. Please explain!
I’ve been a Parsons professor for nine years, and I’ve been thinking about this camp idea for two years now.

Have you worked with kids before?
Six or seven years ago, I was the “fashion coach” on an episode of MTV’s Made. I also created a fashion program with a kids’ arts studio in Montclair, N.J. I wanted to branch out, and Joe  encouraged me to make it happen. So here we are!

Did you go to camp as a kid?
If I ever played sports, it was at camp, though I always broke a bone. My parents were always devastated, but I was thrilled. It meant I didn’t have to play any more sports! I preferred going to grandma’s for the weekend to work on my Halloween costume.

Who’s more of a natural counselor, you or Joe?
Definitely me. I’ve always had that personality. I’m sort of everybody’s caretaker.

Now that DOMA’s history, are you guys planning to get hitched anytime soon?
I think Joe’s waiting to be asked. [laughs]

RIP China Machado: “I laugh all the...