From The Daily Coterie: Romancing The Stones With Erickson Beamon 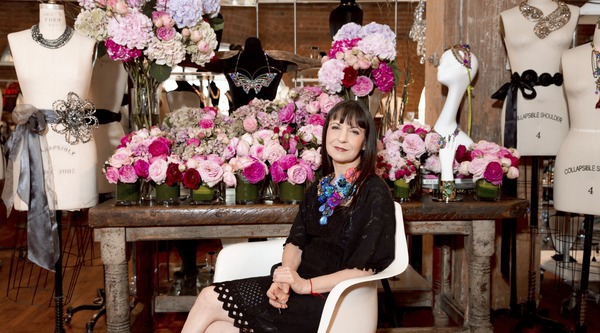 (NEW YORK) Didn’t nab a pass to the Coterie trade show? Not a problem! The Daily got up close and personal with the biggest names in the game to bring you some exclusive coverage. First on deck: Erickson Beamon has collaborated with the biggest names in the fashion biz—think Givenchy, Donna Karan, and Zac Posen—but Karen Erickson, co-founder of the bauble brand, hasn’t forgotten about her Detroit roots. Returning to Coterie for her 27th year, this tiny designer’s joaillerie continues to pack a big punch!
BY DENA SILVER

What are you showing at Coterie, Karen?
We’ll be showing several new groups. Urban Jungle is a flower story with animal prints. Cosmic Code is our collaboration with Anna Sui: it’s a trip around the world, with Masai and Burmese elements. Lastly, Fashion Tribe is an ethnic-inspired group, for which we bought the beads from this guy, Mohammed, who supports his whole village in Africa.

Where is he located exactly?
I have no idea! I have his beeper number, I beep him, and he brings beads.

Wild! Going back a bit, what was the first jewelry piece you designed?
Our first pieces were crystals strung onto suede. We called it Erickson Beamon Crystal To Wear. That was officially my first line.

Did you have any formal training as a jewelry designer?
I studied at this crazy school, the College for Creative Studies in Michigan, and I majored in oil painting. The only class that I really didn’t excel in in was my jewelry class. I got A’s in everything except jewelry making. Isn’t that funny?

Yes! Why do you think that was?
I saw things differently than other people. I was never normal.

Did your Detroit upbringing have an influence on your designs?
One hundred percent! Detroit was the epicenter of rock ‘n’ roll.

What do you think about it now?
Well, things haven’t been going so great there, have they? Hopefully the city is going to crumble…and then come back to life.

Like a phoenix?
Exactly. Maybe the city had to get that bad for people to get it together. I believe that Detroit will rise again.

That’s the spirit! So, how familiar are you with the Coterie scene?
We’ve been doing Coterie since Coterie started!

How did you end up as a Coterie pioneer of sorts?
Someone told me that a new show was starting and that I needed to be a part of it. He told me it was going to change trade shows. Once I heard that, I jumped on it immediately. We were one of the original exhibitors.

How long ago was that?
I’m pretty bad with numbers; let’s just say it was a long time ago!

How has Coterie changed?
It’s gotten bigger and bigger, but the most amazing thing about it is that no matter how big it’s gotten, they’ve kept to their core concept of “fashion first.” That’s why I love showing there. I find Coterie to be so relevant.

Your designs are quite the statement pieces! What’s your take on delicate jewelry?
I collaborated with Donna Karan at one point, and we wanted to make pieces so intimate and personal you’d never take them off. We called it Sleeping Jewelry. The concept was that you’d sleep in jewelry and never take it off. It was a huge fad in the Nineties. I loved making little things, but I don’t like to be limited by size and structure. I’m really tiny; I’m only five feet tall. So I don’t want to be limited in my designs. I think big; I married the tallest guy I could find! My husband is six foot five.

Do you plan your outfits around your jewelry or vice versa?
Neither! I don’t plan out that stuff. I’m an Aquarius, so any kind of commitment scares me. Even committing to something the night before is too much planning ahead.

How important is family to your business?
It’s all family! My daughter Monique Erickson is my brand manager and muse. My other daughter, Mandie Erickson, runs Seventh House PR. And my husband Eric Erickson works with me on Erickson Beamon also.

Any other collaboration as of late?
We teamed up with Aerin Lauder last year, and the latest collection has already shipped. We had access to all of Estée Lauder’s jewelry…and that lady knew how to dress! There’s this one necklace that Aerin really wanted us to find inspiration in. So we had this huge, 24-karat gold necklace that was probably worth $300,000, traveling back and forth in taxis with an intern!

When can we expect to see round two of your ready-to-wear line?
Hopefully, if we move in time, we’ll be presenting another ready-to-wear collection in February of this year. We got hit really badly by hurricane Sandy. My whole office was under eight feet of water, and we lost everything: the sewing machines, the patterns, the fabrics. In December we’ll be taking an additional 4,000 square feet, and we’ll restore my workroom. We’re resilient.