From The Daily Brides: Wild And Wacky Marriage Laws! 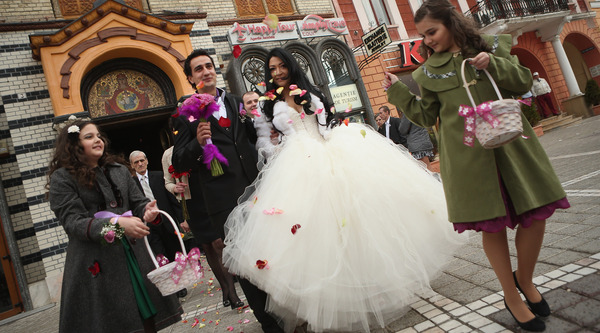 No matter how eccentric your great-great-aunt Hilda’s stories are or how cringe-inducing your dad’s dance moves can be, we guarantee that your wedding won’t be as weird as these marriage laws are, chicettes.

Delaware: Getting married on a dare is grounds for an annulment.

North Carolina: If a man and a woman who aren’t married go to a hotel or motel and register themselves as married, then according to state law, they are legally married.

South Carolina: By law, if a man promises to marry an unmarried woman, the marriage MUST take place.

Kentucky: No matter how much you want to, you’re not allowed to re-marry the same person in the Bluegrass state more than four times.

Montana: In the state of Montana, double-proxy weddings are allowed. That means both the bride and the groom can be M.I.A. at their own wedding ceremony!

Connecticut: It’s illegal to kiss in public on Sunday in Hartford.

Massachusetts: It’s illegal for the bride and groom to sleep au naturel in a rented room in Salem. Meanwhile, in Truro, a future groom must prove himself by hunting and killing either six blackbirds or three crows. When in Massachusetts…

Catching Up With Colin Cowie

At Last! The Oprah Winfrey Sweatshirt

Lindsay Ellingson's Next Walk Will Be Down...