From The Daily Brides: David Meister On His Mother-Of-The-Bride Biz 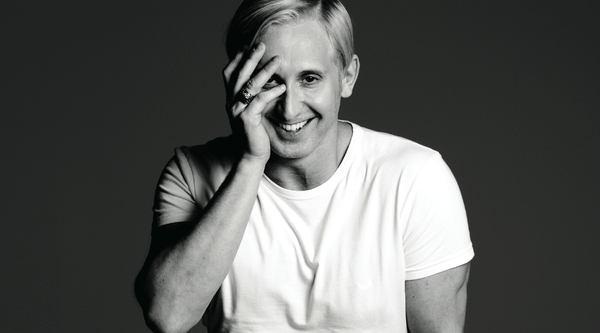 (NEW YORK) David Meister’s gorgeous gowns have graced nearly every red carpet in Tinseltown, but did you know he also has a booming mother of the bride business?
BY PAIGE REDDINGER

How did you get into the mother of the bride business?
A lot of mothers were buying our gowns because they weren’t interested in tea-length chiffon skirts and jackets. Mothers are in much better shape now! They want to be current and look younger. They’re shopping outside bridal stores to find that special dress.

What are they asking for?
One-shoulder dresses always do well, because a lot of women feel a little more secure in them compared to strapless dresses. Navy, champagne, and taupe are consistently popular. They make you look great without stealing the show. Rarely do you have a mother of the bride who’s looking for a bright color. They want to be clean, sophisticated, modern, and comfortable.

Do you ever run into a mother who wants to steal the show?
Yes, I had one woman who kept trying on this orange halter gown. And she looked great, but you know…

Do you watch bridal shows like Say Yes to the Dress?
Don’t tell anyone, but yes I do. I die! First of all, who takes nine people with them to shop? It makes for good TV, but some of the stuff that comes out of those mouths!

Let’s talk about bridesmaids dresses.
People will come in and buy four or five of the same dress. Obviously, you can go to the bridal stores, but I still think a lot of those dresses still scream bridesmaid. When people pick those horrible taffeta numbers, they’re like, “Oh, you can shorten it and wear it again!” But most girls leave it behind in the hotel room.

What color combos are you not so keen on?
Rust, for starters. The other combination I saw that really sent me over the edge was a baby blue dress, with big black sashes and pale pink flowers. I was like, “Yow!”

You dress women of all shapes and sizes. What’s the market like for plus-size eveningwear?
There isn’t that much out there, yet over 65 percent of women in this country are larger than a size 14. Women can be different sizes and still have taste. I dressed Queen Latifah, who is a larger woman, but she’s in shape. People think you’re flabby if you’re a bigger size, but some people are never going to be a size 4. It’s all about being in as good of shape as you can and knowing what works on you.

Tell us what it was like designing a dress for Valerie Bertinelli’s second wedding.
My publicist called and said Valerie wanted to have a meeting. This was three or four days before Christmas. She was like, “Well, we’re getting married!” I wanted it to be a little sexier, so we plunged the neckline and put a slit up the front. That dress was really put together in less than a week. She’s so easy and cool. It turned out perfect!

What was your wedding like?
My partner and I have been together for almost 20 years and we planned our wedding in two days. We decided to get married in our backyard in The Hills. The next day we went to the Sunset Tower and said, “We like this, and this, and this.” I would want to kill myself if I planned a wedding for a year. If you’re decisive, it’s very easy. People aren’t looking at whether the toilet paper in the bathroom is embossed with your initials.

Did you outfit Mama Meister?
My mom actually did not wear David Meister. It was so last minute!

Is she opinionated about your dresses?
She has good taste, so she likes almost all of them! There are certain things that she’ll tell me she doesn’t like. My nieces are the ones that will really let loose. They’re 21 and 24. They’re like, “The dress is great, but that color’s so ugly!”

Do you ever listen to their advice?
Sometimes they might have a point, but a lot of times I’m like, “Yea, yea, yea, you’re getting freebies. Smile!”

What did you and your partner wear?
I literally didn’t know what I was wearing until an hour before when I opened the door of my closet. I ended up wearing a Dolce & Gabbana suit. All the trim of the tuxedo was done in a printed rubber. And he wore a Dries van Noten tux. It was very low-key.

PLUS! David Meister’s Wedding Etiquette!
1. Don’t take off your shoes during the reception. The dance floor should not be mistaken for a pool deck.
2. Order off the registry. It exists for a reason!
3. Be prompt. You should never be the person sneaking into the back of the church.
4. Dress appropriately. This means no white and no excessive amounts of skin.
5. If you weren’t invited with a plus-one, don’t ask for one.
6. Don’t forget to silence your phone. No one wants to hear your trendy ringtone while the bride and groom are trying to say ‘I do.’
7. Be sure to congratulate the newlyweds, but don’t monopolize their time!
8. Have fun, but not too much of it. You don’t want to be that drunk guest doing the worm on the dance floor.

Bulgari’s “From Rome to Love” Comes To...

Neiman Marcus Has Your Ticket To Vanity...