From The Daily Brides: Bridesmaid Babylon 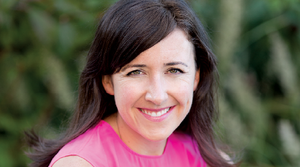 How did that parlay into a book deal?
I realized that weddings are these crazy emotional times, when everything seems so much more dramatic and fraught than it really is. Hanya Yanagihara, my brilliant friend and coworker—and author of the newly released The People In The Trees—came up with the idea of a series of books that would collect stories from particular groups of people. As I plotted bachelorette parties and bridal showers, I was only too happy to devise a way of making the topic of bridesmaids work for a book.

The book is out in April. What’s the process been like so far?
Last fall, I interviewed around 80 women; 60 stories made it into the book. Even if the bridesmaids were OK with sharing their stories, there are so many people in the story that we decided to keep them all anonymous.

A few colorful tales, please!
One bridesmaid I interviewed was so convinced that the groom was gay that her friend actually called off the wedding. I interviewed an ex-nun who was a bridesmaid in a fellow ex-nun’s wedding—she was getting married to an ex-priest. I also interviewed a Burning Man bridesmaid, who happened to wear the same outfit to the wedding as the bride: goggles and a tutu.

Did any bridesmaids strike out romantically while doing their duties?
There was a teenage bridesmaid who lost her virginity to the cocktail hour pianist at her brother’s wedding.

Did your ‘maids deal with any bridezillas?
One bride kicked a bridesmaid out of her wedding for missing the third bridal shower. Another bride sent her bridal party a series of Dutch masters paintings: that was their guiding palette when choosing their dresses. One bride told a bridesmaid that she needed to lose weight before her wedding. I guess that after interview-ing so many people, some of the duties just seem pretty normal to me
by now!

Did you seek out any specific subjects?
I really wanted a bridesmaid who’d been in a prison wedding. I searched forever to find the right person for that.

Any odd cultural tidbit you ran across?
I interviewed a Mormon bridesmaid and learned that once they’re married, they wear a garment under their clothes at all times: a thick-strapped tank top and shorts. That garment makes it really hard to choose bridesmaid dresses, because of the thick straps.

Thoughts on bridesmaid fashion?
Dresses aren’t as horrible as they used to be! The cliché of bridesmaid dresses being hideous is gone. Most people now are going with J. Crew as sort of the least annoying option. The dresses are very convenient to get and very normal. Also, more brides now are giving their bridesmaids a color palette and letting them choose the dress themselves. That looks good, if you do it right. And some people I interviewed were given a skirt to wear and they chose their own top.

Do bridesmaids ever actually re-wear their frocks after the intended occasion?
Basically, every single bride says that you’ll be able to wear the dress again. And it is never true. Every bridesmaid nods her head and agrees with the bride, but then throws the dress away. My first bridesmaid dress was strapless pink chiffon. I put it into my closet the second I got home from the wedding. I didn’t want to look at it! I knew I’d never wear it again.

What were some of the stranger getups?
One woman was a bridesmaid in the Nineties, and everything in the wedding was inspired by Princess Diana. They wore heavy silk blue dresses with little blue jackets—inspired by the color of Princess Diana’s engagement ring. One bridesmaid was in an Antebellum-inspired wedding in Long Island. The bridesmaids wore huge, poofy skirt, purple dresses, and a matching sunhats, inspired by Scarlett O’Hara.

How have your bridesmaid experiences made you feel about weddings?
Good! Although I’m definitely poorer from all of it. When it’s done right, being a bridesmaid is very special and meaningful.

Any pleasant surprises of bridesmaid-ing?
I’ve actually made new friends. For one bachelorette party last summer, we went to Montauk for the weekend. Some of the girls I met there are now my good friends!

Do you have your future wedding all mapped out after doing this book?
Writing the book made me realize I don’t want to have bridesmaids. I just don’t think I want a big wedding; it’s so stressful and so much work.

Where do you want to see the book sold?
I’d love for the book to be at Anthropologie.

Does having close female friends make for a better bridesmaid journey?
It definitely makes it more fun. I have a group of 12 girls that I lived in the same apartment complex with in college. Now, we live in L.A., Chicago, and New York and we’ve seen each other a lot in the past few years thanks to the bachelorette parties, showers, and weddings. We don’t have any engaged friends at the moment, so we might actually plan a trip!

PLUS! BRIDESMAIDING FOR DUMMIES
BE HONEST… “You can’t say yes to being a bridesmaid if you aren’t willing to spend hundreds of dollars. If you have to travel for the wedding, you’re probably looking at $1,500, not including the dress.”

…AND IF YOU’RE NOT, YOU MIGHT GET BOOTED. “I’ve interviewed a few people that were kicked out of weddings. They would’ve been so much better off if they’d just said no. Come up with an excuse if you have to!”

BUT BE VAGUE, SOMETIMES. “When brides ask for opinions, they don’t really want them. Just give a wishy-washy answer.”

GET THEE TO THE FITTING ROOM! “Always try on the dress a few times before the wedding. I know of a few instances of girls not fitting into their dresses on the day of the wedding.”

PICK AND CHOOSE WHEN TO PIPE UP. “Balance being a friend and just being quiet to not stress anyone out.”

BE BOSSY. “When a large group of girls is interacting, people get indecisive. Everyone wants someone to just make a decision.”