From The Daily Berlin: The World According to Christiane Arp 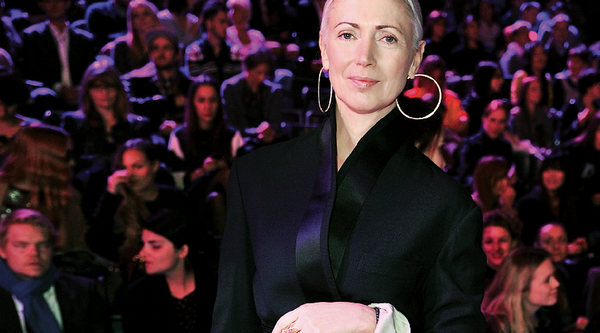 (BERLIN) Enough about Anna! In her decade-long reign atop the German media scene, Vogue editrix Christiane Arp has proven herself an able diplomat, engaging muse, and cerebral fashion soothsayer. The Daily sat down with BFW’s benign dictator to find out what fuels her—and the one thing that could make her abdicate. BY EDDIE ROCHE

How did you end up where you are today?
The lottery. [Laughs]

You’re funny!
Thanks. You can use that.

So you want me to tell you how I got here?
I studied fashion design in Hamburg, but before I went to university I started working as a trainee at a special-interest magazine, Nicole, that folded in 1988. I worked there for eight years. I knew I would never be a great fashion designer, but I could manage to become a fashion editor. After it closed, I was hired by Brigitte. After a couple of months they started Viva magazine, and I worked there and then I was hired by Amica as fashion director. After a couple of years, I left in 2000 and had an offer to join Stern and before I even started I got the offer for Vogue, but I’m from the north of Germany and a handshake is a contract so I couldn’t do it. I did Stern for a year and then joined Condé Nast as the deputy editor in chief of Vogue and then nearly 10 years ago, I became the editor.

Was Vogue your dream job?
It would have been on my secret wish list, yes. I don’t know whether I didn’t allow myself, or if I could just never imagine becoming the editor in chief of Vogue. After a decade it’s something that I think, ‘Hey, I managed 10 years! Can you believe it?’

Why do you think you’ve lasted so long?
It’s very important when you’re the EIC that you don’t lose your passion. I’m totally emotional, and I can get on everybody’s nerves with that. I wouldn’t stop with how I want it or what I think is right. That’s a good driver. I still don’t think I’ve done my best issue yet.

What would be in your best issue?
When I did the 30th anniversary and had the opportunity to work with legends like Bruce Weber, Peter Lindbergh and Karl [Lagerfeld], I thought that would maybe be my best issue. But there’s a saying that if it’s the best than you should stop. So I thought, ‘No, I can’t stop like this! I have to go on.’

How is German Vogue different from other Vogue editions?
The first years when I was here, I had my doubts whether I would ever be a good EIC. There was a time when I didn’t look at any other fashion magazines for six months to develop my own voice. When you look at other magazines you are so easily influenced. We look at pictures all the time and it does something to you when you see a picture that you like or that you don’t like. It interferes with your judgment for the next few moments, the next hour. You question yourself about whether you should do something like that as well. I wanted to do something that was German Vogue; that you can judge even if you don’t see the logo or read the writing. I wanted something that had its own identity. In our country we love fashion, but we are not a fashion country number one. We don’t live in Paris, New York, London or Milan. In our country design is really important, travel is really important, art is incredibly important.

What international versions of Vogue do you read?
I have them all in front of me. They are displayed in my office on a shelf like a bookstore. I look at all of them.

Have you ever thought about moving to America?
No. Everybody knows that I love New York and I have to go there all the time, but I think mother tongue is so important to express yourself. I can express myself best in German.

Do you consider yourself a visual editor or are you more of a wordsmith?
I love the right word with the right picture. Together they are the strongest couple. Of course I can see a picture and see that it’s a fantastic picture, but then when you read the headline and it fits perfectly, it makes the picture better. I see everything as I edit the magazine.

What kind of boss are you?
I want to be everybody’s darling, but I know that I’m not. At a certain point, you have to make the decision and sometimes you don’t like a fashion story that comes in. I would never run something that I don’t like. I sometimes make decisions that people don’t like, but I had a sign on my door that said, “You leave democracy and enter my monarchy.”

What’s a common misunderstanding about being a Vogue EIC?
In The September Issue, Anna [Wintour] said it best: It’s not about the red carpet, it’s really hard work. Red carpets and beautiful dresses are wonderful once in a while, but that’s not the first thing on our daily list that we have to do. People have a misunderstanding that we’re performing in a kind of fashion theatre, but we’re more backstage.

Who’s your Grace Coddington?
I have somebody who wants to be like Grace. It’s Nicola Knels. She read a very touching editor’s letter about Grace in the U.S. version of Vogue. She liked it so much that she said she wants to be my Grace.

Do you and Anna ever talk?
Not often. We won’t pick up the phone and just have a chat, but when we see each other, we talk. We have official and unofficial meetings where all the editors in chiefs sit together. That’s made the relationships better over the years. I’m sure you’ve seen the picture of all of us together in Tokyo. That was not done in PhotoShop. We were all there!

Is there any editor that you’d like to switch places for a day with?
There’s a magazine that I love, World of Interiors. I’d love to go to those offices for a week. I go through it page-by-page.

How did the Vogue Salon come about?
I came up with the idea. There was a certain time where we could see that Fashion Week in Berlin had developed in the right direction. We saw more and more young talents and more people were coming, but there was still so much press that was against Fashion Week in Berlin. I couldn’t just tell everybody that it gets better and better. I had to do something.

What do you think of the state of fashion right now?
We’re talking less and less about trends and more about the right clothes or the wrong clothes, which I like. Trend isn’t a real modern word. I like the idea that a woman chooses clothes that she really wants to have and not just wearing them because it’s a trend.

What would you like for Berlin Fashion Week?
I’d love to have more people come and look at our young talents. Sometimes there is a young talent out there who isn’t ready for their own collection but could be ready to be the assistant of a designer. Not everybody is an entrepreneur and our designers have to be these days.