From The Daily Berlin: Achtung Achtland! 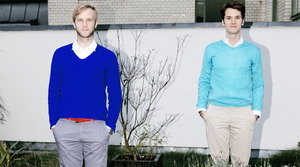 (BERLIN) Design duo Thomas Bentz and Oliver Lühr packed their bags two years ago from the U.K. and headed to Berlin to launch their own label. Today, they’ve got Christiane Arp as a mentor and are part of the Vogue Salon. How’d they make it so quickly? We had to ask!
BY EDDIE ROCHE

Are you guys a couple?
Oliver: Yes! We’ve been living together for five years and working together for a year-and-a-half on the brand.
Thomas: But we had been thinking about doing the brand for a very long time. The product was always there. We knew it was going to be about fashion, but we weren’t sure about the time frame. We always thought we’d attempt this much later in life. It came to a point where we knew we had to do it now.

So you moved to Berlin?
Thomas: We’d been living in London for a long time and both felt that we were getting a little too comfortable. We thought we needed to shake things up. Berlin seemed much less comfortable than London. It’s not as pretty. It’s very brutal, in a way, in its architecture and everything else. It was a very intuitive decision. It just came to us one Saturday.
Oliver: There’s so much less space in London. German society is always looking for something new and that’s the opposite of what we found living in London. The need for mental and physical space made us come to Berlin.

You’re probably saving a few bucks, too!
Thomas: Absolutely. In London every project is about the money. In Berlin the idea comes first and then the budget. That might be a good thing or it might be a bad thing, but for us it was very attractive.

You guys are clearly on a roll lately…
Thomas: Fingers crossed! We’re going to Paris this year for the first time to show the collection. We’ve been showing in Berlin, but we’ll be in a showroom there to talk to international buyers.

How did you get into the Vogue Salon?
Thomas: We had a presentation of our first collection in a hotel room at the Hotel De Rome and invited the Vogue team and the first person to come in was a fashion assistant. He liked the collection and then brought in his colleague who was a features writer. The next morning we were getting ready for a private appointment and Vogue called and said they were downstairs and wanted to come up with the fashion editor, who then came up with Christiane Arp. After she looked at the collection, she asked us to be a part of the Vogue Salon that day. It was very surreal.

Wow!
Oliver: We felt very privileged. Christiane liking our collection was very encouraging and quite a compliment. It still is.
Thomas: She’s been a very passionate supporter of all the people she’s mentoring through the Vogue Salon. It’s remarkable to see what that’s done for our reputation and quite frankly to our confidence.

Oliver, You’ve worked at Balenciaga and Chloé, but started out as an intern for Phillip Treacy…
Oliver:  That was fun! I did a millinery course before I started and I always wanted to learn a different craft and I thought millinery was the way to go. It was quite inspiring because at the time he was a total idol for me.

Did you get to work closely with him?
Oliver: Not at all. He worked on the couture hats and I worked on a smaller team. I don’t know how it works now, but our workroom was a cave of feathers. Pink, pheasant feathers, there was material everywhere. Selfridges in London actually did a mock up of the workshop at the time in their window. It really captured what it looked like. It was quite fun being surrounded by pink feathers.

Thomas, your background is a little different. You interned at Jil Sander in the PR department.
I did. That was almost 11 years ago. Jil had just left for the first time and Milan Vukmirovic was the designer. It was my only run in with fashion for a very long time. I went to university after that and got a political and business degree.

You studied Middle Eastern politics! Any common thread between that and fashion?
Thomas: They are both complicated. I enjoyed working in politics. There is a fundamental difference that I was craving for before fashion. When you do something like that you don’t get to produce something, you don’t get to hold on to a finished product in your hands. In fashion you can hold something and appreciate it. I like that about this process.

What are your exact roles?
Thomas: At the start of the collection when we hunt for fabrics, we collaborate very closely and then there comes a time at the beginning of the process where Oliver lays the ground work for the new collection. In the meantime, I take care of PR, marketing, and sales. Basically anything. We’re now at a point where we’re both doing each other’s work. You’ll find pieces in the collection where I didn’t have much input in and other pieces where you can definitely see my influence.
Olivier: It’s good for me as a creative to have somebody to bounce off ideas with who, shares the same taste and value of quality. The design work like the drawing is what I do, but the other decisions like the color, the fabric, the combinations of details is something we essentially do together.

Are you around each other 24/7?
Thomas: Yes! The only thing we don’t do together is drive to work. We live together and work together in the same room, but it’s turned out to be very healthy to have 10 minutes apart every morning. It sounds crazy, but it does make a difference to us.

Do you listen to music in the car?
Oliver: I listen to BBC World. It sounds really nerdy, but it’s fabulous! I sometimes can’t get out of my car.

Who are your inspirations?
Thomas: We like Erdem. Not only do we like his style, but all of his stuff is very recognizable. Proenza Schouler has done an amazing job. They represent a very down to earth, but sophisticated approach to design and how to run a business.
Oliver: I have friends who went to school with Erdem and he’s apparently one of the nicest guys in fashion which is good, because you need that in fashion, right?

As relative newbies in town, do you go clubbing?
Thomas: The only nightlife we participate in takes place in our studio. We’re slaves to our own work at the moment. That famous side of Berlin is lacking in our lives.
Oliver: We’re not so much slaves to the rhythm of Berlin, as slaves to fashion.

Do you cook?
Thomas: Absolutely! We rediscovered cooking in Berlin. We’re currently into things like roasting ducks and deer.

Who’s the better cook?
Oliver: Thomas! I’m very bad at it, but I love doing it. Thomas is very good at it, but he doesn’t love it. Working together is brilliant, but cooking together in the kitchen can be a bit tricky.
Thomas: It’s one of the few things we physically can’t do together!

ACHTLAND IS A STATE OF MIND…
Or maybe it’s a person? Or a place? Or a Celtic queen of some sort? Even they don’t sound so sure. Thomas explains …

“There was a mythical Celtic queen who was dissatisfied with the choice of men available to her so she choose to leave her earthly life behind and married a god to become a godess herself.  As for the name, there is a certain ambiguity to the name. It sounds German, but it’s not. It doesn’t really signify what it stands for. Is it a person? Is it a place? We like that there is a story to discover behind it. It possibly contradicts what the brand stands for.”

Shot of The Daily: Chrissy Teigen, John Legend, and Iman

Nicky Hilton on Summers in Europe, the...

Burberry to Document the Production of Ad...