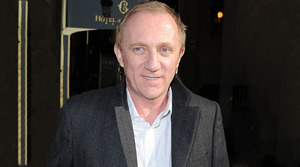 (NEW YORK) François-Henri Pinault made a surprise announcement at a press conference today that the powerhouse fashion company, PPR, would be changing its name to Kering, effective June 18th. This news comes roughly nine months after PPR also announced the name change of the Yves Saint Laurent brand to Saint Laurent in June 2012, per Hedi Slimane who was appointed creative director of the brand in March 2012. Why the big shift? Pinault is looking to rebrand the company as it nears its completion of becoming solely a luxury fashion and accessories business.

The company, whose name is an acronym for Pinault-Printemps-Redoute, sold off its Printemps retail operations in 2006 and is looking to unload La Redoute by the end of the year. As to why Pinault didn’t decide to at least keep the portion of the company’s title that was eponymous remains unknown. When the company was first listed on the stock market in 1988, it was registered as Pinault SA, back when the family delt in wood trading; Pinault-Printemps-Redoute was changed to PPR in 2005. The name Kering, he said, is a name that has its origins in the Brittany region of France: The “ker” signifying house and the “-ing” signifying “going” or “doing.” The name change is also accompanied by a new logo of an owl with a heart-shaped face and a motto of “empowering imagination.”

Vanity Fair Names The Most Stylish Characters On TV