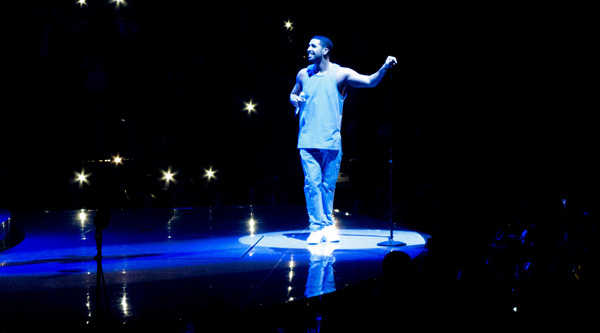 Drake has wisely asked Calvin Klein Collection to wardrobe his “Would You Like a Tour?” tour that kicked off earlier this month. The musician will be wearing custom and runway pieces on his 39-city North American tour designed by men’s creative director Italo Zucchelli. According to a press release by the brand, “the custom collection of bomber jackets, hoodies, t shirts, tanks, and pants were all designed to fit within three distinctive capsules. Drawing from the house’s legacy of iconic jeanswear, the first collection is based on head-to-toe denim. The second set was inspired by Mr. Zucchelli’s signature innovative, ultra-modern design sensibility, incorporating hi-tech fabrics, neon details, and reflective accents. The third group incorporates a photographic print from Mr. Zucchelli’s Spring 2014 collection. Depicting clouds and vivid blue skies, the design evokes a similar feel to the cover artwork for Drake’s latest album, Nothing Was the Same.” Zucchelli has previously worked on dressing musicians such as Justin Timberlake, Kanye West, and Jay-Z. The rapper will be performing in D.C. tomorrow with upcoming gigs in Atlanta, Dallas, and Miami.