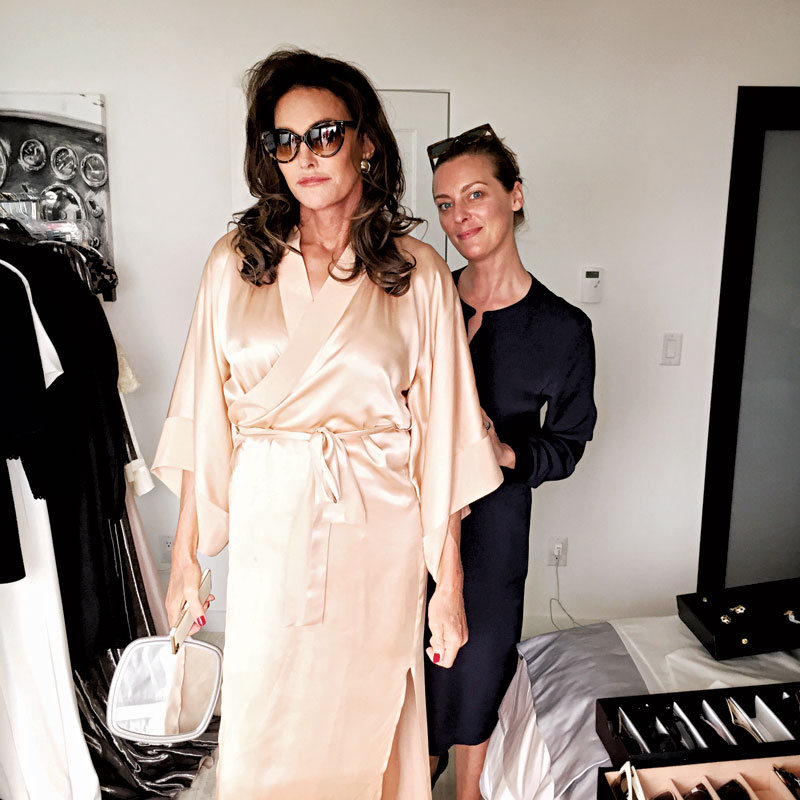 Vanity Fair features editor Jane Sarkin orchestrated Caitlyn Jenner’s debut on the magazine’s May cover and Jessica Diehl engineered her fashion transformation. Here, they explain how it all happened.

What was your reaction when you first heard about the story?
I immediately just thought it was great. I found it timely and very important. And what I thought was great about it was here’s this man, who’s incredibly successful in one way, a gold medal winner, pretty major in my book. And he comes to Vanity Fair to put this out into the world.
Are you good at keeping secrets?
Yes and no. It’s very difficult for me, especially if something’s positive. So if you’re my friend and you tell me, “Please don’t tell anyone,” I can keep that secret, that’s no problem. But something inspiring and something brilliant? I have to say that was really difficult.
How many months did you have to keep quiet?
March until June, which is a long time. Another editor in chief told me, “I heard you’re doing this.” I had to bald-face lie to him.
What kind of woman were you creating?
When I first met Caitlyn, a month before we shot her, I went to her house to get a sense. I have nothing against the Kardashians. I think they’re fabulous and amazing. They take fashion to the next level. But it was really important for me to figure out that Bruce-slash-Caitlyn is someone who grew up in the ’50s, ’60s, and ’70s. Her thought process around style was much more American. [Vogue’s fashion director] Tonne Goodman would have loved it. She would have been Caitlyn’s style icon. I thought about Lauren Bacall or Lauren Hutton. It ain’t no Doris Day. Caitlyn’s quite fearless.
Who else did you work with on this besides Graydon, Annie Leibovitz, and Jane?
[Fashion market director] Michael Carl knew. I knew he wasn’t going to talk. My assistant, Ryan Young, also knew. The three of us went shopping, and it was hysterical. I’ve never had more fun in my life.
Why?
It’s really bizarre going to Saks, Bergdorf’s, and Barneys and trying to find certain sizes, which are never on the floor. There were three of us who don’t look that size and I was shopping, supposedly, for my “great-aunt” who was receiving an award. We weren’t sure if some looks were going to fit, so Ryan would go in the dressing room and try them on. He was really into it! The most amazing part was that nobody in the department questioned it. Even when I said she has a size 13 foot, wide. They all knew I was lying, but they knew enough to not ask. On the other hand, I thought, “What do you do if this is your life? What do you do if you’re transgender and you want to buy women’s clothing?” Going into department stores is not only daunting for a woman who isn’t a size zero, but there’s no escaping from the eyes of the sales staff. The coolest thing about New York is that nobody batted an eye.
Did you have a code name for Caitlyn?
Barbra Streisand. I thought it was the same generation. I thought she was really tall, maybe because I saw Yentl, and she’s not.
What was the shoot like for you?
I don’t really get super emotional about stuff, except this one. What was really stressful was the idea of building from scratch. Her wardrobe a month before the shoot was minimal, minimal, minimal. It was not my taste or even hers. It was more what was available. How can we have a couple things that make the wardrobe real? Have a bit of Max Mara, Tom Ford, a Balmain blazer. Have a bit of fashion and create a cohesiveness in tune with who this person is.
What did you think of the reaction to the story when it hit the web that Monday?
I was thrilled for her because the most important thing to her was for it to be received in an open way and be part of the dialogue. What was so brilliant was that it was a monthly that broke news in a manner that hadn’t been done in quite some time. Not many publications can do that. Vanity Fair has the trust of people to tell their story and to do that at their own pace.
Have you kept in touch with Caitlyn?
Yes! We were texting in the morning when the issue came out. She couldn’t believe it. She really was sequestered in her house. The reveal of Caitlyn wasn’t meant to be in the hands of the paparazzi but in a controlled and dignified manner. It was her coming-out party!