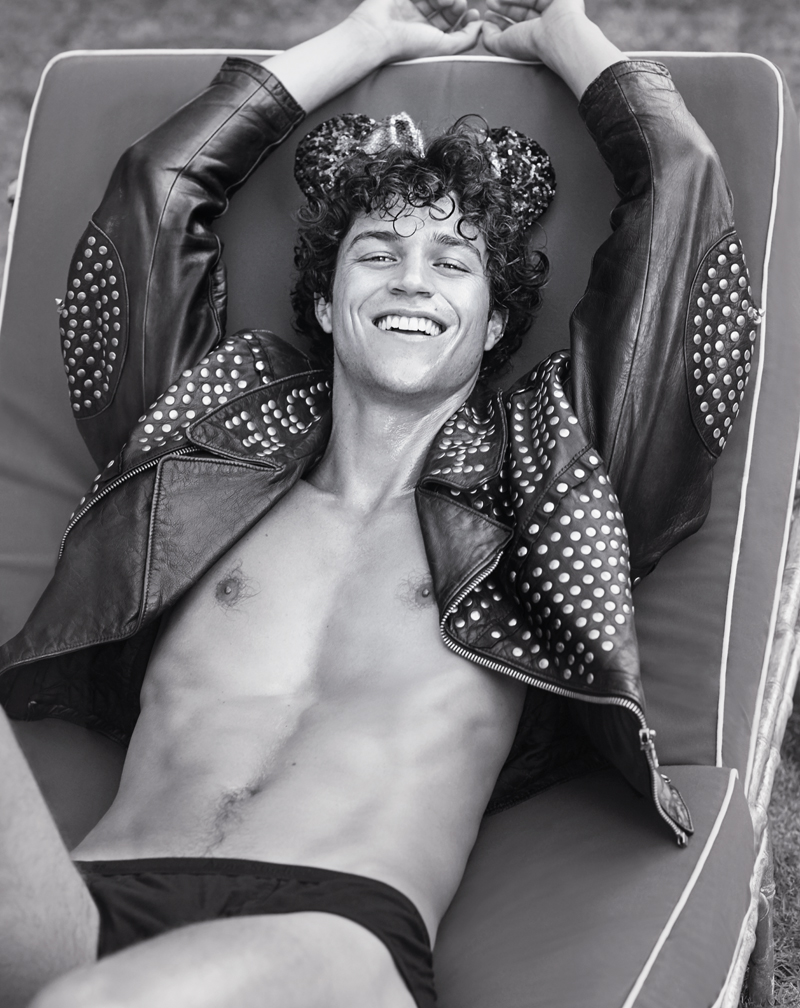 Following a sensational debut on the top runways of New York, Milan, and Paris, Miles McMillan has emerged as both an object of fan fanaticism and an advertising powerhouse. Now, as a face of Tommy Hilfiger and Just Cavalli, the 27-year-old California native is hotter than ever.

How did you end up in New York?
I’m from La Jolla, California, where I lived for 18 years. I moved to New York to study fine art and painting at NYU.

Did you model as a child?
No. I was approached once [by a model scout] when I was a kid, but I didn’t want to do it. Then a photographer approached me when I was a senior in college and asked me if I wanted to shoot, and I went for it. It was for a catalog for Urban Outfitters. I didn’t have an agent, and they said they’d pay me a certain amount, but I said, “No! Pay me this much,” and I got more.

How much more, exactly?
$700. I continued to work for Urban Outfitters for the next year, and I found out that my rate was pretty high. I didn’t do bad for myself. I was about to graduate and figuring out what I wanted to do, so it was a really good thing. I thought modeling was a good way to make money and serve my art career, and it took off.

How much time do you get to spend on your art these days?
In the past, not a lot, and now, it’s a lot more. I just got a place upstate, and I go up there when I can. I’ve been working nonstop. Now I’m balancing that work with modeling. I like to be creative every day, in whatever I do. It’s been an interesting time, becoming who I want to be.

What have been some of your favorite moments over the past year?
This year has had a lot of big transitions. I cut my hair and I feel more mature. Tommy Hilfiger has always been there and supportive. I’ve been friends with Sebastian [Faena] for a really long time, and he’s always seen something in me. He wanted to show the world what he sees in me, which I really appreciate and love about him. We have a really great collaborative energy together. In February, I came over to IMG Models, which I’m super excited about. They say when you are 27, there’s an astrological shift, so I’ve definitely been feeling that, and it’s taking me to the next level of what I want to do. I’m being asked questions that I wouldn’t necessarily ask myself. I’m out of my comfort zone.

Have you ever won anything before?
I won a few first-place fairs for painting when I was a kid, and maybe some track medals.

Where did you and Sebastian [Faena] meet?
We met through a friend when I was 21. I was a completely different person. I’d watch his dog when he was out of town, because I loved her and I’d take care of her. I can’t even remember our first job together.

Any favorite shoots you’ve done together?
The work we did for The Daily Summer really captured how I want to be seen.

Do you have any interest in acting?
Sebastian and I went to Buenos Aires this year, and we spent a week shooting a short film. It has very few lines, which is up my alley. Luckily, I played a nervous person, so I could channel that into the role. I’ve never really had an interest in acting, but I didn’t have an interest in modeling, either.

How do you spend your downtime?
I can’t watch reality TV anymore. I can’t stand it. It makes me so angry to watch. I’ve recently caught up with The Night Of on HBO, which is great. I’ve been trying to fill my time with painting and being outdoors. TV brings you inside. We have three dogs—Noah, Skunk, and Rocco, our new guy, who is a mix between a Great Dane and a lab.

Do they wake you up every morning?
I wake up at 8 every day—before them.

Why the name Skunk?
I adopted him through [boyfriend] Zach [Quinto], so the name was inherited.

Where did you and Zach meet?
At a Carine Roitfeld party after a CFDA event over three years ago.

Will Zach be at the Fashion Media Awards?
This is really depressing, but he’ll be in Canada working, so I’m going solo.

He’s been promoting Star Trek all summer. What character would you play if you were in the film?
I’d have to be an alien! I’m not sure why. I could also shave my hair off and be the bald man [Captain Jean-Luc Picard].

What’s your fitness routine?
I don’t go to gyms. I do yoga classes and club bell, which is a weighted iron bat.

Do you say, “I’m just being Miley”?
[Laughs] I don’t! Sebastian calls me Thomas. He’s the only other one who has a nickname for me.

Why?
It’s my middle name.

What were you up to this past summer?
I was home in California for part of the summer. My sister had a baby boy, who is my first nephew. I was there a week before he was born and two weeks after. It was an intense and special experience. I love him so much.

You have a growing following on Instagram. Do you read the comments?
Sometimes. When I put something up on Hillary Clinton, it was very polarizing. People were very angry and said some really rude things, but it didn’t bother me. They can be mean to me, but I don’t like seeing people be mean to others.

What’s your sign?
I’m a Cancer with Leo rising.

Do you relate to the characteristics of your sign?
I’m truly a Cancer! A hard outer shell, and I’m gooey on the inside.