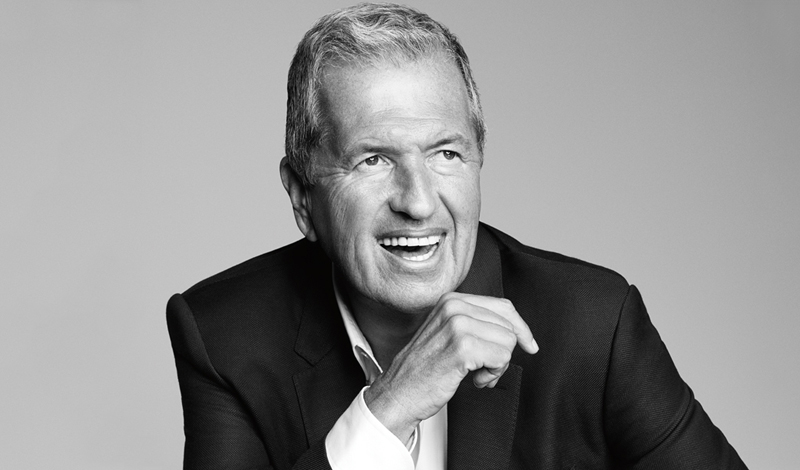 He’s the most prolific fashion photographer working today—and one of the industry’s most game-changing creatives. No wonder Mario Testino is the mastermind behind a rapidly expanding empire.

Do you like being on the other side of the camera?
I embraced it a long time ago, because back in the ’90s, when the girls like Kate, Naomi, Claudia, Christy, and Linda were covered in every single way possible, they started looking around at who could talk about them. Most photographers didn’t want to talk, but I speak five languages and I’m quite chatty. It’s my Latin-American nature! I started getting interviewed by TV channels after the shows, and I realized our business was changing—being in front of the camera was part of it. You can’t avoid it.

You now have a full service creative agency, MARIOTESTINO+. How did that come about?
It was reactive, rather than proactive. Dolce & Gabbana asked me to do [the perfume campaign] Light Blue and they wanted me to look after the whole thing. They explained the feel of the perfume, and I would film, photograph it, and deliver the project fully laid-out. The agency came from that moment. The clients were surprised by the ability to talk directly to the photographer, rather than going through an advertising agency. Then Burberry took their art direction in-house and they wanted to do it with me directly. Next came Michael Kors and Lancôme. Sue Nabi pushed me to make my agency more solid. She wanted me to come up with the concepts, do the layouts. The agency was an organic move born out of the demand from my clients to provide these extra services.

How many people are working for you now?
Almost 100! In addition to the agency, I started [MATE – Museo Mario Testino] in Peru, and it involves a lot of people. My work lives there as a platform for other artists to participate in. We also promote local artists and offer courses, and we’ve helped flood victims.

You recently opened a New York office…
America is the most understanding place for business and change. My CEO [Suki Larson] is American, and she’s very pro-America. Fashion photography at the base is about art and commerce. I always like the idea of being quite clear about what I do: We make beautiful images to sell products. I’m a real fashion photographer; I’m into clothes, hair, and makeup. America seems to be the place where things happen. In today’s world, where everything has changed platforms, it’s important to be present and connected.

You’re a creative machine. Have you ever had a rut?
Françoise Rosenthiel, the wife of Christian Lacroix, told me years ago that when somebody has ideas, they always have ideas. Today, I was telling my team that they shouldn’t talk to me about jobs that haven’t been confirmed. The moment you tell me something, I’m thinking about it. I’m 62, and most people used to retire around this age, but I’m working more than ever. I’ve always been obsessed by youth; it’s fabulous. But at the moment, I’m really obsessed by knowledge. Something happens after 30 years of experience—if your mind is still fresh, you can put it to work and do amazing things. I’m a big admirer of Karl Lagerfeld, who has been able to take everything to another level. Years of experience, curiosity, and professionalism—it’s a fantastic combo.

You shot some fabulous models for the September cover of British Vogue. How did that come together?
I worked with Alex [Shulman] for 25 years, and she wanted to document what she had done and where her eye was still going. I once did a story on supermodels, and I brought in Edie Campbell. She was 15 or 16 at the time, and everyone wanted to know why I wanted her in it. I said, “She will be the next one!” I like that idea of putting these girls together, because they are part of the life of the magazine and my life. Stella Tennant married my assistant. I’m godfather to her daughter. Kate Moss has been my muse and my partner. We’ve shared so much over the past 25 years. Edie’s mother is a friend of mine. Jean Campbell’s parents are my friends, too. Nora Attal is the new find! I quite like this idea of these girls who are intertwined in our lives.

Now that Alex has left the magazine, will you still shoot for it?
I don’t know, really. It’s early days. They’ve just taken off. The natural reaction of anybody who takes on a new thing is to get rid of everything that’s been there in order to make your point and get your image and ideas across. I love Edward [Enninful]. I’ve known him forever, and we haven’t worked that much together. But the things we have done together, I’ve really enjoyed doing.

We love your new Stuart Weitzman campaign with Gigi Hadid wearing a short wig.
Sometimes, you have to shake it up. I’ve been with the brand for many seasons, and they know that I am only interested in its success—it’s not about me. I’m happy to say that it created an explosion in the press.

How long have you been collaborating with Michael Kors?
Fourteen years. He has a very precise idea of what he likes and who his woman is. I only see him through those eyes; I never sway. I like the idea that you can take the logo off a photograph, and you [still] know that the pictures are theirs. Advertising and marketing are about finding the DNA of a company, and being consistent and precise about that.

What’s the story with your Instagram towel series?
I’ve always enjoyed taking people’s clothes off! I can’t show them naked, because it’s not permitted, but I love the idea of celebrating bodies. Some have been born with a good one; others have maintained it. I don’t have a good body myself, so I’m always in awe of others. When I find them, I always like to document and share them. I was so moved when I was talking to Kendall [Jenner] about The Daily’s cover picture. I told her I wanted to push it, and she said, “Do you mean naked?” When I showed up, she said, “I should wear a towel, because that’s your thing!” Something I created out of nothing became such a strong brand.

Do you have a favorite brand of towel?
I don’t! I’m dying to do my own towels. I do have a particular taste.

What’s so special about Kendall?
She is now. She’s beautiful and has an amazing body; those are elements that attract us to models, but there’s something about her and what she represents that has changed the way we look at things today. It’s pop! In the world before, we were filled with rules and regulations of what was good, what wasn’t good, what was chic, what wasn’t chic. In came this family, and through reality TV, they shook up the way everybody sees everything. Before they were put in Vogue, they weren’t considered the height of chic or glamour or beauty. I like people that believe in what they believe in and go for it.

Anna Wintour got a lot of heat when she put Kim Kardashian on the cover of Vogue.
We are journalists, as well as creators of an aesthetic product. We document what’s happening in the world. If Anna hadn’t done it, Vogue wouldn’t be relevant. They’d be staying with principles that are shifting constantly, instead of being the ones who create the shifts.

How would you describe yourself on a set?
I think that people forget that every second of the day is our life. I want to enjoy my life—every second of it, if I can.

You work constantly. How many airline miles have you accrued this year?
I’m on a plane every three or four days. I love it. British Airways is my favorite airline, but I fly on them all.

What do you do for fun?
The funny thing is that fun is my work. I have a great time all day long. I was a huge party animal. Beyond! I love dancing, and partying, and hanging out with people, and going crazy. But not anymore. My life has shifted in the past two years. My mother died a year ago, and at that moment, I stopped drinking. It was like a reaction. I identified that we are in a time of huge change in our industry and our world, and I want to be clear at this particular moment. I want to put every single element of my experience into one piece, and use it all in the next stage. For a long time, I was a photographer. Today, there are too many things I can do, and I want to make sure that I do them all. I’m finding the day much more exciting than the night. We spent 40 years of our life trashing our bodies, and then all of a sudden, we’re trying to get it all back into shape and hang onto it. Hopefully, I’m not too late.

How would you like to be remembered?
I’m not worried about that. It’s not that I don’t want to be remembered, but it’s about what I did when I was here. If I can help just a little bit, that’s what I’m concerned with now.