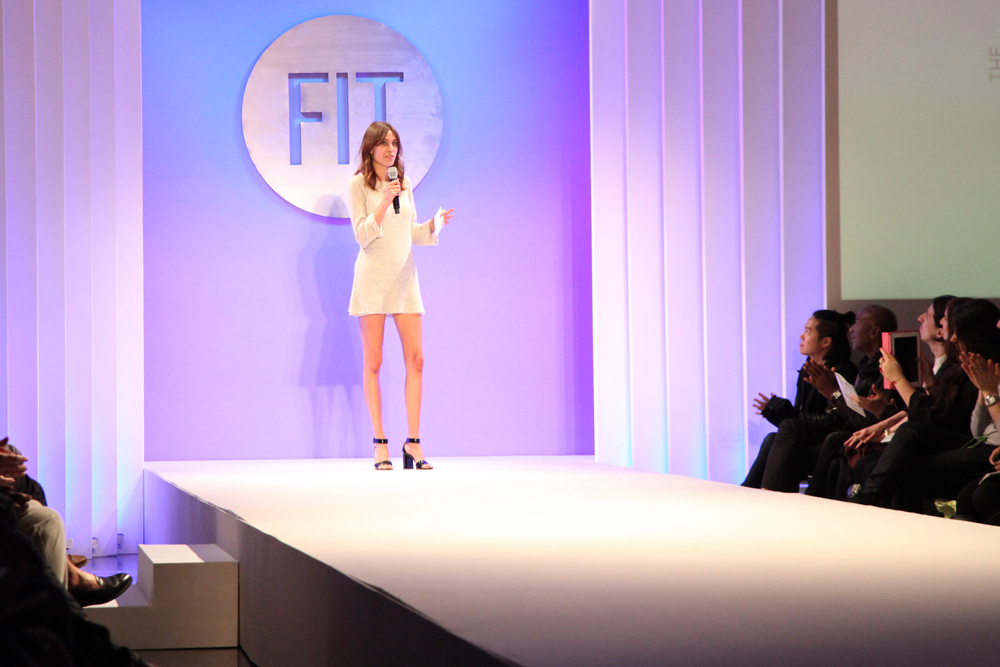 Despite the best efforts of reality TV producers, the place to find “The Future of Fashion” is at FIT’s annual runway show on campus. Last night, with the help of longtime FIT friend Calvin Klein Inc., they showed the best of the best from the class of 2014 in front of a front row that included alum Calvin Klein himself,Francisco Costa, Rebecca Minkoff, BryanBoy, and welcomed Alexa Chung as the host. We caught up Chung backstage after the show to get her review! Let’s get to it…

Why did you want to lend your name to this?
I work with the British Fashion Council in London and it’s something I enjoy doing. In a selfish way, I want to be the first to discover new talent. In England it’s Fashion East and we try to spot new talent and wear it as much as possible.

Do you have a relationship with FIT?
No! I didn’t even know they knew who I was. To be honest, this was just an ego trip that an actual institution that’s famed for it’s fashion prowess might even consider me getting in there.

Were there any designers that stood out to you?
I didn’t manage to follow the pamphlet so I can’t tell you a name, but the girl who won the critic’s choice was pretty incredible.

And the kids who walk are pretty cute…
The kids were heartbreaking. The one with the glasses at the end had such a unique swagger. It’s [the future] Christy, Naomi, etc…

Most of the guests tonight got a copy of your book. Why is it called It?
It was a joke in a bar that went horribly wrong or right, depending on the way you put it. I’m called an ‘It’ girl a lot in the press, but it’s not something I necessarily associate myself with. Since I’ve always said, ‘I’m not an ‘It’ girl, blah, blah, blah’ I thought it would be ironic and funny to call it ‘It’. I very quickly tired of that gag. It’s not got the legs I thought it might have. Now people think I’m saying I’m the ‘It’ girl, which I absolutely wasn’t saying.

Thank you for clarifying that!
[Publicist chimes in: “There’s a scoop!”]