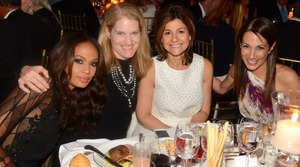 (NEW YORK) Last night, quite the fashion klatch gathered at Cipriani’s 42nd Street location for FIT’s annual gala fundraiser. Guests dined on lobster salad, risotto, and lamb as artist Jennifer Steinkamp‘s flowery and dreamlike video installation, Orbit Art Work, served as the backdrop on the big screens. Steinkamp’s art was said to be very much a part of honoree Stefano Tonchi‘s vision, who’s well known to be a supporter of the arts not only in W, but also in his personal life.

Tonchi was presented with his award by actress Jessica Chastain, who first met the editor-in-chief when she was asked to grace the cover of W in September of 2009. It was her very first cover. “I don’t recall much of Stefano from that day other than that as always, he was beautifully dressed, in a suit, on a weekend [laughs],” said Chastain. “But over the next two years we kept in touch and I was so thrilled when he asked me to be a part of this evening.” When Tonchi took the stage to accept the award, he told the audience, “My first thought when they approached me about receiving this award was, ‘Am I so old that I am to be honored for my work?’ After going through a mid-life crisis today I’m honored to be receiving this award and I thank everyone at FIT.” He went on to add that he hoped his daughters would have the privilege of attending the school should they have the talent. Fingers crossed his girls love fashion!

Also honored during the eve: George Kaufman, chairman of the Kaufman Organization, who was presented by longtime friend and crooner, Tony Bennett, as well as Kay Krill, president and chief executive officer of Ann Inc., who was honored by supermod Karolina Kurkova. Upon accepting her award, Krill announced that Ann Inc. has committed to endow a full year scholarship that will be rewarded annually on an ongoing basis for students with a passion for designing womenswear.

Former FIT student and current fashion blogger (check her work out at The Style Socialite) Alina Fayer made for a compelling tablemate, telling us: “I started at FIT in 2006 and I was one of the kids that the Gala is raising money for. I was desparate to work for my dream, but I wouldn’t have been able to do it without the amazing support of the scholarships that helped me to get to where I am today. I want to eventually give back in my own way someday.” A side of inspiration with your appetizers, perhaps?

The Daily Summer: It's A (Massive) Hit!