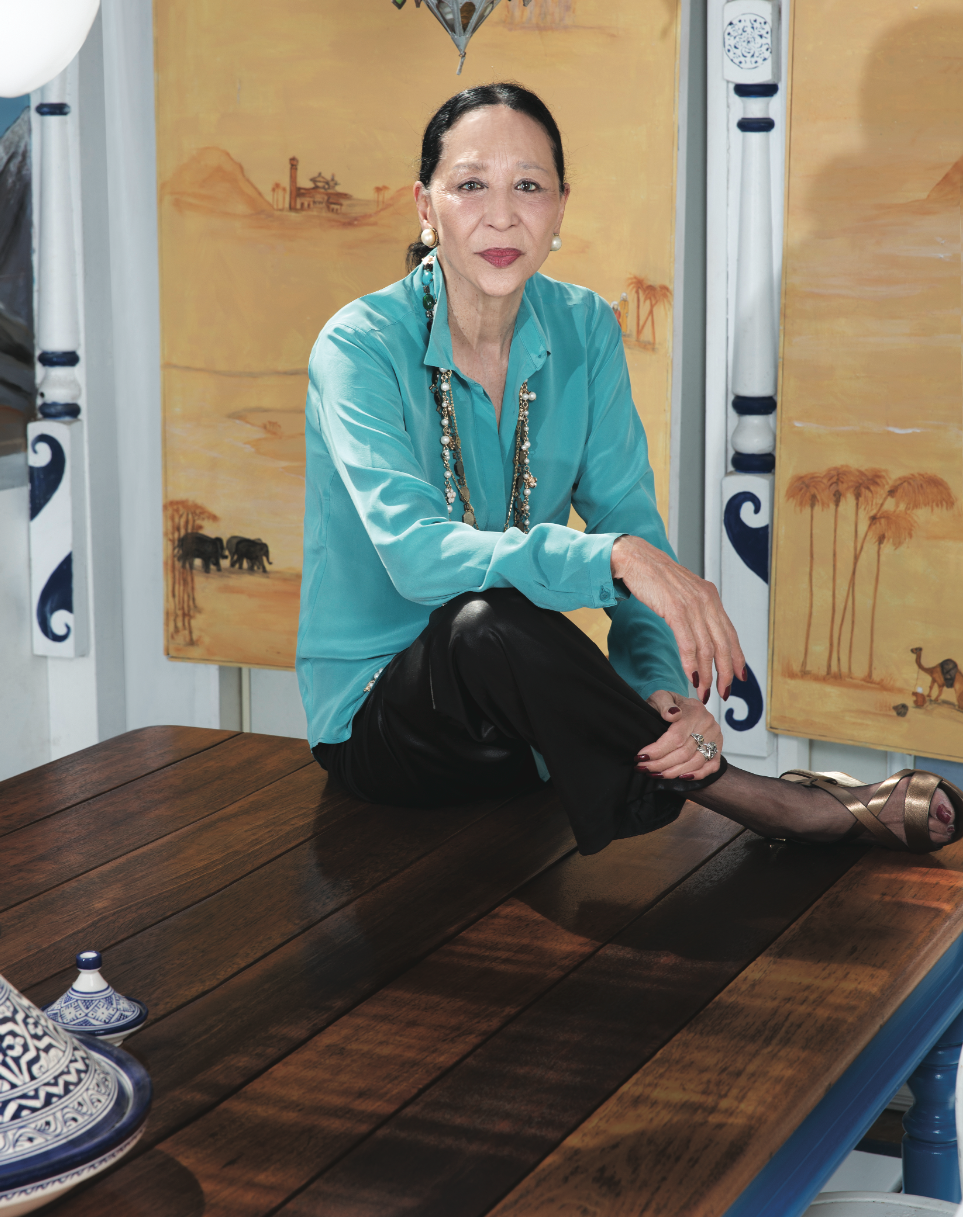 Model China Machado was a muse for Richard Avedon and the first non-Caucasian cover model for Harper’s Bazaar. Now 84, she still lands the occasional modeling gig, but is happiest laughing with friends in her rose garden. The Daily Summer swung by her year-round Sag Harbor abode to take a leisurely stroll down memory lane.
BY EDDIE ROCHE

How long have you been coming out to the Hamptons?
Since 1965. I rented for several years, and then bought in 1971—the Watermill house. It was five-and-a-half acres with a 1776 house. I bought nine properties out here!

What about this house?
This was a mess when I first bought it twenty years ago. It had tiny windows, a sliding door, and that was it. It was a shack. We remodeled it over the years. What could I do wrong with it? It was so awful to begin with.

Why did you decide to settle in Sag Harbor?
It’s such a beautiful little town. All the Europeans love it more than any place else because it has character. There are so many landmarked and beautiful houses.

After you retired from fashion, you started an unusual project in the area. What was it?
I had a country store here called Country Bazaar. We sold gourmet food, children’s clothes, toys, and gifts. It was fun for a while, but you couldn’t get anybody to work! It ruined my social life.

Did the customers know who you were?
Well, I didn’t advertise it. I was cutting ham and stuff like that. Jean Vanderbilt came in once, who I hadn’t seen in years. We looked at each other and we sort of began our friendship again.

You host an event at your house every year called the ‘Party of the Roses.’ How did it start?
It started because everybody said, ‘Oh my god you have such beautiful roses. Can I come and see them?’ Last year, we had 110 people, and I cooked everything. We build a dance floor that becomes a stage and have all of our friends that can sing or dance do something. It’s much more fun to see someone you know performing than some unknown.

How did you get started in the modeling business?
It’s an unbelievable story of me leaving to South America, running away with a bullfighter, and then going to Paris, and being discovered by Balenciaga’s woman who said, ‘Do you want to be a model?’ I said, ‘What’s a model?’ Then I became Givenchy’s top model and blah, blah, blah, and so on.

You and Richard Avedon are so synonymous with each other. When did you two meet?
Dick Avedon was the first person to photograph me. Because it was Dick, and because I was the first non-Caucasian in Bazaar, it made a big splash. Everyone knew me all of a sudden.

Did Avedon ever come out here?
He had a house in Montauk and very often he’d stop by, have lunch with us, and on his way back have dinner. I had a very close friendship with Dick for 50 years.

What did he teach you?
Dick had this magic. He just took the picture when he thought it was right. He already had the picture in his head before he took it. He always said to me that I brought something completely different to a picture. That’s why he photographed me so much. He made you feel comfortable in front of a camera and made you feel beautiful, so you’d do anything—turn your head, put your nose there, whatever it was, you did it. He gave you a kind of confidence.

Everybody’s a photographer now. Do you ever take selfies?
I can’t stand to be photographed. Why the hell am I going to be photographed when I was already photographed by the greatest there ever was? There are all these stupid pictures of people who go on holiday or at parties—suddenly someone’s taking your picture in the middle of a conversation, or they want you to pose with them. You do it, but God, such a bore!

We saw quite a few paintings inside. Are any of them yours?
Everything. The day after Dick died I started painting. I felt so upset. I wanted to think of something else besides the sadness of his passing. It helped me get through it, because I really felt bad that he was gone.

How would you describe the décor of the house?
Eclectic, to say the least.

How many years have you and your husband Riccardo Rosa [retired furniture exporter] been married now?
Ten years, but we’ve been together for 36 years. We wanted to be sure.

You’ve used that joke before, but it’s a good one!
It’s true! I didn’t know if I wanted to get married again, but he was committed the minute he met me. We like the same things. We like the same people. We love to travel. We both like to cook. I can’t fight with him.

You’re in amazing shape. Any health tips?
I’ve never had a facelift. I don’t use any expensive creams. I use cold cream to take off my makeup, and I wash my face with soap. That’s about it.

Do you still have a glass of wine now and then?
I drink vodka only, unless the wine is fantastic.

Vodka on the rocks?
Hey, if you’re going to do it…[laughs]

You laugh a lot.
I do. My mother’s family was always laughing. There were five sisters and one sister would start laughing and then another would start laughing, without even knowing why, and then all five sisters would be hysterically laughing. What we call it is fou rire, which is a French word for crazy laughter. That sort of releases you. My daughter and I inherited it. I can get into laughter like you wouldn’t believe. It’s just impossible! I just think laughter brings everyone together. If you can make someone laugh it’s great. Everything else becomes secondary.