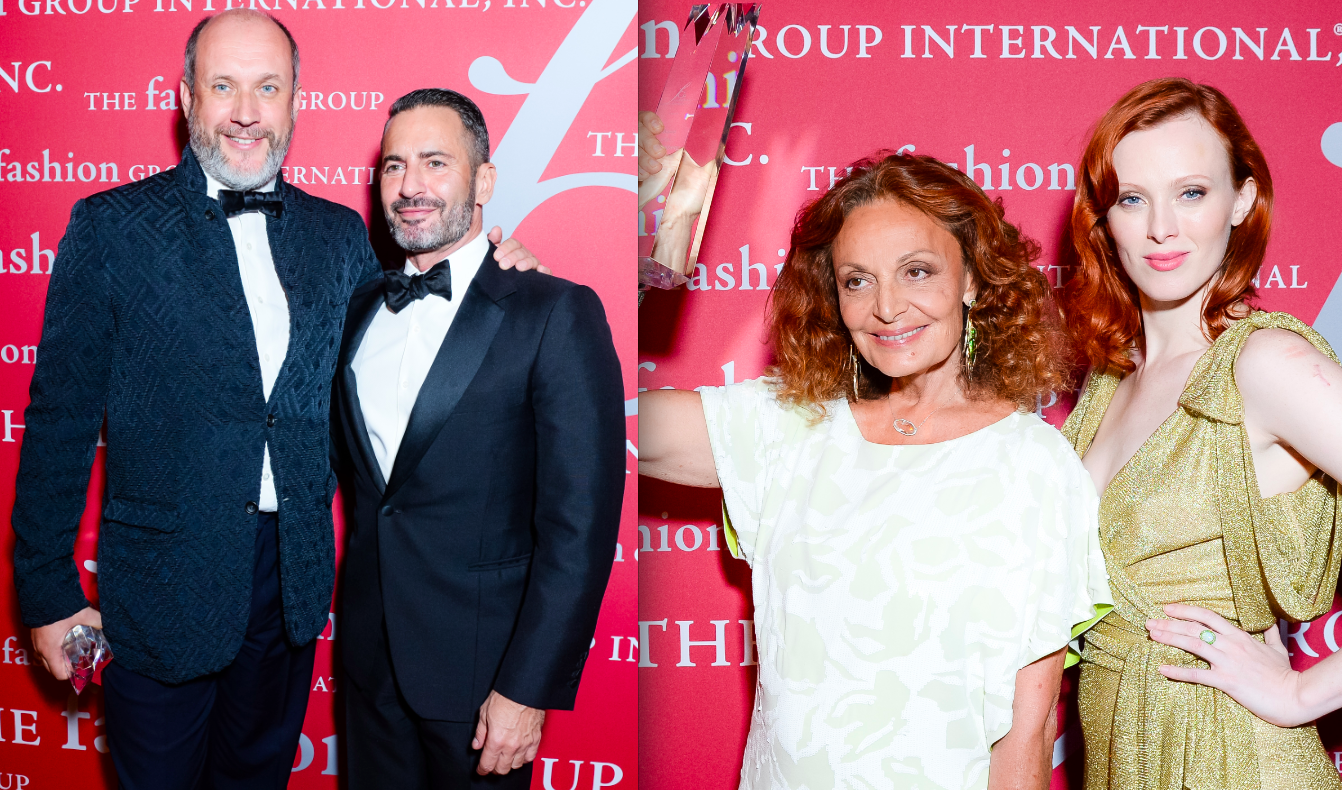 The topic on everybody’s lips remained this week’s loss of Oscar de la Renta, who was remembered by FGI president Margaret Hayes at the top of the show. “He’s one of only three Americans ever designated as a couturier,” Hayes told a crowd that included Grace Coddington, Marc Jacobs, Hilary Rhoda, Viktor & Rolf, Deborah Harry, Mary J. Blige, Chrissy Teigen, Zanna Roberts Rassi, and Hamish Bowles. “Oscar’s accomplishments were, of course, extraordinary, but more telling than his legacy as a design icon is a life well lived. A life of purpose, integrity, dignity, and grace. A life lived as a gentleman in the true and absolute sense of the word. He was a mentor and a friend to many in this room. A designer who truly made women feel their very best.”

Wes Gordon, who just arrived from a trip to Los Angeles with the CFDA Vogue/Fashion Fund, also had a connection with the legendary designer. “I got to intern with him for two summers and he came to my first presentation, which was amazing,” Gordon told us. “Everybody says it and it’s so true, but he truly was the ultimate gentleman and a class act.” Simon Doonan officially opened the show shortly after 9 p.m. with a random story about dressing up as the Queen of England, before introducing Isabella Rossellini who was there to present to Schmid. Highlights of the evening included Andrew Bolton presenting Alexander McQueen designer Burton with her award. The reclusive designer, who wasn’t doing any interviews, gave a 15-second speech where she thanked “Lee for all those amazing years I spent working for him.” Recent groom Altuzarra, who four years ago was awarded their Rising Star honor, thanked “my husband of five days for supporting me, always being there for me, and loving me.”

A particularly jolly Marc Jacobs (who stuck with the evening’s black tie dress code) presented his former Louis Vuitton colleague Copping with his Fashion Star Award. After paying homage to Oscar in his speech, we caught Copping for a moment to congratulate him. “It’s a beautiful way to end working for Nina Ricci,” Copping told us. “It’s great to be here in New York, the city where I am going to live. I feel there’s a lot of love and that I’ll be well supported.” When’s he officially moving to the Big Apple? “Next week! We have a nice apartment in the West Village. I’ll come around for a cup of sugar!” He also spoke about the death of the man who would have been his mentor in his new role. “It’s been very sad,” Copping said. “Obviously we knew Oscar was in ill health, but I was really hoping to have more time working together with him.”

Karen Elson presented DvF with the night’s highest achievement, the Superstar honor, and asked the crowd to get on their feet to congratulate her. “I guess this is what happens when you get older! People get up for you!” DvF quipped. Fittingly, the evening ended with DvF sharing memories about her good friend Oscar. “Every Saturday night, he would come to my house to have Saturday night chicken. We would watch a movie and I would be next to him on the sofa. Two Saturdays ago, it was getting harder and harder for him to do it. He had driven from Connecticut to come to the hospital here for a blood transfusion. Annette [de la Renta] said they couldn’t come to [dinner], but he did come. When he sat on the sofa he said, ‘I’m so glad I made it again.’ That was the last proper meal he had. Today I would like to speak to all of you as if Oscar was speaking to all of you. He loved life, he really, really did. He loved to sing and he loved flowers and beauty. He loved to be mischievous and make fun of people. He was the best gossiper and the only way we can honor him is by all of us loving life and fashion and gardens and being full of life and enjoying life and the wonderful person he was. I don’t usually cry.” DvF finished her speech welcoming Copping to New York and the OLDR house telling the crowd how proud Oscar was of his choice. A warm welcome to a new star in town.