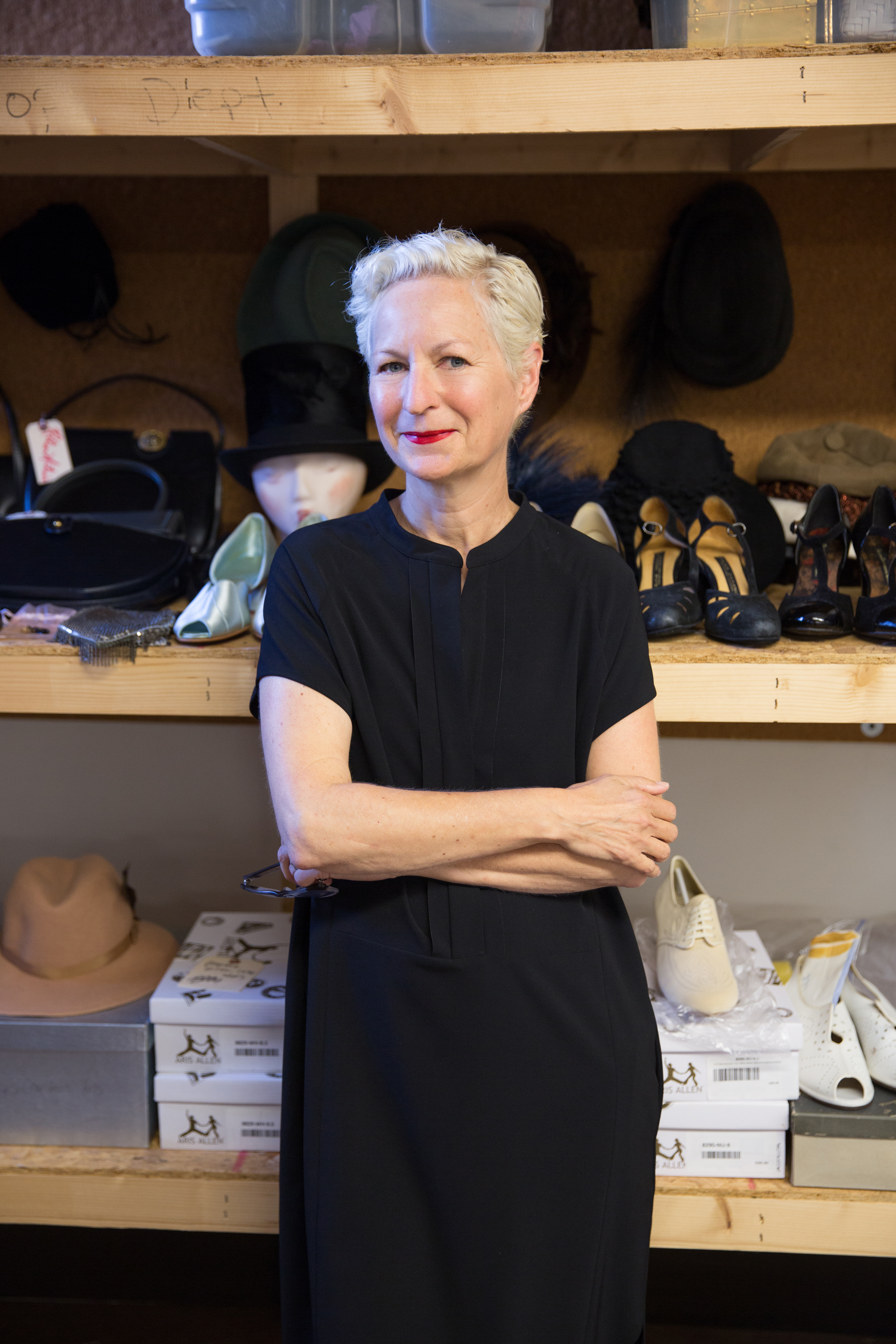 Emmy-winning costume designer Lou Eyrich took a breather from doing research at a storied LA costume house to give us a behind the scenes glimpse at FX’s Bette Davis vs. Joan Crawford spectacle, Feud.

Where does costuming for a show like this begin?
Because we were recreating a historical event, we weren’t creating characters, so the research dictated our tone. But we made up our own color palettes, because a lot of our references were in black and white.

How did you get to know Joan and Bette?
I read a lot of books and researched on the Internet—it’s amazing what’s out there. I didn’t have any real knowledge about either of them, other than watching some of their old movies, before I started this project.

Which designers or labels did you reference?
Edith Head designed some of the dresses and gowns for both Bette and Joan, so I looked to her designs. Neither of them was really designer exclusive, so I mainly searched for good sources that carry good ‘60s vintage in contemporary sizes.

Which were your go-to vintage shops?
In LA, we have so many great costume houses, and every three months there’s the vintage fair, A Current Affair. As far as shopping, The Way We Wore, Golyester, Decades, Regeneration, The Paper Bag Princess, Cannonball and Tilly, PlayClothes, Slone, and Swift.

How many custom pieces did you create?
About 20 percent of the costumes; 40 percent was made to order, and the rest we purchased or rented.

What was the biggest challenge?
The sheer volume of clothes and costume changes, because every episode spans three to five decades, from the ‘30s to the ‘70s. Some costumes might be on camera for a matter of moments, but we still had to custom pull it or design it from head to toe, from the purse to the coat and gloves to the matching earrings, necklace, and bracelet.

Do you have a favorite look?
It might be Hedda’s hats. They were so fun! Normally, we don’t want a hat to be such a scene-stealer, but we wanted to show her quirkiness. We added feathers that moved every time she moved her head. We found most of them at The Way We Wore, and many are vintage Jack McConnell.

What was it like recreating the gown Joan wore to the Oscars?
There wasn’t the budget or time to have a hand-beaded dress made, so we sourced the fabric—we only had a matter of days to find it—then we dipped it to be more silver, and found a great silver lining. Our tailors added a whole bunch of custom beads in the front to give it a pop from the waist up. We had to search all over for a silver fox fur to go with it, and one of my delightful assistants went on a jewelry hunt to find pieces similar to the originals.

How much time do you have to put these looks together?
Usually four days or less.

How did you choose which fabrics to use?
When we were replicating Bette’s Margo Channing All About Eve dress, for example, we studied the photos to see how the clothes draped. I worked very closely with my tailor, and she’s a whiz at this stuff. We start draping it on forms to see if the fabric actually worked.

Do Jessica Lange and Susan Sarandon get involved in the costuming?
They have a strong sense of character and they definitely have opinions. Jessica will say, I don’t think Joan would wear that when Hedda comes because I think she would get dressed up. Or Susan will say, I don’t want to wear a dress sin this scene—I think a capri and a sweater is much better because of this and this. I always trust their instincts.

Do you ever tell them you disagree?
I’m not afraid to say, I see what you’re saying but I disagree. They’ve been doing this a long time, so they probably know better than I do!

So…Team Bette or Team Joan?
I can’t choose! I love them both equally.

How did you get into this business in the first place?
My first job was touring with the Manhattan Transfer. I met the stylist who was working with them when I was visiting a friend on the road, and when she had to leave, they hired me. I started touring with them and doing their costumes, not really knowing what I was doing. Right after that I worked on a Prince movie, Graffiti Bridge, and then Prince went on tour, so I got to jump on board that too. After touring for six years, I decided I wanted to stay in town.

Introducing Fitz, The Closet Organizing and Styling Company You’ve Been Waiting For