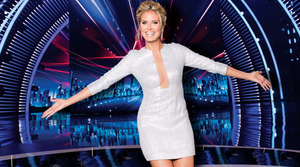 (NEW YORK) Remember when Heidi Klum was just another gorgeous supermodel? Today, as host and executive producer of Project Runway, she has a bigger impact on fashion than a dozen critics combined.
BY EDDIE ROCHE

Obviously, everybody knows you from Project Runway, but the Michael J. Fox show Spin City was really your first time on American television…
I thought it was going to be much easier than it was. I had never acted before or memorized any lines since I was a little kid in school. I had a hard time. They booked me because I was on the cover of Sports Illustrated. We did a read-through and I was super-intimidated and stuttering through it. It was obvious that everyone knew it was going to be hard with me. They asked if it would be OK if they got me an acting coach, and if I was open to any help they could throw my way. I had no idea what I was doing!

The acting coach must have helped, because they extended your role…
I ended up doing it for six weeks. I loved Michael. I remember that in our first scene, I had that deer-in-the-headlights moment where I couldn’t remember my name. I came on the set in front of the audience and Michael could just see the fear in my face. He ended up stopping the scene and said that he wanted to start over, but it was to save my butt. Nobody ever knew. He totally took the blame. It was awesome.

What were some of the fun memories?
We had a bedroom scene together and pretended we just had sex. We were fully in cream-colored body suits under the covers. I always thought when they filmed bed scenes that you’d be in your underpants. We had on long johns!

Did you set out to pursue an acting career after that?
Then I packed my bags for Los Angeles with the singer Kelis who did the “Milkshake” song. We were both there for about three months wanting to act, but we were just running around going to castings all over the place. Getting cast seemed like a whole different job. There were so many good people who were good at their craft and I figured out pretty quickly that I wasn’t.

Until Project Runway came along…
Being on television in this role was a whole new chapter. We got a lot of great feedback when we started because you could see behind the scenes how clothes were being made. There wasn’t anything like that on TV before. We were onto something new. It was a word-of-mouth show that grew year after year, and got bigger and bigger. We had a moment when we changed networks from Bravo to Lifetime when people had trouble finding us again, but now we’re back in the swing of things… We’re full steam ahead!

What’s your role as the executive producer?
I participate in the meetings about what we’re changing, we talk about the challenges and what we can do differently, we think about what the fans want. They always want more Tim Gunn, so this year we gave them more Tim Gunn! He’s never watched a show in the runway room with the designers before, so now we’re having him do that. We’re always asking what kind of people we can bring onto the show. We have a lot of companies that want to participate, so we think of how we can incorporate them.

What do you think appearances on the show do for insiders?
It speaks for itself that people in the industry like the show because that’s why they’ve been participating. A lot of designers have a face now. Not everyone knew what designers looked like. People didn’t know what Michael Kors looked like. We’d have Roberto Cavalli on the show and people didn’t know what he sounded like. Francisco Costa was on in the early years. People thought Calvin Klein still designed for Calvin! Twitter didn’t exist then, so designers had a voice before they had that social media element.

What has Zac Posen added to the show?
Michael’s chair is a hard chair to fill. He is a genius, and super-funny. There will never be someone else like him. You can’t exchange people. I always get mad at people who say that Zac isn’t Michael Kors. No, he’s not! Zac is Zac. He’s young, knowledgeable, and it’s taken him two seasons to relax a little and be more free. He’s never done television like this before. It’s a whole different thing and he’s doing a fantastic job.

And you’re still doing Germany’s Next Top Model?
Yes, we shoot 17 episodes. That’s a long time. It’s a two-hour show, but we shoot it in L.A. You can shoot that show anywhere. I’m also an executive producer on that show and do all the commentary. I can do that from home.

How did America’s Got Talent come about?
They asked me to come in for a meeting to meet the producers. I was excited to hear they were looking for a new judge after Sharon Osbourne left. I’ve watched the show before, and my kids are now at an age where they watch television, [too]. During the meeting they asked me what I thought of the show and it felt almost like auditioning for something again. I didn’t hear anything for awhile and then it was announced that Mel B was going to be the judge and I thought, OK. Then we got the call that they were going to take me as well and extend the panel to four.

So what’s it like to crush someone’s dreams?
You want to be liked by people, and you always get judged by how you look or if your body is great. I’m in the public eye, but when you are judging the contestants, I didn’t realize how much I’m being judged for judging them. If I don’t like something and want to be honest and say that I don’t like something and then four thousand people boo me…that’s a hard pill to swallow.

Have you ever done anything live like this before?
Germany’s Next Top Model finale has a live audience in a stadium of 15,000 people. The audience isn’t as crazy. Since AGT started, the booing has always been a big part of the show. Radio City is the stage of all stages!

How’s it working with Howard Stern?
He’s hard on the outside and very soft in the inside. He’s a gentle person. I see how loving he is with his wife and how he cares for animals. He’s a good person who sometimes can’t help himself. He asks questions that most of us are too afraid to ask. Sometimes he burps and does odd things that I don’t really understand, but that’s Howard. He’s burped in my face, but he hasn’t farted in front of me yet. I think I’ll take the burp over that. Are you going to ask me about Howie [Mandel]?

Are you conservative?
I am with my family and children. I don’t curse around my kids. I’m very traditional and old-fashioned when it comes to language and food and table manners. Nudity, not so much. I’m European and I’m more free with children and with children being nude. Not with friends or anything, but within the family…

Your Instagram selfies of you baring skin have made the news…
If it’s too much, stop following me. When mainstream outlets like Access Hollywood or Entertainment Tonight show those [racier] pictures of me, maybe they shouldn’t do it. What I post is for my fans. I’ve been a swimsuit model for almost 20 years. I’ve been body-painted 12 times. I didn’t do cooking magazines. I did a lot of sexy things in the past. [On social media you] aren’t going to see anything worse of me than what’s already been out there.

What did you do for your 40th birthday this summer?
I had a fancy hat party at the Bel Air Hotel with my girlfriends. All the ladies had to wear hats like at a Derby party. I had three top hats that were custom-made. I love a theme party. I used to do dinners where everybody had to wear a wig just randomly. It instantly changes a party to something sillier.

And you’ve turned into a designer with your Babies “R” Us line?
It’s one of my most fun projects that I work on. I can’t bedazzle a grown-up the way I can bedazzle a kid. I’m always, like, “More rhinestones!” Kids have more fun in the way they dress. It’s bright and sparkly. Unless you have a goth kid… We’re doing our first fashion show in October for Kids’ Fashion Week. I’m going to take a bow. Why not?