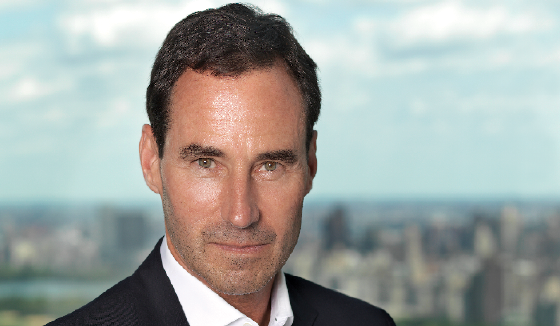 In the perpetual race for ad pages, ELLE publisher, chief revenue officer, and SVP Kevin O’Malley leads the pack. Shortly after closing the heftiest issue in Hearst history, with pages up a whopping five percent, the Esquire alum took a breather to reflect on his immersion in the women’s market after eight years in men’s, why tech is his top priority, and what he’s like as a boss.
BY ALEXANDRA ILYASHOV

Why did you take this job at ELLE three years ago?
I knew it was a very well-respected global brand, and from the outside looking in, I’d always liked its energy and vibrancy. I was on the menswear side for eight years at Esquire. When Hearst purchased ELLE from Hachette, senior management asked to speak with me about a new opportunity. I had no idea what it would be. They asked me to move over to ELLE, and I said, “Well, I’m very flattered, but you’re crazy! You probably should get one of the women’s magazine publishers to do that.” But they wanted me.

Was there a major learning curve, swapping a men’s book for a women’s title?
A range of clients do both men’s and women’s, whether it’s Armani, Prada, or Estée Lauder. But the beauty industry is just exponentially bigger than the men’s fragrance and grooming industry. A core reason they had asked me to move over was that I had a depth of knowledge of the luxury industry. Also, assimilating ELLE into Hearst’s culture was very important.

Did you have any reservations about the new gig?
I was a little hesitant, because I enjoyed Esquire so much. I had a great relationship with its very dynamic editor-in-chief, David Granger. The clincher was meeting Robbie Myers; I’d never met her before. We had a secret lunch at Robbie’s favorite restaurant.

Which is…?
Well, that’s secret! I’m sure someone will figure out where it was. About five minutes into the lunch, I knew I was going to take the opportunity. Robbie has full command of ELLE’s essence, voice, and DNA. I’d done my homework, reading three or four issues cover to cover. I was very pleasantly surprised by ELLE’s intelligence and smartness. Whether it’s a beauty piece or a relationship psychology feature, it’s such gender-neutral, non-cliché, interesting writing. I got such an immediate sense of Robbie’s great range. That’s very important, as a magazine and as a person. Robbie is a naturally curious person, and that’s reflected in the magazine.

Once you accepted the gig, what was your plan?
First, I had to listen and learn through immersion. ELLE was not a brand that needed to be fixed, in any way; it was flourishing. It was the crown jewel in the Hachette portfolio, and the core reason Hearst wanted to purchase it. I’m a pretty intuitive marketer, so I had the skill set, but I didn’t pretend I knew the women’s market.

Did you have an ELLE boot camp of sorts?
I realized I knew a lot more than I’d given myself credit for! I know quite a bit about accessories, because I’ve been a big fan of women’s shoes. No fetish here! I’ve been purchasing shoes for my wife for years. I went to the first round of shows with Robbie three months after joining ELLE. I listened to the team talk about the shows and trends. I started playing a game with Robbie after shows—I’d say something like, “So, Robbie, I noticed this, is that…?” She was kind enough to let me test myself, and so were editors like Anne Slowey and Joann Pailey.

How does the hommes circuit compare?
Men on the runway is just not that exciting; it’s pretty straightforward. Menswear is glacial—nothing of note happens from season to season. It’s all, “The lapel gorge has dropped. The shoulder has gotten a little softer; there’s not as much rope. The shirt’s placket has been narrowed.” It’s all incredibly detailed and nuanced. I can look at a men’s jacket and tell you whether it was Hugo Boss, Armani, or Zegna, just by looking at its silhouette. That takes years to learn! At women’s shows, there’s short, long, color layering—the trends hit you over the head.

How did ELLE acclimate from Hachette to Hearst?
The culture at ELLE back at Hachette had a very entrepreneurial spirit, and I loved that. It was a scrappy, resourceful spirit that always resonates with me. That’s one of the reasons David Granger and I worked so well together: We’re both such “we’ve got to figure this out” sort of people and managers. I just tried to build and amplify that, and add smart people. I made some management changes, but I didn’t do a full, clean-house type of thing. It wasn’t necessary.

What kind of boss are you?
I give as much direction as possible and am a very detailed person, but once I think somebody’s got it, I’m like, “Do it. Own it. You told me you were going to own it, so I expect you to own it.” People really feel like they have to challenge themselves here. We are the fourth-largest ad value brand in the U.S.—People, InStyle, Vogue, ELLE. We’re a machine. The machine is a beast, and the beast needs to be fed with ideas, ambition, and natural curiosity.

What’s the biggest challenge?
Finding growth in a mature brand that’s already at a high value. I’m very proud that the ELLE staff has found a way to do that. We’ve had a phenomenal growth in my first three years here.

Let’s talk numbers.
For two consecutive years, we’ve published ELLE’s largest issues—this year was the largest issue ever published by this company in 127 years with our September issue. That’s not easy to do with a mature property! ELLE has always been a really progressive multichannel brand, and we’ve continued to drive that. We’re also sitting at a new high for ELLE.com—nearly 12 million uniques. That’s a big base for a magazine website, and we’re leveraging it. Our ad base has responded to the site’s success, and ELLE.com is a significant part of our overall topline revenue.

What were you proudest of during your time at Esquire?
For the magazine’s 75th anniversary, David Granger and I did the first-ever cover to use e-ink technology, which now powers basically every Kindle and e-reader. Now it looks archaic, but that was as far as technology had come in 2008, and we used it.

Do your client meetings these days feel different than when you were at Esquire?
Very often, I’m in front of the same clients, especially in Europe. I’m still traveling a lot to London, Milan, Paris, though I don’t travel to Florence anymore since it’s sort of a men’s hub.

What’s the toughest part of your gig?
My biggest challenge is trying not be an expert in any one field, and instead to be conversant as a marketer. I have to know different industries, brands, and competitive set; I think most publishers would say that. In New York, I could have meetings with Estée Lauder and Gucci fashion, then I’m over to see Saks. In San Francisco, it could be Amazon, Banana Republic, visiting a venture capital firm, then going down to Los Angeles to meet with Lexus and Guess. Lexus couldn’t care less about the fact that I compete so aggressively with InStyle and Vogue; that’s not their concern. Their concern is, do you know how much market share BMW and Audi took from us last year?

How do you stay on top of so many different fields?
Do your homework. Really understand all those industries! I do a lot of Google, a lot of Wiki, a lot of working with my very, very smart and ambitious assistant to help me find all this information. She helps me distill it, putting it all into packets of sorts.

How do you find the time to do your homework?
I never watch movies on planes. I’m always reading background information on an industry, brand, or new technology. Coming back from Europe a few trips ago, I actually watched a movie. You know what? It was really fun.